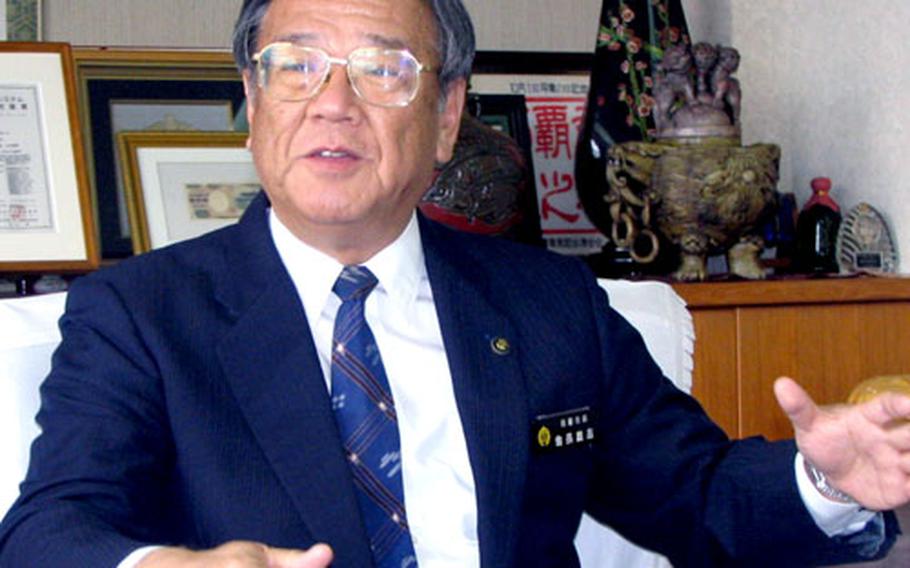 The two-term Naha mayor says the small volcanic island, famous for being the site of one of the bloodiest battles fought by U.S. Marines in the Pacific during World War II, would be a perfect relocation for Marine Corps Air Station Futenma.

The island already has a Japan Air Self-Defense Force air base with a 2,600-meter runway and no civilians to complain about noise or the hazards of living under flight lines, Onaga claims. On Tuesday he said he will seek to win support for his proposal from other municipalities and Tokyo.

Iwo Jima, which lies some 775 miles south of Tokyo, is an administrative district of Tokyo, part of Ogasawara village. It is about 855 miles east of Okinawa. Onaga said he has already met with the mayor of Ogasawara, who offered his support.

Onaga said a visit to Iwo Jima in December convinced him that it could be a satisfactory alternative.

&#8220;Using Iwo Jima as one of the sites to move the Marine Corps operations will facilitate the quick closure of Futenma air station,&#8221; he said. Naha is the capital of Okinawa prefecture.

The U.S and Japan agreed in 1996 that MCAS Futenma, located in the middle of the island&#8217;s urban corridor, should be moved to a more remote location on Okinawa. After years of haggling, the two sides agreed in October to build a heliport on Camp Schwab in northeast Okinawa and transfer fixed-wing aircraft to Marine Corps Air Station Iwakuni.

Also, Japan Self-Defense Force bases on the Japanese mainland would be improved and made available for joint use.

However, that plan has been met with stiff resistance from prefectural and municipal officials on Okinawa and mainland communities.

Onaga insists that Iwo Jima is a viable alternative.

&#8220;Under the present circumstances, it would take another five to 10 years before the Futenma air station can be closed,&#8221; he said. Meanwhile, the existing JASDF facility on Iwo Jima is ready now.

About 400 JASDF personnel are permanently stationed on Iwo Jima, which also is used by the U.S. Navy for night-landing practice, Onaga said.

&#8220;They live on the island with good accommodation and recreation facilities,&#8221; he said.

&#8220;To my eyes, the plan to build an airport on Camp Schwab is far from being feasible,&#8221; he said. Placing part of it on landfill in Oura Bay creates environmental concerns and the necessary environmental and cultural surveys of the area would take years to complete, he said.

&#8220;There are four archeological sites in the area where the airport is planned,&#8221; Onaga said.

Onaga is set to meet with Tokyo Gov. Shintaro Ishihara on Friday to discuss his proposal. He also plans to visit the mayors of Iwakuni, Kanoya and other municipalities affected by the interim realignment report.

Spokesmen for Marines on Okinawa and U.S. Forces Japan had no comment on Onaga&#8217;s suggestion. In the past, Okinawa Marine officials have said that any Futenma replacement facility built on Okinawa that allows them to complete their mission would be acceptable.

The October interim report on realignment stressed that the relocation facility &#8220;must be located within Okinawa prefecture where rotary wing aircraft currently stationed at Futenma Air Station will be near the other elements with which they operate on a regular basis.&#8221;