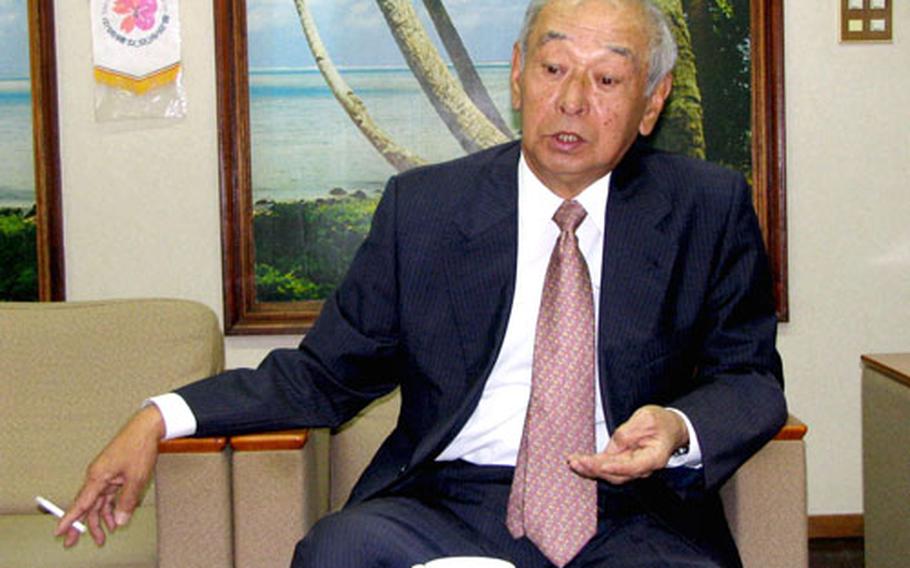 Hirokazu Nakaima, Naha Chamber of Commerce and Industry chairman, says closing U.S. bases on Okinawa south of Kadena Air Base will “hurt the local economy in the short-term but a large scale base closure will consequently bring much business opportunity.” (David Allen / S&S)

NAHA, Okinawa &#8212; As the deadline nears for a final plan to realign U.S. forces in Japan, the return of major bases in southern Okinawa is becoming more of a sure thing, Japanese officials say.

And the Okinawa business community already is studying what to do with the land &#8212; everything from making the island a gambling haven to creating the Western Pacific&#8217;s new information technology hub.

&#8220;It might hurt the local economy in the short-term,&#8221; Hirokazu Nakaima, Naha Chamber of Commerce and Industry chairman, told Stars and Stripes recently. &#8220;But a large-scale base closure will consequently bring much business opportunity to Okinawa.&#8221;

According to a bilateral realignment plan released in October, moving 7,000 to 8,000 Marines from Okinawa to Guam and mainland Japan and replacing Marine Corps Air Station Futenma with a new facility on Camp Schwab will enable closing most U.S. bases south of Kadena Air Base, in the island&#8217;s most populous areas.

Realignment details are to be finished by the month&#8217;s end. To be returned are MCAS Futenma, the rest of Camp Lester, parts of Camp Foster and all of Camp Kinser and the Naha Military Port.

&#8220;There are some obvious and direct impacts on some people and businesses, such as housing agencies and taxi companies that cater to Americans and utility companies when more than 10,000 Americans leave the island,&#8221; he said. Landowners also will take significant hits from losing income from property they now lease to the U.S. bases.

Still, he maintained, &#8220;In the long range, it will make various development plans possible&#8221; and there are several &#8220;great locations with great potential."

For example, the 138-acre Naha Military Port near Naha International Airport would be &#8220;extremely suitable for industrial development,&#8221; according to an Okinawa Prefectural Government report. It&#8217;s been slated for return to its 999 landowners since 1974 but lack of a suitable replacement site hasn&#8217;t been found.

&#8220;We want to invite the information-technology industry in the United States to open businesses here. In the past five to six years, we have attracted more than 100 IT-related companies," he said, adding that overhead &#8220;would be between half and one-third of the cost in Tokyo.&#8221;

He said Okinawa already has a thriving tourist industry and is becoming a retirement haven &#8212; both of which could be expanded on returned bases.

A casino industry also is in the cards, he said, although &#8220;a consensus concerning casino gambling is yet to be established here.&#8221;

But Nakaima predicted that a U.S. military presence, though reduced, will remain on Okinawa &#8220;for the next 100 to 200 years&#8221; as a stabilizing factor in the Asia-Pacific region.