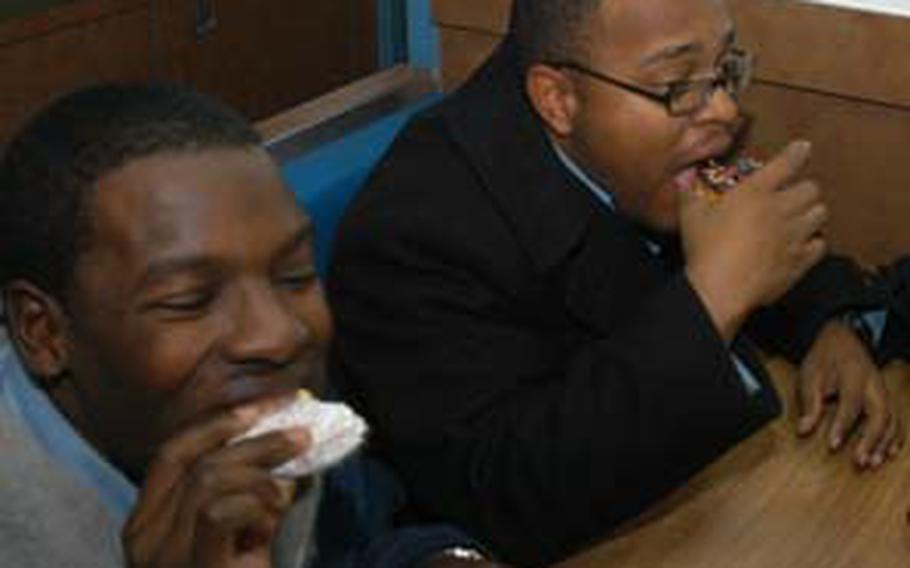 Petty Officer 3rd Class Leonard Williams, left, and Petty Officer 2nd Class Terrence Rudd chow down on free doughnuts aboard the USS Shiloh on Friday. Carmen Colon, a Brooklyn woman who went to high school with one of the ship&#39;s sailors several years ago, teamed with United Service Organizations to buy 408 doughnuts for the crew. (Erik Slavin / S&S)

YOKOSUKA NAVAL BASE, Japan &#8212; Very few of the sailors aboard the USS Shiloh knew who paid for the 408 doughnuts that showed up in their mess hall on Friday.

But judging by all the jelly-glazed smiles and sugar-dusted fingers, a Brooklyn woman&#8217;s gift to a ship she&#8217;s never even seen was greatly enjoyed.

With help from United Service Organizations, Carmen Colon purchased $240 worth of doughnuts for the sailors &#8212; something she says made her feel so good, it was like buying a Christmas present for herself.

"Wherever they&#8217;re serving &#8230; I want to say that we appreciate you, we miss you, and we can&#8217;t wait for you to come home," Colon said last week from her home in the Bedford-Stuyvesant neighborhood.

One year ago, Colon reconnected on Facebook with a friend she graduated from Brooklyn Technical High School with nearly 30 years ago.

Colon&#8217;s friend is now a master chief petty officer aboard the Shiloh. She asked if there was anything she could send him, but he always declined.

She kept up with her friend&#8217;s descriptions of life aboard the Shiloh through the summer, when tragedy struck. On July 8, Petty Officer 1st Class Christopher Geathers died while on duty.

Colon heard how devastating the loss was to the crew and resolved to do something for the sailors. When the Shiloh returned from sea last month, Colon&#8217;s opportunity came.

However, Colon&#8217;s focus isn&#8217;t just on the Shiloh. She plans to spread the word and would love to see every command "adopted" like the Shiloh.

"I love them, but I love the entire base, too," Colon said.

Shiloh sailors said they were sure other ships would happily accept the support.

"Some people here go straight to work in the morning, and to be able to take a break and enjoy free doughnuts &#8212; it really makes me feel like somebody cares," Seaman Amber Cage said.