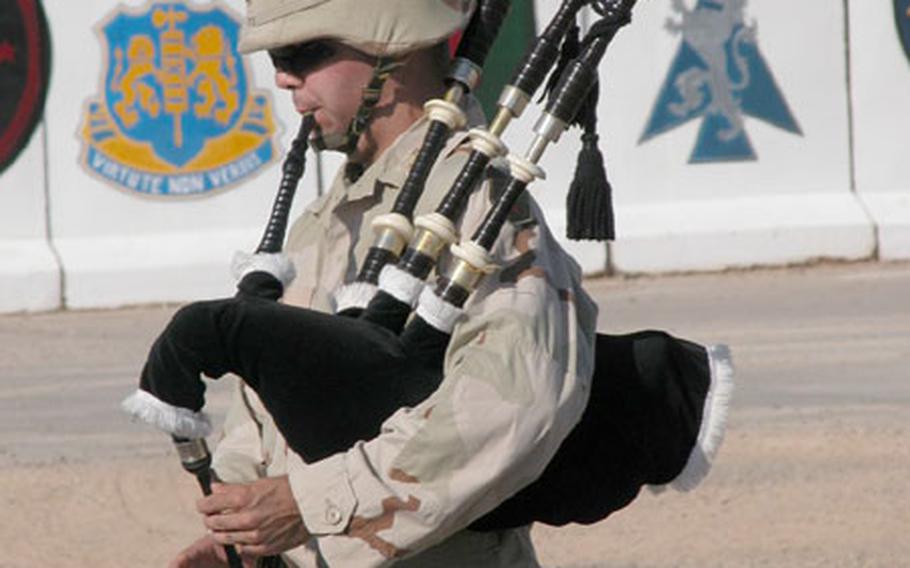 Second Lt. Lee Tate, of Stanton, Va., plays “Amazing Grace” on the bagpipes during a Sept. 11 ceremony at Forward Operating Base O’Ryan, near Balad. The base is home to the New York National Guard’s 2nd Battalion, 108th Infantry Regiment. (Lisa Burgess / S&S)

FORWARD OPERATING BASE O&#8217;RYAN, Iraq &#8212; Sept. 11, 2001, has a special meaning for hundreds of deployed military members who were either witnesses to or involved in the immediate aftermath of the attack.

But perhaps the day means the most to 50 or so of the soldiers of the New York National Guard&#8217;s 2nd Battalion, 108th Infantry Regiment.

These men were part of the New York National Guard who were the first military responders to the New York disaster, said Task Force 2-108th commander, Lt. Col. Mark Warnecke, of Saugerties, N.Y. The guard unit helped secure a perimeter around the New York crash site immediately after the attack.

Now the 2-108th, an air assault battalion, has been deployed to Iraq as &#8220;Task Force Hunter&#8221; at Forward Operating Base O&#8217;Ryan, near Balad. The unit is under the control of Capt. Randal Dragon of Arlington, Va., commander of the 1st Infantry Division&#8217;s 2nd Combat Brigade Team.

After the initial attacks on the twin towers, the N.Y. guardsmen were asked to provide security for airports, bridges, nuclear facilities, and other key places around the state.

But the memories of what started it all will never go away.

Mundt, who was then the division chief for the section of the Army that deals with aviation issues, was just leaving the Pentagon to attend an Army Aviation transformation meeting with the National Guard building on the day the terrorists attacked the United States.

As he was leaving the South parking lot, Mundt, of Colorado Springs, Colo., saw the aircraft as it made its fateful turn from the highway and towards the building.

&#8220;It was all shattered on Sept. 11,&#8221; Mundt said during a morning ceremony at Speicher to dedicate three separate memorials to both the victims of Sept. 11, and the military members who have been fighting the war on terror ever since.