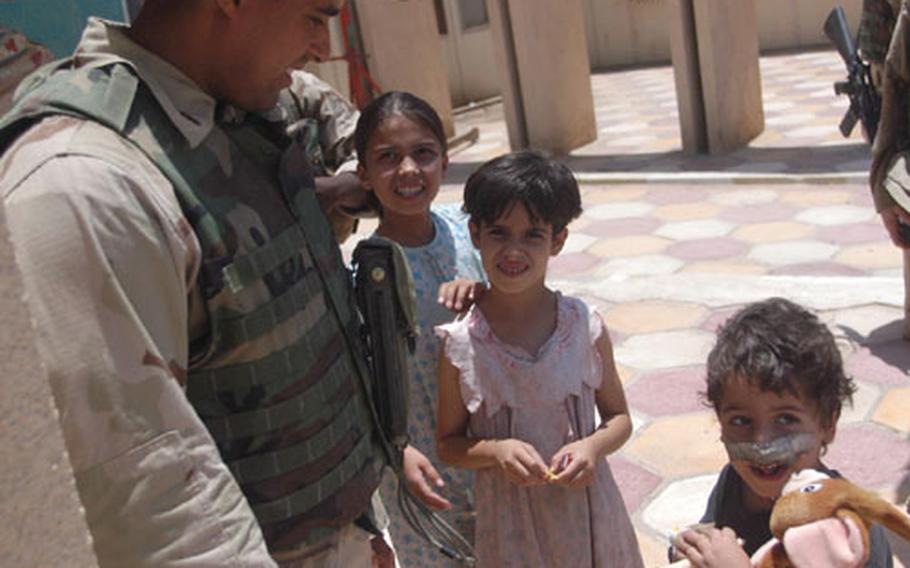 Cpl. Pablo Hernandez with the 2nd Battalion, 25th Marine Regiment in Nasariya, greets a boy at the Women and Children&#39;s Hospital in town. (Juliana Gittler / S&S)

At the Women and Children&#8217;s Hospital in Nasiriyah, Iraq, a little boy with a bandage across his nose looked up at the tall Marines around him. With his arm wrapped around a new teddy bear, he smiled under the grimy bandage.

The Marines, like their counterparts in other provinces, have helped hospitals, restored power, rebuilt schools and worked to bring the impoverished and war-torn region to livable standards.

But unlike the battalions and companies scattered across Iraq, these Marines are doctors, lawyers, cops, federal agents, business owners and engineers.

Having seen the damage first hand, they may be more deeply affected by the Sept. 11, 2001, attacks on New York than most servicemembers in Iraq.

The 2nd Battalion, 25th Marine Regiment is a Reserve infantry battalion based in Garden City, N.Y., with members from New York, New Jersey and Pennsylvania.

Many of the unit&#8217;s firefighters and police were first responders to the World Trade Center after the structures were attacked. The battalion lost a member from its anti-armor platoon, a New York City firefighter, when Tower One collapsed.

The attacks compelled many in the battalion to come to Iraq to fight terror and terrorist-friendly nations.

After 9/11, the unit was called up to Camp Lejeune, N.C., for nearly a year. In December, the members returned home for three months before they were activated again and sent to Iraq in support of Operation Iraqi Freedom.

If they get to go home soon, as planned, they will have been activated 17 months, longer than most Reserve units so far.

The unit is scheduled to be replaced by an Italian task force under British command in the next few weeks, in one of the first provinces to change hands.

The battalion&#8217;s efforts have been felt here in the Dhi Qar province that includes Nasiriyah: Power restoration projects expanded electricity from three hours a day to 23; food, water and fuel are available; and buildings have been restored.

As a Reserve battalion, members have wide-ranging backgrounds and skills. Many are older than a typical infantry battalion member, offering a greater maturity, they said.

&#8220;As a Reserve unit, we have the unique ability to tap into our civilian backgrounds,&#8221; said Maj. James Schutta, assistant operations officer.

When there was a need to start a police academy to train local cops, the battalion tapped the unit&#8217;s 30 police officers &#8212; 12 from the New York Police Department &#8212; who understand rules of engagement and use of force.

Their skills also helped improve their own quality of life. An air-conditioning engineer is a great asset in the brutal Iraqi heat. Construction workers built shower facilities and other amenities.

&#8220;When we all pull into an area and come together, two days later we&#8217;ve got a castle,&#8221; said Cpl. Pablo Hernandez, also from Brooklyn and with the weapons company. As a civilian, Hernandez works as a pilot.

The group is united by a famous hometown with a distinctive character. And you can&#8217;t miss that accent.

They can reminisce about a certain neighborhood bar or pizza restaurant, or a pivotal play in a Yankees game.

Being from New York also gives the Marines a certain toughness and adaptability, Hernandez said. After all, if you can make it there, you can make it anywhere, including Iraq.

The relative safeness of Dhi Qar doesn&#8217;t detract from their training and readiness. The infantrymen all carry weapons and conduct patrols like everybody else.

The group loses out to active-duty troops in some ways. As reservists, they don&#8217;t live, eat and work together at home like an active-duty battalion would, said James, a former active-duty Marine. So the group lacks some cohesiveness.

But background and circumstance bring them closer, Morris said. That won&#8217;t end with their tour to Iraq.