N. Korean missile test raises questions about why allies didn't try to shoot it down 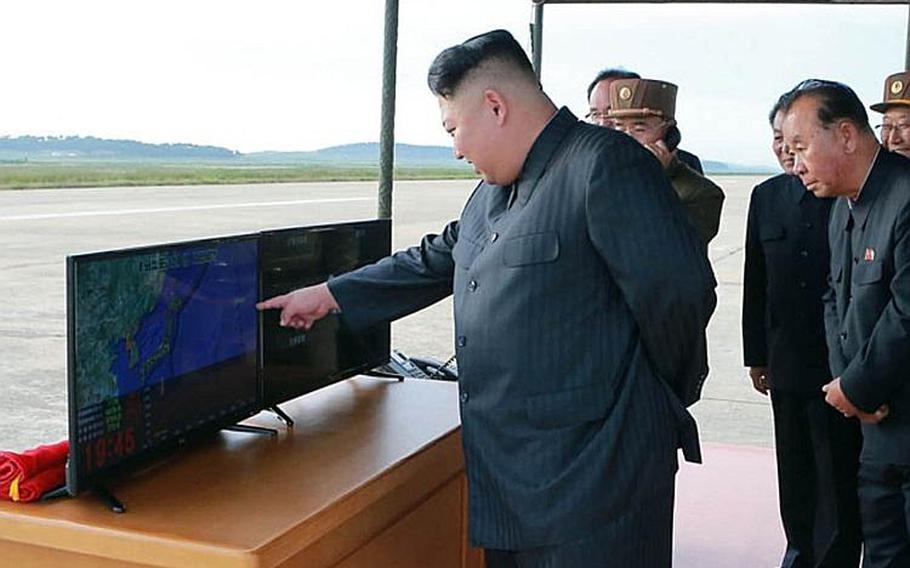 This image of North Korean leader Kim Jong Un and other officials was released by the Korean Central News Agency a day after Pyongyang test-fired a missile over Japan on Friday, Sept. 15, 2017. (Courtesy of KCNA)

This image of North Korean leader Kim Jong Un and other officials was released by the Korean Central News Agency a day after Pyongyang test-fired a missile over Japan on Friday, Sept. 15, 2017. (Courtesy of KCNA) 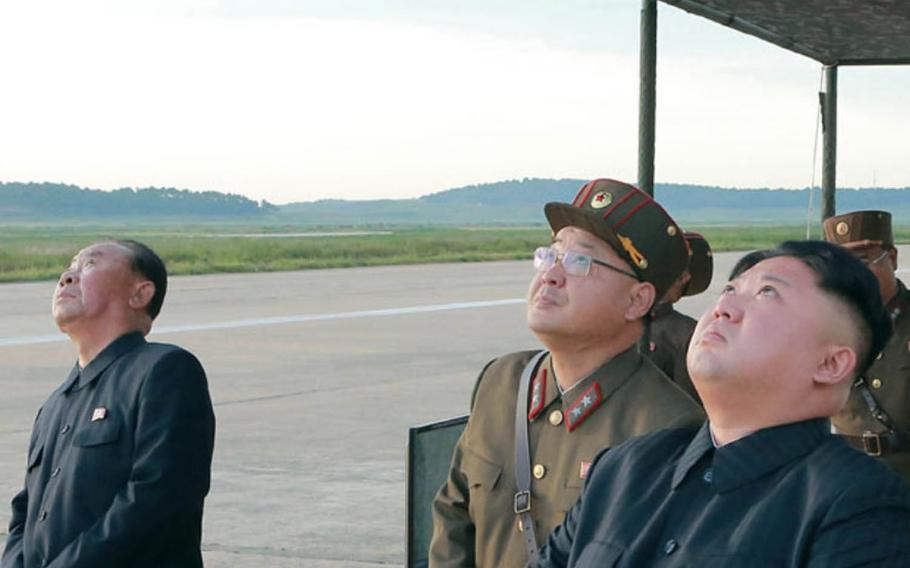 This image of North Korean leader Kim Jong Un and other officials watching a launch was released by the Korean Central News Agency a day after Pyongyang test-fired a missile over Japan on Friday, Sept. 15, 2017. (Courtesy of KCNA) 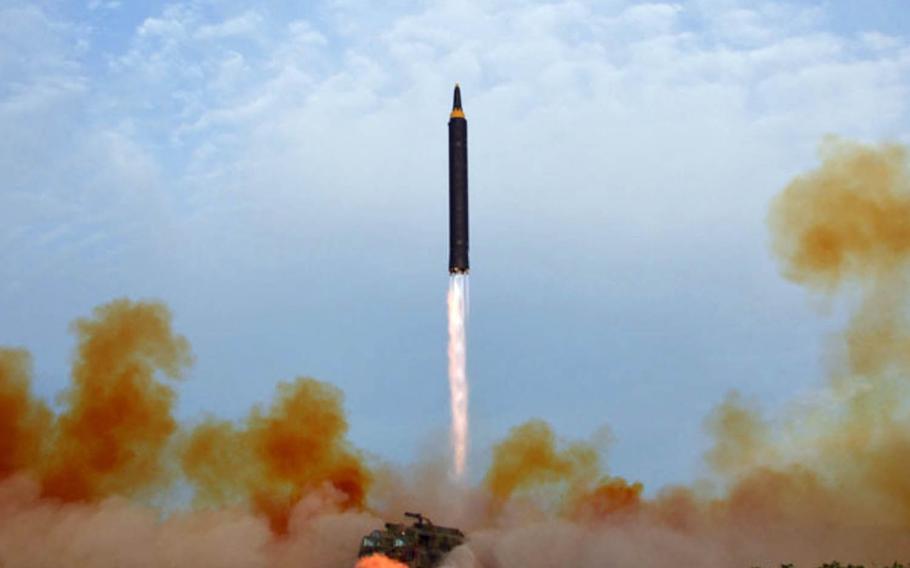 This image was released by the Korean Central News Agency a day after North Korea test-fired a missile over Japan on Friday, Sept. 15, 2017. (Courtesy of KCNA) 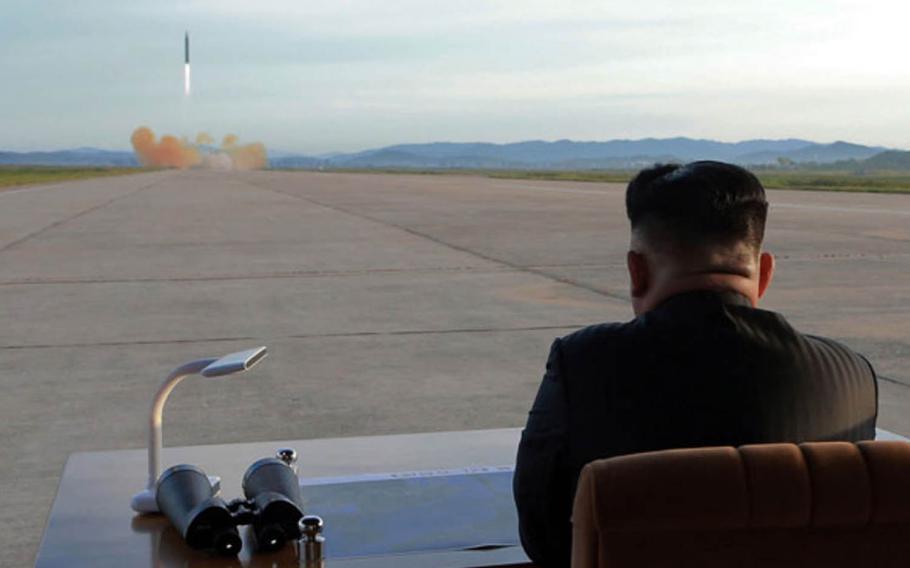 This image of North Korean leader Kim Jong Un watching a launch was released by the Korean Central News Agency a day after Pyongyang test-fired a missile over Japan on Friday, Sept. 15, 2017. (Courtesy of KCNA)

SEOUL, South Korea — The United States and its allies knew the North Koreans had fired a missile and tracked its path over Japan last week. Sirens blared in Hokkaido, and the Japanese government urged people to take cover.

The advance warnings — with one report saying Vice President Mike Pence saw pictures of the missile a day before it was launched on Friday — raise questions about why the U.S. and Japan didn’t try to shoot it down.

It was the second missile to fly over Japan in less than three weeks and sent a clear message of defiance to the U.N. Security Council, which had just four days earlier unanimously adopted tough new sanctions aimed at punishing the communist state for a Sept. 3 nuclear test.

The 15-nation council condemned Friday’s missile test in an emergency session and called on all countries to “fully, comprehensively and immediately” implement all U.N. sanctions. New measures included a cap on oil imports and a ban on textile imports but fell short of the original U.S. proposal for a full oil embargo due to opposition from China and Russia.

North Korean leader Kim Jong Un, meanwhile, declared the launch a success, saying it showed his country was nearing its final goal of establishing “the equilibrium of real force with the U.S.” and preventing U.S. rulers from talking about military options – an apparent reference to President Donald Trump’s warnings that he’s prepared to unleash “fire and fury” on the communist state.

The North insists its weapons program is necessary for self-defense.

“We should clearly show the big power chauvinists how our state attain[s] the goal of completing its nuclear force despite their limitless sanctions and blockade,” Kim was quoted as saying Saturday by the state-run Korean Central News Agency.

Trump planned to meet with the South Korean and Japanese leaders to discuss the issue during a luncheon summit Thursday on the sidelines of the U.N. General Assembly, according to the White House.

“America and our allies will never be intimidated,” Trump said in a wide-ranging speech Friday marking the 70th anniversary of the Air Force at Joint Base Andrews, Md.“We will defend our people, our nations and our civilization from all who dare to threaten our way of life. This includes the regime of North Korea, which has once again shown its utter contempt for its neighbors and for the entire world community.”

“We’ve been kicking the can down the road, and we’re out of road,” McMaster said Friday at a joint press briefing in Washington. “And so for those who have said and have been commenting about the lack of a military option, there is a military option.”

The missile reached a maximum altitude of 480 miles and traveled about 2,300 miles before splashing into the Pacific Ocean after flying over Hokkaido, officials said.

It was the farthest distance achieved by a North Korean ballistic missile and followed 13 other tests this year as Kim’s regime has dramatically stepped up the pace of its nuclear weapons program.

Pyongyang also test-fired a missile over Japan on Aug. 29 and two intercontinental ballistic missiles into the sea off its eastern coast in July.

Rep. Dana Rohrabacher, R-Calif., said the U.S. should intercept such missile tests as a show of force.

“I would hope that we shoot it down as a message to the North Koreans and to other people, like in Japan, who are counting on us,” he said Tuesday during a House Foreign Affairs Committee hearing. “Unless we demonstrate we’re willing to use force, there’s no reason for them to believe we will.”

U.S. and Japanese officials said they could have targeted the missile but did not make the effort because it was not aimed at land.

Japanese Prime Minister Shinzo Abe said his government “had a complete grasp of the missile’s movement from the moment it was launched and was ready for all possible measures.” But Japanese officials said no debris or damages were reported and the country’s Self-Defense Forces did not take measures to shoot it down.

The New York Times reported that the Trump administration had seen the missile being fueled up a day before Friday’s launch but decided not to take it out on the launching pad. Pence was shown images of the missile during a visit to an intelligence agency, the Times reported, citing anonymous officials.

Pentagon spokesman Col. Rob Manning told reporters Friday that if the IRBM had been a direct threat to U.S. territory or its allies, “we would have taken appropriate action.”

Seoul also was ready for it and conducted its own missile test nearly simultaneously on Friday morning, firing from its Hyunmoo-2 system into the sea off the peninsula’s east coast.

The U.S. has missile-defense capabilities in the region, including Terminal High Altitude Area Defense systems on Guam and in South Korea as well as Patriot missiles. It also has sea-based platforms, including Aegis-equipped destroyers and an integrated air-defense network.

South Korea and Japan also have the ability to defend against the North’s growing arsenal.

But analysts pointed out that an attempt to use the systems against a North Korean missile test in the absence of a real threat would be risky and expensive.

Jeung Young-tae, director of military studies at Dongyang University in South Korea, said a missile fired at U.S., Japanese or South Korean territory would likely trigger military action but the North Koreans have so far been careful to avoid posing a direct threat.

“It’s just a test so it’s not worth it,” Jeung said in a telephone interview. “You don’t really want to hit them because it could cause things to escalate into conflict.”

Michael Auslin, an Asia expert at Stanford University’s Hoover Institution, also said the use of missile-defense systems could also expose any weaknesses since they may fail.

“It’s a big gamble to decide whether or not to do this,” he told NPR. “If we fail, then it would reveal the hollowness of the missile-defense policy that we have.”