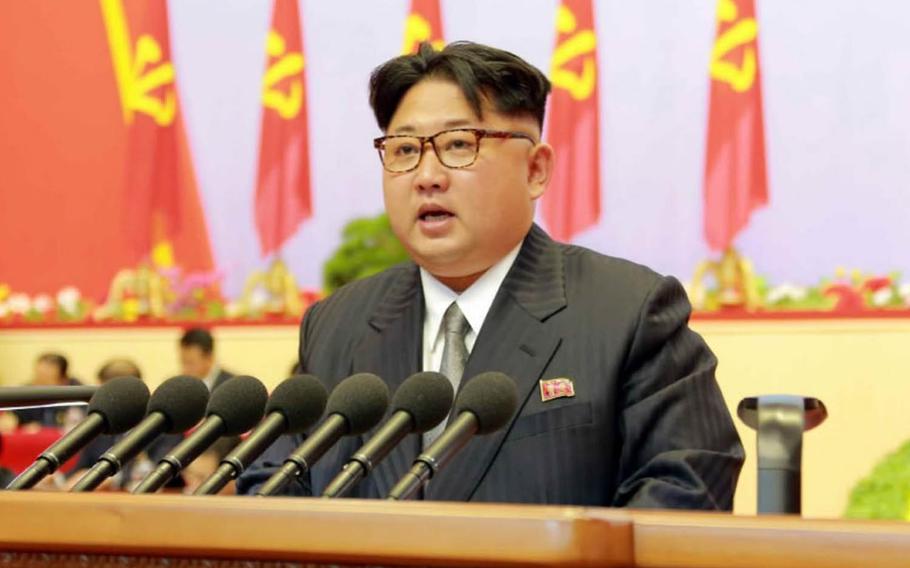 North Korean leader Kim Jong Un addresses the Workers' Party Congress over the weekend in Pyongyang. North Korea promised to strive for a more prosperous and modern economy but warned it won't back down from its nuclear weapons program as the landmark ruling party congress entered its fourth day Monday, May 9, 2016. (Courtesy of KCNA)

SEOUL, South Korea — North Korea promised to strive for a more prosperous and modern economy but warned it won’t back down from its nuclear weapons program as a landmark ruling party congress entered its fourth day Monday.

Ruler Kim Jong Un also said his regime wants better relations with nations that have been “hostile,” a possible nod to the U.S., and proposed military talks with South Korea to ease tensions on the world’s most heavily fortified border.

Analysts said the young leader is moving to take advantage of new confidence in his country’s weapons program after staging a fourth nuclear test in January.

“They have an atomic bomb right now. Now they want to show they’re also open for dialogue,” said Joon Hyung-kim, a professor at South Korea’s Handong Global University. “I think North Korea believes they have the key in this situation. They think that time is on their side.”

The Workers’ Party Congress — the first since 1980 when North Korea’s founding father, Kim Il Sung, was still in charge — happened against the backdrop of rising international tensions following January’s underground explosion as well as a long-range rocket launch and a series of other missile tests despite harsh U.N. sanctions.

While the country briefly opened its doors to foreign media for the congress, it clearly is concerned about anything that it considers unflattering. The British Broadcasting Corp. said its correspondent and his producer and cameraman had been detained and were being expelled because of their reporting.

In a three-hour speech this weekend, Kim insisted his country was a responsible nuclear power that will “work to realize the denuclearization of the world.” He praised recent nuclear achievements saying the weapons were a deterrent to an invasion but that his country won’t fire the first shot, despite recent threats to turn Seoul and U.S. cities into “seas of fire.”

Kim also stressed the North’s long-stated desire for talks and reunification with South Korea under a federal system. South Korea dismissed the overture, calling it “propaganda.” Talks can only be held “when North Korea stops provocations and shows its sincere will to denuclearize,” Unification Ministry spokesman Jeong Joon-hee told a news conference Monday.

The congress adopted a resolution Sunday that warned “if the South Korean authorities opt for a war … we will turn out in the just war to mercilessly wipe out the anti-reunification forces and achieve the historic cause of national reunification,” according to the state-run Korean Central News Agency.

Kim, wearing a Western suit and tie, also unveiled a five-year economic plan — the first since his grandfather, Kim Il Sung, was in charge. He provided few details other than saying the country should become a “scientific and technological, economic and highly civilized power.”

The speech suggested the 33-year-old leader is taking the lead from his grandfather by taking new ownership of the economy, which his father, Kim Jong Il, largely neglected in favor of the military.

After decades of suffering after the collapse of its sponsor, the Soviet Union, and a deadly famine, North Korea has seen some economic growth under the latest Kim, mainly in the capital Pyongyang, which is home to the country’s elite. But malnutrition remains a major problem.

The country recently warned that an “arduous journey” lies ahead that will include food shortages, which hit hard in the mid-1990s, the last time China went along with sanctions.

In a report last month, the U.N.’s Food and Agriculture Organization estimated that food production in North Korea had fallen last year for the first time since 2010, largely because of a drought.

“The country’s food security situation is expected to deteriorate from the previous year when most households were already estimated to have poor or borderline food consumption levels,” it said.

Kim said the country needs to increase its international trade and participation in the global economy, but he didn’t announce major reforms. The fresh U.N. sanctions, dubbed the toughest in 20 years, are largely aimed at hitting the economy, particularly anything that can help further the weapons and missile programs.

“There’s a desperation about the sanctions. They’re really worried that they’re going to hurt,” said David Garretson, an international relations expert at the University of Maryland’s University College. “Even if they don’t get the Americans to cut a deal, they’ve got their attention.”

More than 100 foreign reporters were allowed into North Korea for the congress, but they were not given access to the convention hall where Kim addressed more than 3,000 delegates.

The BBC said its correspondent Rupert Wingfield-Hayes along with a producer, Maria Byrne, and cameraman Matthew Goddard, were detained and questioned before being taken to the airport. The team had traveled to North Korea before the congress along with a delegation of Nobel laureates on a research trip.