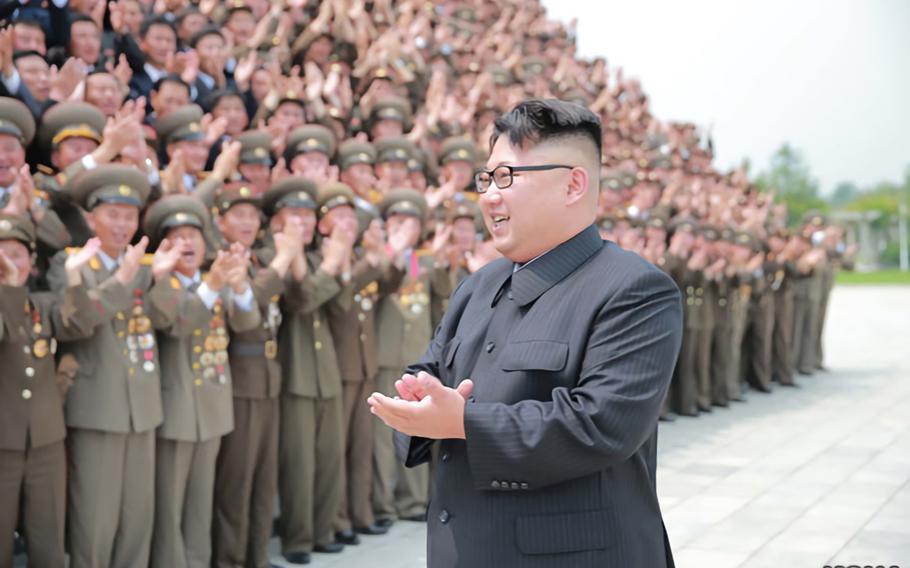 The Musudan missile reportedly flew about 250 miles and reached an altitude of between 620 and 880 miles after it was fired over the Sea of Japan, raising concern that Pyongyang is making progress toward its stated goal of developing a nuclear weapon that can reach the U.S. mainland. Five previous efforts to launch the mid-range missile had failed.

The North Korean leader held a photo session with those behind the June 22 launch, which was an important step in increasing the country’s defense capabilities, according to the state-run Korean Central News Agency.

Published photos show Kim smiling and waving to hundreds of people, including several military leaders, lined up on steps below the portraits of previous rulers Kim Il Sung and Kim Jong Il — his grandfather and father.

“He expressed expectation and belief that the scientists, technicians, workers and officials in the sector of national defense science would perform fresh miracles and innovations in their scientific research for national defense and munitions production,” KCNA reported. It did not give a date for the session.

As the North remains defiant in pursuing its weapons programs, the U.S., Japan and South Korea conducted their first joint anti-missile exercise in Hawaii this week. The so-called Pacific Dragon drill was based on a hypothetical missile launch by North Korea.

North Korea on Tuesday called the exercise a “military provocation” that provides another reason for it to continue to develop its ability to stage a “pre-emptive nuclear attack.”

“The drill staged in the Pacific Ocean was another military provocation against the DPRK,” KCNA quoted a spokesman for the Foreign Ministry’s Disarmament and Peace Institute as saying in a separate report. DPRK is the acronym for the North’s official name, the Democratic People’s Republic of Korea.

The young Kim has been seeking to bolster his authority and the personality cult that has kept his family in power for three generations. He has vowed more missile tests despite a new round of harsh U.N. sanctions imposed after the North staged its fourth underground nuclear test in January.

He also announced a five-year economic plan at last month’s ruling Workers’ Party Congress, the first in 36 years. Observers were watching North Korea’s parliament, which was due to convene on Wednesday, for more details.