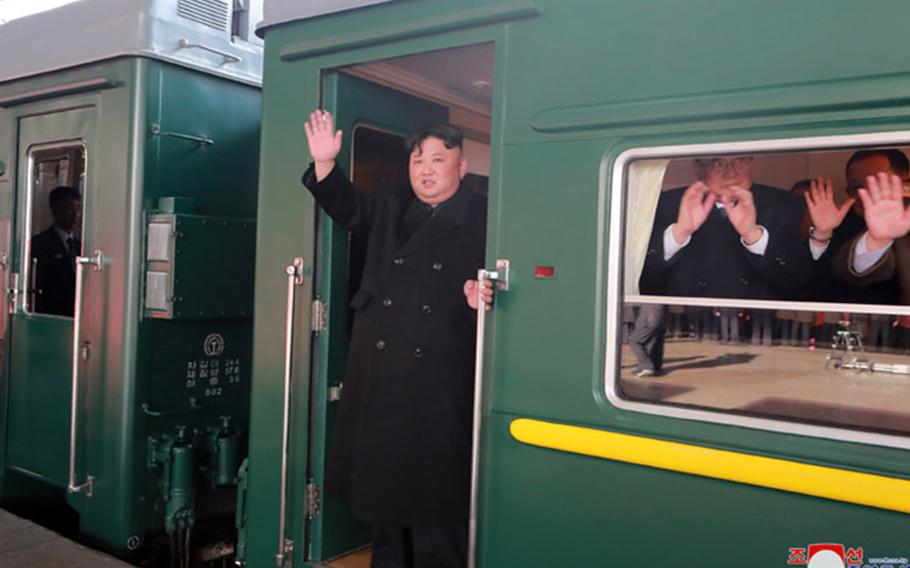 Flags of North Korea (left), Vietnam (center) and the United States (right) are hung throughout Hanoi as the capital prepares for the summit between President Donald Trump and Kim Jong Un. (Kim Gamel/Stars and Stripes) HANOI, Vietnam — As the train carrying North Korea’s leader snaked toward Vietnam, President Donald Trump said Monday that Kim Jong Un will make a “wise decision” ahead of the second summit between the two men in less than a year.

The White House signaled expectations were low for a breakthrough in nuclear talks with the North as Trump faced pressure to come away from the two-day meeting with concrete commitments from Kim to “denuclearize,” a term that means different things to each party.

Trump and Kim met June 12 in Singapore in an unprecedented meeting between sitting leaders of the two longtime adversaries. The result was a vague commitment to the “complete denuclearization of the Korean Peninsula,” but lower-level talks on how to accomplish that have faltered.

The two unpredictable leaders have placed great importance on their relationship, even as the North has shown no signs of moving to dismantle its nuclear weapons program.

“With complete Denuclearization, North Korea will rapidly become an Economic Powerhouse,” Trump tweeted hours before he was to board Air Force One. “Without it, just more of the same. Chairman Kim will make a wise decision!”

But he kept the world guessing about what he might offer in return, a key sticking point, as Kim’s regime wants a reciprocal approach in which it is rewarded for steps already taken.

The North Korean leader has offered to destroy the main nuclear production complex at Yongbyon if the U.S. offers corresponding measures.

The Trump administration insists it will maintain punishing economic sanctions against the North until the “final fully verified denuclearization.”

Experts predicted the president could ease pressure by allowing more exemptions for inter-Korean and humanitarian projects. He also might announce a further suspension of annual war games with South Korea, as he did after the previous summit.

The next joint military exercises widely are expected to begin next Monday on a smaller scale, but officials have declined to confirm that until after the summit.

North Korea hates the drills, which it considers rehearsals for an invasion.

At the same time, influential voices in Washington have expressed doubt that the North will relinquish its nuclear capability entirely and have urged the White House to be careful not to make concessions based simply on promises from Kim.

“We currently assess that North Korea will seek to retain its WMD capabilities, and is unlikely to completely give up its nuclear weapons and production capabilities,” Director of National Intelligence Dan Coats told a Senate committee last month. “Our assessment is bolstered by our observations of some activity that is inconsistent with full denuclearization,”

South Korean President Moon Jae-in, who is desperate to prevent a return to the tensions that preceded the talks, expressed hope the summit would be a success.

“The two leaders of North Korea and the United States have traveled to this point on a path that no one else has taken before,” Moon said Monday in Seoul.

He added that a successful summit would “serve as a decisive opportunity to resolve the threat of war and other security concerns on the Korean Peninsula as well as to enable us to move toward the age of a peace-driven economy.”

His office, meanwhile, said a declaration to formally end the 1950-53 Korean War, which was left in a stalemate with an armistice, could be on the table.

“I believe the possibility is open,” presidential spokesman Kim Eui-kyeom said. “There is no way of knowing what kind of a declaration it might be, but I believe the United States and North Korea may reach an agreement on the declaration of war’s end, at any degree.”

North Korea has long sought such a move, which would be the first step toward a formal peace treaty. But the U.S. has resisted over concerns it might undercut the justification for maintaining some 28,000 American troops on the divided peninsula.

Vietnam, which has been touted as an example of a communist country that has successfully implemented economic reforms, said it was ready to host the two leaders. But, it said, the rest would be up to them.

“Security will be at the maximum level,” Le Hoai Trung, Vietnam’s deputy minister of foreign affairs, told reporters in Hanoi.

The Vietnamese said Trump would meet with the country’s leadership on Wednesday morning, leading to speculation he would begin his summit with Kim in the afternoon.

The North Korean leader left Pyongyang Saturday en route to Vietnam, according to the state-run Korean Central News Agency. It published a photo of Kim waving as he boarded his specially outfitted green train.

KCNA didn’t give more details about the route, but Vietnam said Kim was expected to arrive via China by train at the border station of Dong Dang early Tuesday.

South Korea’s Yonhap News Agency reported that Kim was likely to travel by car to Hanoi. The North Korean leader flew on a Chinese plane to Singapore for the previous summit.