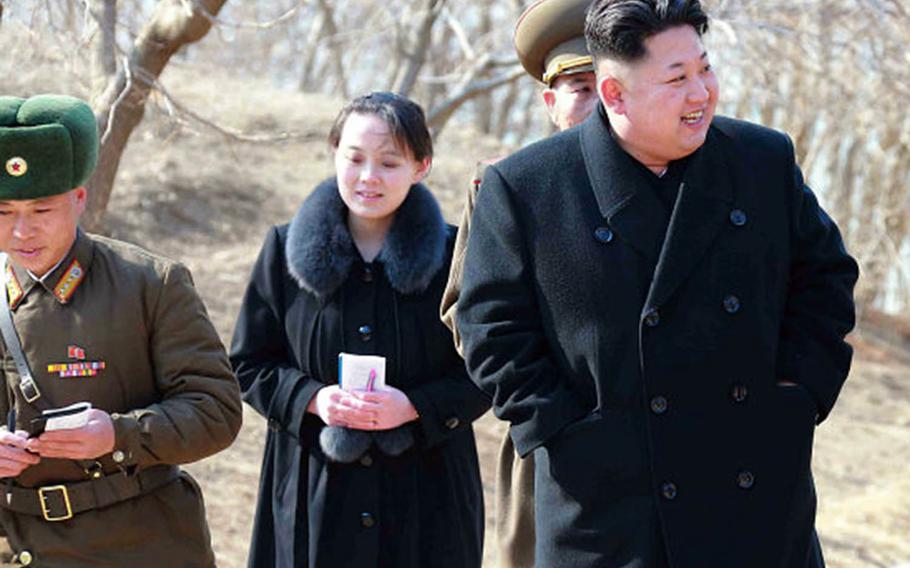 This undated photo from the Korean Central News Agency shows North Korean leader Kim Jong Un and his sister, Kim Yo Jong, who runs the Workers' Party propaganda and agitation department and has been targeted by unilateral U.S. Treasury Department sanctions. (Courtesy of KCNA)

SEOUL, South Korea — North Korean leader Kim Jong Un is planning to send his sister as part of a high-level delegation to the Olympics on Friday, which would make her the first member of the ruling family to visit the South since the 1950-53 Korean War. The decision, which was complicated by the fact that she has been blacklisted by the United States, came as Vice President Mike Pence announced plans to unveil the “toughest and most aggressive” sanctions against the North in coming days. The North informed South Korea that Kim Yo Jong, who was promoted to a powerful post within the country’s ruling party last year, would accompany the ceremonial head of state Kim Yong Nam to the games, the Unification Ministry said Wednesday. It’s the latest in a series of surprising moves set in motion when Kim Jong Un announced in his New Year’s address that the North may participate in the Olympics, which begin Friday in the resort town of Pyeongchang on the divided peninsula.

The news immediately drew comparisons with President Donald Trump’s daughter Ivanka, who also will be at the Olympics.

“Ivanka/Yo-Jong sideline. Let’s do this!” John Delury, a Seoul-based expert on North Korea, said in a tweet.

South Korea’s presidential office welcomed the decision to send Kim’s sister and other high-level officials, which adds to its hopes that the international competition will be a springboard to broader dialogue over the North’s nuclear weapons program. “We believe that sending these delegates shows North Korea’s will to ease tensions on the Korean peninsula and to celebrate the Winter Olympic games,” spokesman Kim Eui-kyeom told reporters. But the situation threatened to cause a new rift with the United States, which added the 28-year-old Kim Yo Jong — who runs the Workers’ Party propaganda and agitation department — to Treasury Department sanctions last year aimed at punishing the North for human rights abuses and censorship. Choe Hwi, another delegate on the list sent Wednesday by the North Koreans, faces U.N. Security Council sanctions, including a travel ban. They were imposed as part of efforts to punish the regime for its banned nuclear weapons program. The delegation also includes Ri Son Gwon, the head of the state agency in charge of inter-Korean affairs, as the third ranking member, the ministry said. Government officials said they were consulting with the United States and the Security Council to make sure there were no sanctions-related problems. The Yonhap News Agency quoted one source as saying there was time to make a decision since the delegation isn’t due to arrive until Friday. The U.S. Embassy in Seoul said Washington is aware of the North Korean decision, but it had nothing to share at this point. The U.S. had no immediate comment. North Korea has 22 athletes competing in the Olympics along with performing artists and cheerleaders. The arrangements already have required complicated discussions on everything from whether the North Koreans should get to keep hockey sticks, pricey smartphones and American uniforms like the other competitors. They can’t.

South Korean President Moon Jae-in has expressed hope that North Korea’s peaceful participation in the Olympics will extend to talks after the games with the United States and other allies after months of missile and nuclear tests that prompted fears of a new conflict. Critics say the North is hoping to use the international spotlight on the games to boost its image and reverse the recent wave of diplomatic isolation and punishing economic sanctions that experts believe are beginning to bite.

President Donald Trump, who has traded personal insults and threats with the North Korean leader, has welcomed the Olympics participation but vowed to maintain his maximum pressure campaign of isolating the regime.

Pence, who will travel to South Korea on Thursday to lead the U.S. delegation to the Olympics, said the United States is preparing to announce even tougher sanctions in coming days. “The United States of America will soon unveil the toughest and most aggressive round of economic sanctions on North Korea ever – and we will continue to isolate North Korea until it abandons it nuclear and ballistic missile programs once and for all,” he said during a stopover in Japan. The two Koreas remain technically at war after the 1950-53 conflict ended in an armistice instead of a peace treaty. The United States, which backed the South in the war, maintains about 28,500 servicemembers on the peninsula. Washington agreed to delay annual war games with the South until after the Olympics and subsequent Paralympics in a nod to the North, which considers the military exercises a rehearsal for an invasion.