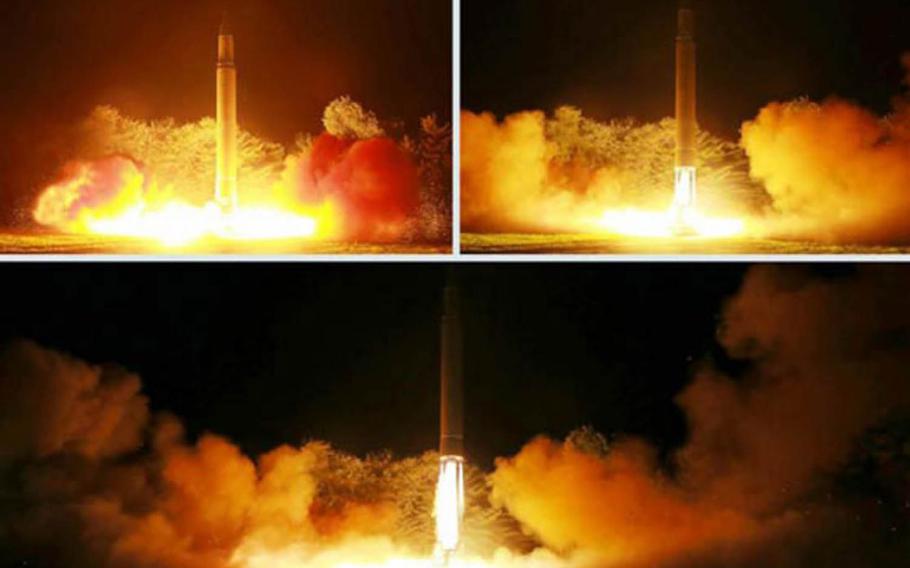 These undated images published in the July 31, 2017, edition of North Korea's Rodong Sinmun newspaper purport to show the launch of an intercontinental ballistic missile late Friday. (Courtesy of Rodong Sinmun)

President Donald Trump and Japanese Prime Minister Shinzo Abe agreed Monday to get tougher on North Korea, while the regime warned it will retaliate if Washington pursues “military action and ‘tough sanctions.’”

Trump, who spoke to Abe via telephone, promised to “take all necessary measures to protect” Japan after the North test-fired its second intercontinental ballistic missile late Friday, Abe told reporters, according to The Associated Press. Abe also said Japan would bolster its defense systems and capabilities in solidarity with the United States.

The pair plan to push for tougher sanctions and urge China to put pressure on the North, according to South Korea’s Yonhap News Agency.

North Korean leader Kim Jong Un expressed “great satisfaction” with the missile, which splashed down into the Sea of Japan near Hokkaido, said a statement released Saturday by the Korean Central News Agency. Kim boasted that the launch proved the North’s missiles now have the ability to reach “all across the continental U.S.”

North Korea’s Foreign Ministry later warned the U.S. against responding with additional sanctions or military action, according to a statement released by KCNA.

“In case the U.S. fails to come to its own senses and continues to resort to military adventure and ‘tough sanctions,’ [North Korea] will respond with its resolute act of justice as already declared,” the statement said.

On Sunday, U.S. Ambassador to the United Nations Nikki Haley tweeted that she was “done talking” about North Korea, and later released a statement saying there was “no point” of seeking an emergency Security Council session over the matter.

“North Korea is already subject to numerous Security Council resolutions that they violate with impunity and that are not complied with by all UN Member States,” she said.

An addition Security Council resolution would be “of no value” because it sends a message to Kim that the international community isn’t willing to seriously challenge him, Haley said.

“China must decide whether it is willing to take this vital step,” she said. “The time for talk is over. The danger the North Korean regime poses to international peace is now clear to all.”