N. Korea says South shot at ‘flock of birds,’ not drone or balloon 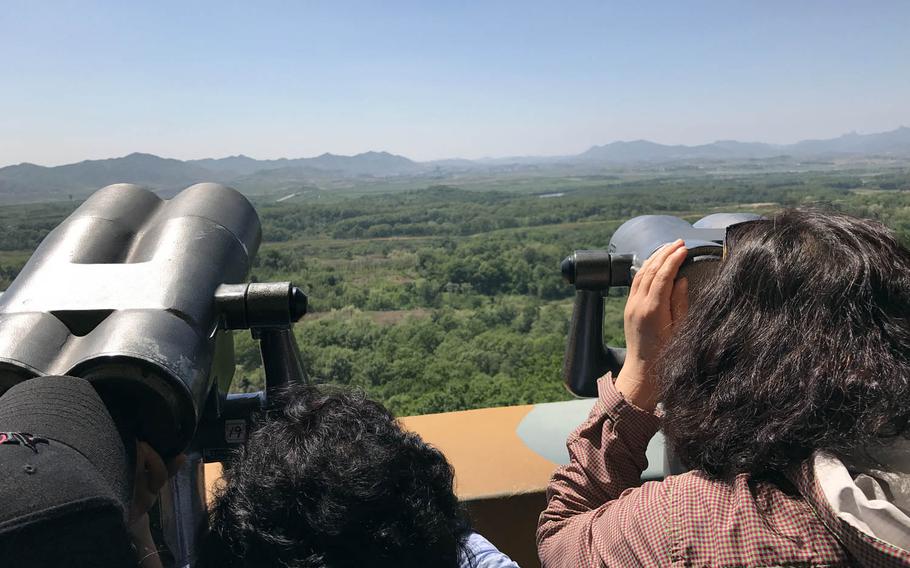 Buy Photo
Tourists look at North Korea from a viewing platform in South Korea near the Demilitarized Zone, Wednesday, May 24, 2017. (Aaron Kidd/Stars and Stripes)

SEOUL, South Korea — North Korea added a new twist to the strange saga of a flying object that crossed into South Korean airspace earlier this week, saying the rival military had opened fire on a “flock of birds.”

South Korea’s military bolstered air surveillance and broadcast a warning to North Korea via loudspeakers Tuesday after an unidentified object flew across the border, known as the Demilitarized Zone. It then fired warning shots.

The Yonhap news agency and other local media speculated the object may have been a drone. South Korea’s military fired warning shots after a North Korean drone briefly crossed the border last year.

But the Ministry of National Defense said Wednesday that analysis of information from radar and observation equipment suggested the object was most likely a balloon carrying propaganda leaflets from the North.

Pyongyang denied that in a statement carried on the state-run news agency Thursday, saying it was a flock of birds.

The Korean Central News Agency, citing a spokesman for the army’s general staff, said the South Koreans had fired more than 450 machine gun rounds at “a flock of birds flying in the sky” in the border area of Kangwon province.

“The recent military provocation is a stopgap measure to check the war-weariness sweeping the puppet army in the face of [North Korea’s] rapidly developing nuclear and ballistic rocket technology,” it added.

An official with South Korea’s Ministry of National Defense declined to comment on the claim about the birds. But he said the military had confirmed more than 10 balloons flew across the border on Tuesday and many propaganda leaflets had been collected.

“Our military is maintaining firm readiness posture and has been and will be monitoring the front lines around the DMZ consistently,” the official said, speaking on condition of anonymity.

The incident illustrates the extreme sensitivities and risks of miscalculation in the decades-old standoff between the two countries, which have been divided by the world’s most fortified border since the 1950-53 Korean War ended in an armistice instead of a peace treaty.

Both sides frequently try to flood each other propaganda, and tensions have risen as North Korea makes progress in developing nuclear weapons despite U.N. sanctions and international pressure to stop.

Soldiers also exchanged machine gun and rifle fire after South Korean activists sent balloons carrying propaganda against the regime across the border in 2014, according to The Associated Press.