N. Korea closing communication channel with US over THAAD 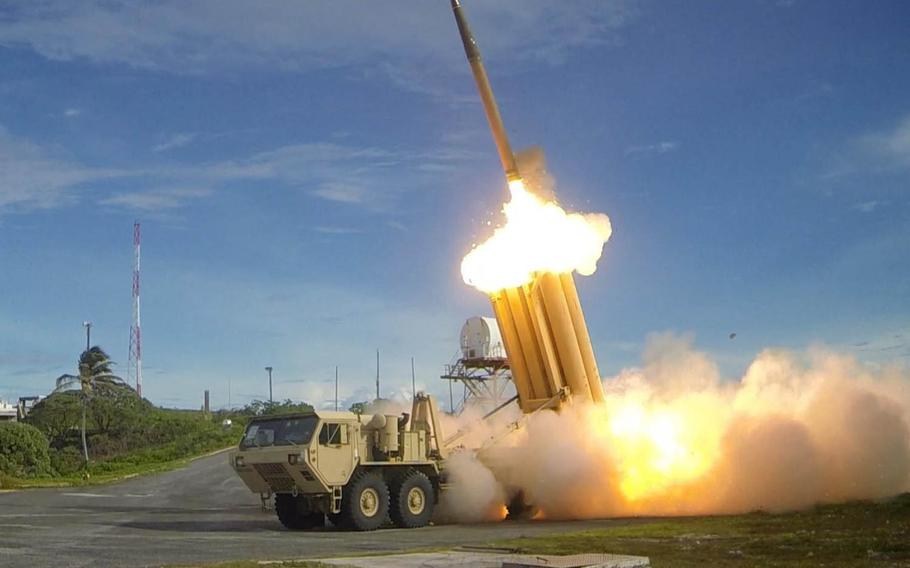 The first of two Terminal High Altitude Area Defense, or THAAD, interceptors is launched during a successful intercept test in 2013. North Korea on Monday threatened to take a "physical counter-action" if the United States follows through with plans to deploy the advanced missile defense system on the peninsula. (Ralph Scott/Missile Defense Agency)

SEOUL, South Korea — North Korea said Monday that it will close its communication channel with the United States and suggested it will treat detained Americans more harshly to protest new sanctions against leader Kim Jong Un.

The report on the state-run Korean Central News Agency came hours after Pyongyang threatened to retaliate with a “physical counter-action” if the U.S. and South Korea deploy an advanced missile defense system on the divided peninsula.

The North stepped up its rhetoric after Washington slapped sanctions on Kim and other top officials over human rights violations on Wednesday.

North Korea already faced U.N. sanctions over its nuclear weapons program, but it was the first time the country’s leader was personally sanctioned. Pyongyang called the action an “open declaration of war.”

KCNA said the North also notified the U.S. government on Sunday that it will close its New York diplomatic channel as part of "practical" measures taken in response to the sanctions. The U.S. and North Korea do not have diplomatic relations, but the North’s mission to the United Nations has been used as a communication conduit, according to South Korea’s Yonhap news agency.

North Korea also said it will handle Americans detained in the isolated country with martial law, a statement that could complicate efforts to free the men.

Two American citizens who are known to be in custody in the North — Kim Dong-chul and Otto Warmbier — have been sentenced to years of hard labor for alleged espionage and other so-called subversive acts.

Tensions escalated further with Friday’s announcement that Washington and Seoul have agreed to establish a Terminal High-Altitude Area Defense system, known as THAAD, on the peninsula to guard against missiles being developed by the North.

North Korea vowed to “take a physical counter-action to thoroughly control THAAD, aggression means of the U.S. for world domination, from the moment its location and place have been confirmed in South Korea,” KCNA said in an earlier report that cited the army’s Artillery Bureau of the General Staff.

It also criticized South Korea for allowing the system to be deployed on its territory. The two countries are technically still at war after the 1950-53 conflict ended in an armistice instead of a peace treaty. About 28,500 U.S. servicemembers are stationed in the South.

“We once again warn the enemies that it is the steadfast will of the KPA to make merciless retaliatory strikes to reduce South Korea to a sea in flames, debris once an order is issued,” the report said.

South Korea’s Ministry of Defense said it was ready to respond in kind.

“North Korea needs to clearly see who is responsible for putting the Korean Peninsula’s peace and security at risk before criticizing the THAAD deployment decision,” ministry spokesman Moon Sang-gyun said in a press briefing.

“If North Korea continues its groundless claims and rash actions in defiance of our warnings, it will have to face our military’s stringent retaliation,” he added.

China, a traditional Pyongyang ally, also has strongly objected to the decision to deploy THAAD on the peninsula. Beijing fears the radar system could be used to track its military movements.

South Korean President Park Geun-hye insisted it is a “purely defensive" measure, according to Yonhap.

“THAAD will not target any country other than North Korea and will not encroach upon the security interests of any third country. We have no reason to do so,” she was quoted as saying Monday during a meeting with her senior secretaries.

It fired a missile from a submarine on Saturday, although South Korean officials said it failed in the early stages of flight. That was the latest in a series of missile launches as tensions have risen after the North staged its fourth underground atomic test in January.