N. Korea calls US bomber flyover of the South a bluff 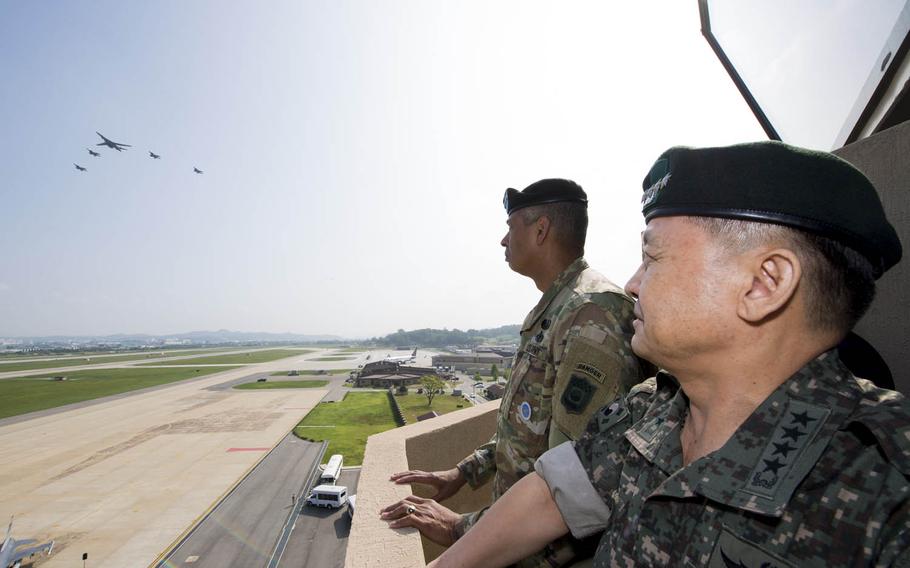 SEOUL, South Korea — North Korea claims the deployment of two U.S. supersonic bombers over the peninsula was a bluff, warning that such actions were escalating tensions “to the point of explosion.”

The powerful B-1B Lancers, flanked by U.S. and South Korean fighter jets, flew over Osan Air Base south of Seoul on Tuesday in a show of force and solidarity with Seoul four days after the North conducted its fifth and most powerful nuclear test.

Gen. Vincent Brooks, commander of U.S. Forces Korea and the combined forces, called the test an “unacceptable threat” and said the bombers were just one example of the “deep arsenal” available to defend the peninsula.

North Korea said Wednesday the flyover was the latest example of what it calls imperialist plans for a pre-emptive attack. It also pointed to the latest round of annual U.S.-South Korean war games, which it considers a rehearsal for an invasion.

“They are bluffing that B-1Bs are enough for fighting an all-out nuclear war,” it said in a statement carried on the state-run news agency. “These extremely reckless provocations of the U.S. imperialist warmongers are pushing the situation on the Korean peninsula to the point of explosion hour by hour.”

The B-1B was originally designed for nuclear capabilities but switched to an exclusively conventional combat role in the mid-1990s, according to Boeing’s website.

The Korean Central News Agency report also warned that North Korea’s army has “all means for military counteraction to beat back any aggression and provocation at a single blow.”

North Korea frequently responds to U.S.-South Korean actions with bellicose statements that can border on comical. But the situation on the peninsula, which is divided by the world’s most militarized border, has grown increasingly tense since a crisis erupted after the previous nuclear test in January.

Friday’s underground blast was recorded as magnitude-5.3 and had the explosive power of at least 10 kilotons, far larger than previous blasts, according to preliminary findings.

North Korea also said it has the ability to produce nuclear warheads in significant numbers and mount them on strategic ballistic missiles.

Experts believe Pyongyang is years away from being able to effectively deploy a nuclear-tipped intercontinental missile that could reach the continental U.S.

But nuclear researcher Siegfried Hecker, who has visited North Korea’s nuclear facilities in the past, wrote on the 38 North website that the communist state may have sufficient fissile material to have about 20 bombs by the end of this year and add seven more per year. He also said the North appears to have nuclear warheads that can be mounted on some short-range and possibly medium-range missiles.

The U.N. Security Council, which tightened sanctions in March, has vowed to try to close loopholes and implement even stricter measures in response to the latest test.

But diplomatic pressure has so far failed to halt the North’s provocations. Instead, the regime has stepped up the pace of missile tests in recent months with increasing success, apparently learning from its failures.

The U.S. has about 28,500 servicemembers stationed in South Korea. The divided peninsula remains technically at war after the 1950-53 conflict ended with an armistice instead of a peace treaty.