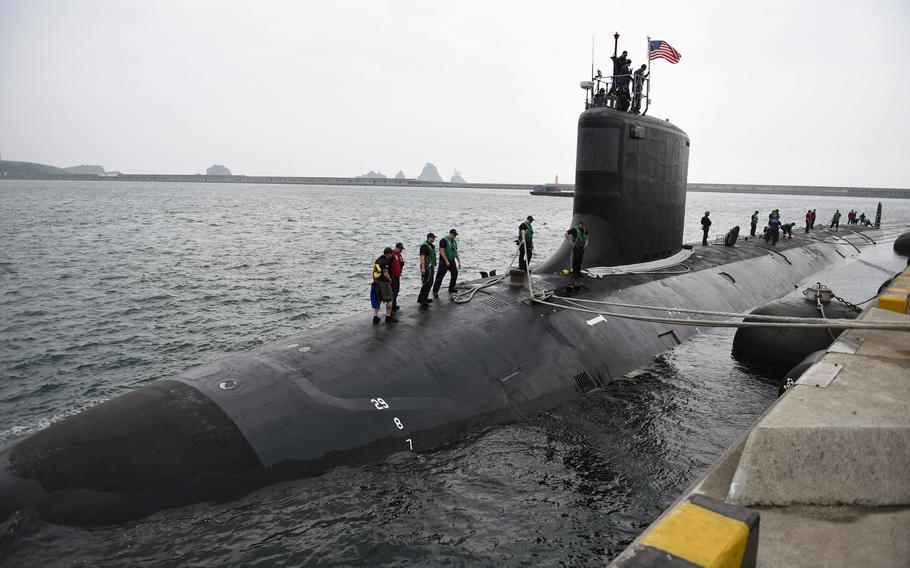 The Virginia-class fast-attack submarine USS Mississippi arrives at the Republic of Korea Fleet base in Busan on Monday, June 13, 2016, as part of a routine port visit. North Korea called the visit a direct threat and said it would bolster its nuclear capabilities in self-defense. (Jermaine M. Ralliford/U.S. Navy)

SEOUL — North Korea called the arrival of the nuclear-powered submarine USS Mississippi in a southern South Korean port a direct threat and said it would bolster its nuclear capabilities in self-defense.

The Virginia-class attack submarine arrived at Busan earlier this week as part of its maiden deployment to Asia. The Navy called the visit a routine port visit that would allow the sub’s approximately 141 sailors a chance to contact loved ones at home and visit Korea after several weeks at sea.

But North Korea’s Foreign Ministry said the Mississippi’s arrival was a “direct threat to the security of the DPRK and peace of the region,” according to a report by the state-run Korean Central News Agency on Thursday. DPRK is the acronym for the North’s official name, the Democratic People’s Republic of Korea.

It accused the U.S. of a “ceaseless introduction of strategic assets of various kinds to and around the Korean peninsula” and “making the already unstable situation all the more uncontrollable.”

The ministry said the best way to avert a war “is to bolster the DPRK’s nuclear deterrence for self-defense in every way.”

North Korea has stepped up its bellicose rhetoric as tensions have risen on the divided peninsula since Pyongyang staged its fourth nuclear test in January. Leader Kim Jong Un has vowed to continue his atomic weapons program despite tough U.N. sanctions and international condemnation.

A spokesman for U.S. Naval Forces Korea said that such port visits are planned months in advance. “It is a regular scheduled port visit, and it is part of a routine deployment,” Lt. j.g. Joshua Kelsey said in a telephone interview.

The Pearl Harbor-based Mississippi, one of the most advanced submarines in the world, is equipped with torpedoes and Tomahawk cruise missiles. Commissioned in 2012, it’s more than 360-feet-long and displaces about 7,000 tons.

The Korean peninsula technically remains at war after the 1950-53 conflict ended in an armistice instead of a peace treaty. About 28,000 U.S. servicemembers are stationed in South Korea.