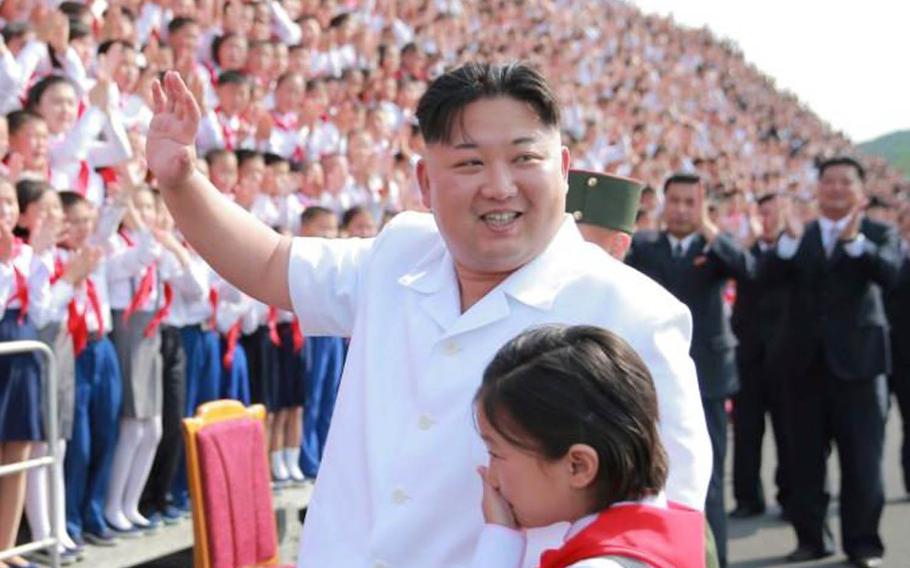 In this undated image from the Korean Central News Agency, North Korean leader Kim Jong Un arrives to attend "We Are the Happiest in the World," a performance by schoolchildren to celebrate the 70th anniversary of the Korean Children's Union. (Courtesy of KCNA)

South Korean spy drones flew along the maritime boundary in the Yellow Sea and crossed the “northern limit line” three times at a distance up to six miles on Tuesday, the state-run Korean Central News Agency reported.

It also claimed that a navy speedboat and four fishing boats from the South “infiltrated five times into the territorial waters of the DPRK,” on the same day. DPRK is an acronym for the North’s official name, the Democratic People’s Republic of Korea.

“The escalated military provocation is sure to incite a merciless counteraction,” KCNA said.

The South Korean military denied the allegations, saying in an email it “has never sent spy drones and boats over the NLL into NK territory.”

The rival nations, which are divided by the world’s most militarized border, have in the past accused each other of crossing the line. On May 27, the South Korean military said two North Korean boats crossed the line but quickly retreated after warning shots were fired.

North Korea does not generally acknowledge the western sea border, which was established by the U.S.-led United Nations Command after the three-year Korean War ended in 1953 with a truce instead of a peace treaty.

Tensions have been high on the peninsula as Pyongyang persists with its nuclear weapons program despite harsh new U.N. sanctions imposed after it staged a fourth atomic test and a long-range rocket launch earlier this year.

North Korea also is angry that the South rejected a call by leader Kim Jong Un for military talks. Seoul said the offer was insincere as long as the North continues its nuclear ambitions.

The U.N.’s nuclear watchdog said earlier this week that North Korea appears to have reactivated a plant to reprocess spent fuel to produce plutonium, the core material for a nuclear bomb, at the country’s main nuclear facility.

The Yongbyon reactor was closed in 2007 under an aid-for-disarmament deal during six-party talks with the U.S. and other world powers. The negotiations collapsed, and North Korea said last year that the facility was operational again.

The Vienna-based International Atomic Energy Agency has no access to North Korea and relies largely on satellite data for information. Recent images indicated the resumption of activities of the 5-megawatt reactor, the expansion of enrichment facilities and activities related to reprocessing, agency head Yukiya Amano said.

A U.S.-based website that monitors activity in North Korea, 38north.org, has said commercial satellite images taken in May show that North Korea may be preparing or already has started reprocessing spent nuclear fuel to produce plutonium.

KCNA also reported that North Korea’s national parliament would convene on June 29, following up on last month’s seventh Workers’ Party Congress, which was the first in nearly four decades.

The assembly, which includes hundreds of deputies from around the country, is technically the highest organ of government. But in reality it mainly serves to endorse decisions passed down by the party and military leadership.