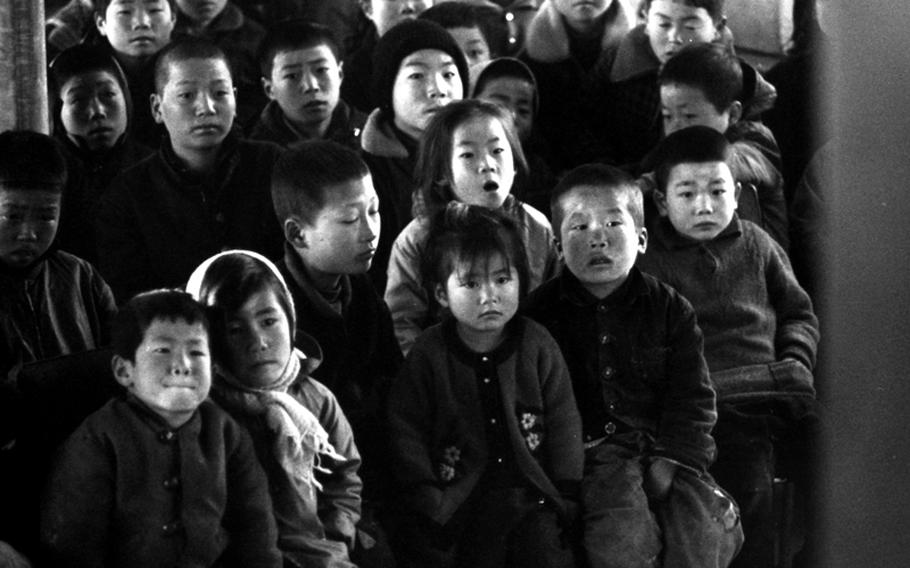 Buy Photo
South Korean children in Tae An Myon Township get a first look at television, thanks to President Lyndon Johnson's donation of a set to the village. (Nick Stavriotis/Stars and Stripes)

Buy Photo
South Korean children in Tae An Myon Township get a first look at television, thanks to President Lyndon Johnson's donation of a set to the village. (Nick Stavriotis/Stars and Stripes) 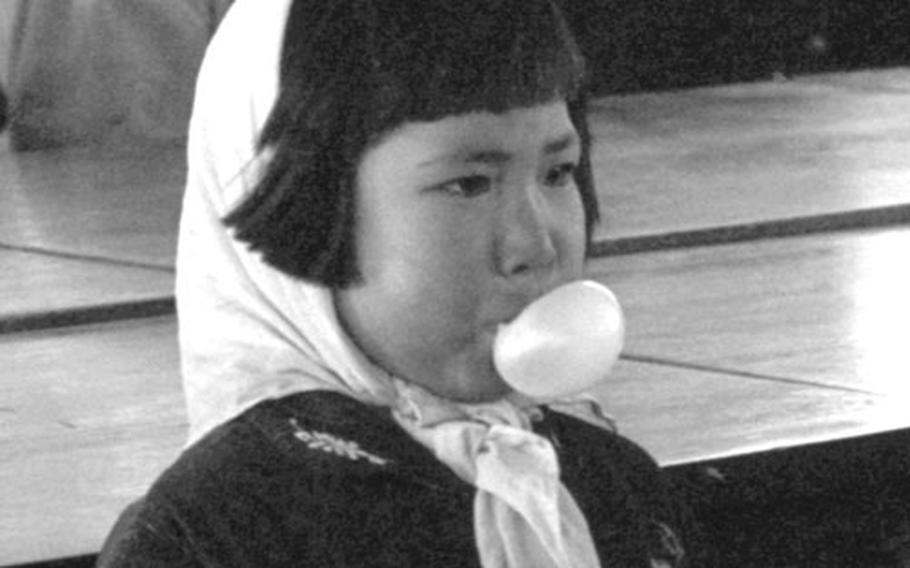 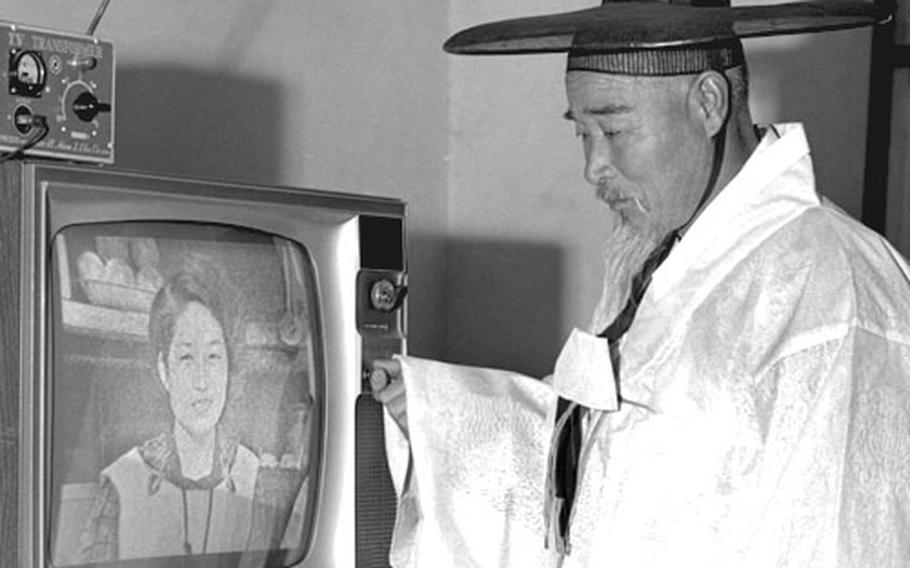 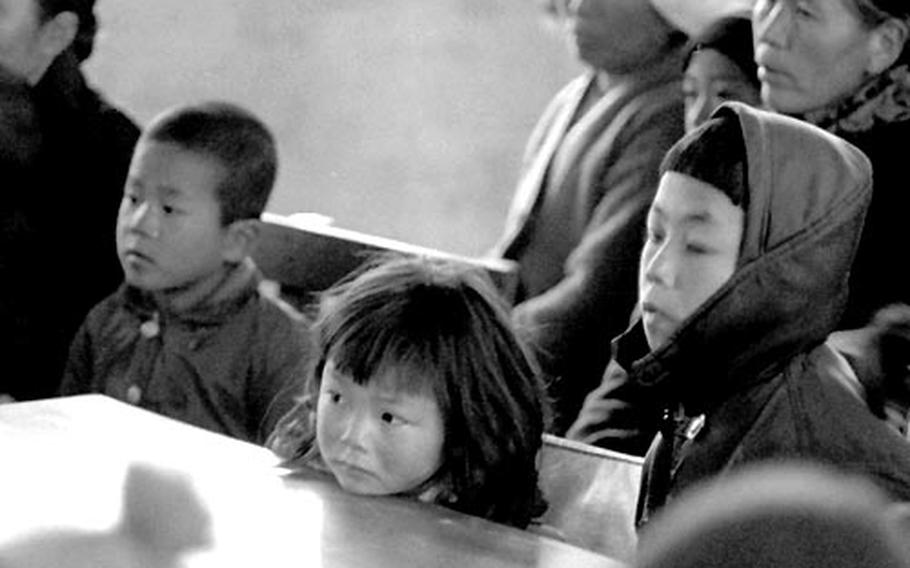 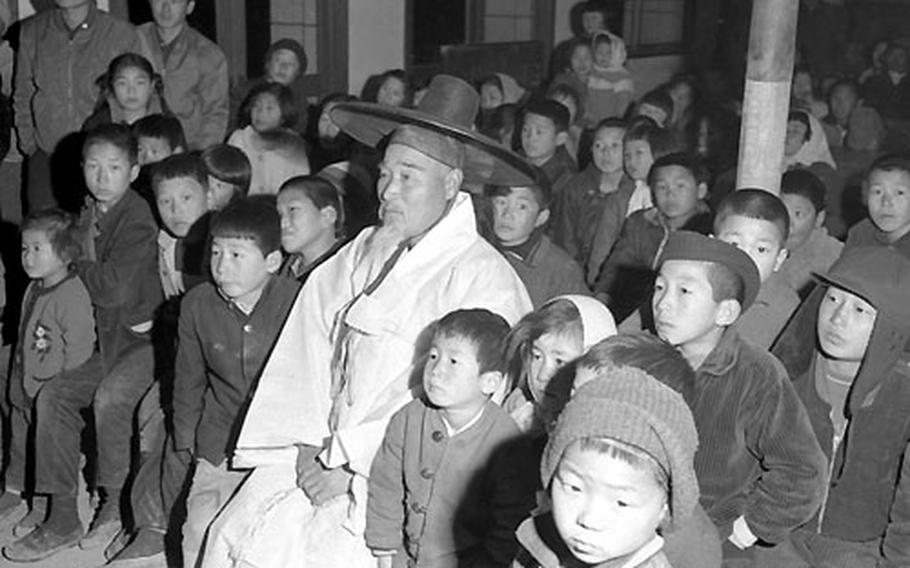 Buy Photo
Choi Si Jong, 67-year-old village elder of Tae An Myon township, is joined by a flock of children as he views the television set given to the village by President Johnson. (Nick Stavriotis/Stars and Stripes)

SUWON, Korea &mdash; "I do not understand it. It is a mysterious thing," said Si Jong Choi, 67-year-old village elder, as he viewed the monstrous box with a strange antenna and wires atop the town hall stage.

The TV set &mdash; a gift from President Johnson &mdash; flickering and speaking in the cold darkness of the town hall, was the first Choi and the villagers of Tae An Myon township had seen.

Now they come by the hundreds, rubbing their hands to keep warm, to be entertained and "mystified," explained County Chief Ik Dong Uhm.

For many of the villagers, including Choi, the television's "mysterious power" holds more interest than the programs it transmits.

"Now everything. is under control," Uhm said.

While the television plays, nobody in the audience talks.

The silence is routinely shattered by the roar of an F-5 Freedom Fighter landing or taking off from nearby Suwon AB, or by the sudden burst of laughter from the children who do not try to understand the "magic screen."

Little brothers hold their little sisters in their laps and grandmothers hold their grandchildren, and each is aware in his own way that the television has brought changes to the traditional pattern of village life.

When an educational program is scheduled, the township is encouraged to watch the television show through the rural wire broadcasting system put in three years ago.

The elder Choi, living in the same village that his family has lived in for the past 500 years, does not understand everything that the Johnson visit brought to the township.

For all the wonder and mystery, Choi thinks it is a good gift. He feels that there are good programs that can help the children and the villagers.

He also likes the boxing and the wrestling, which is a favorite program by unanimous count.

Around 11 p.m., the set is tuned off and the villagers return to their homes.

The television is not left alone.

Lifted off the stage by several farmers, the set is carried to the county guardhouse where a nightly vigil is kept by one of the townsmen to protect it from theft or damage.

The television set has a one-year guarantee.