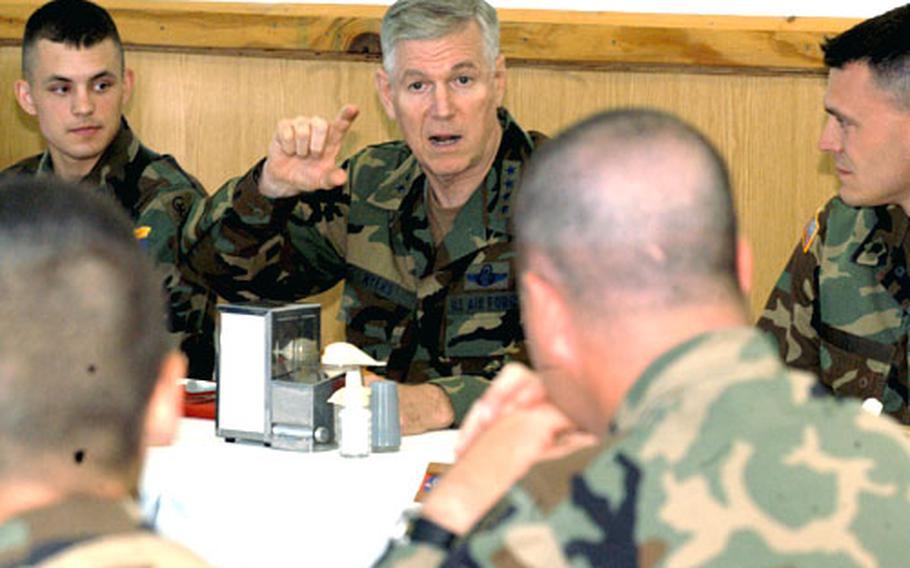 Gen. Richard Myers, chairman of the Joint Chiefs of Staff, talks with U.S. troops at Eagle Base, Bosnia and Herzegovina, over lunch on Tuesday. (Ivana Avramovic / S&S)

Gen. Richard Myers, chairman of the Joint Chiefs of Staff, talks with U.S. troops at Eagle Base, Bosnia and Herzegovina, over lunch on Tuesday. (Ivana Avramovic / S&S) 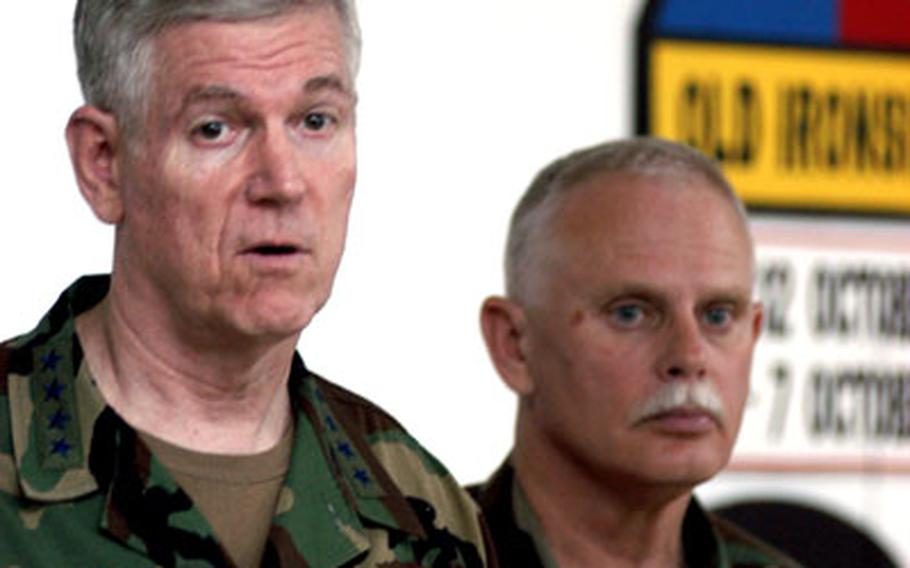 Gen. Richard Myers answers questions during a brief meeting with the press at Eagle Base. At right is Brig. Gen. Timothy Wright, commander of Multinational Brigade North and commander of the Indiana National Guard&#39;s 38th Infantry Division in Bosnia. (Ivana Avramovic / S&S)

&#8220;The U.S. will be part of the mission here into the future,&#8221; said Gen. Richard Myers, chairman of the Joint Chiefs of Staff, during a visit Tuesday to Eagle Base.

&#8220;There&#8217;s a certain part of this mission that will be maintained by NATO even when the [European Union] takes over the primary role here in Bosnia and Herzegovina.

&#8220;As part of the NATO force, the U.S. will be involved, and during the mission which pertains to those folks that have been indicted for war crimes, counterterrorism and so forth.&#8221;

While Myers applauded the recent defense reform initiatives in Bosnia that have brought the country&#8217;s ethnically dominated armed forces under single command, he reiterated that it is the responsibility of the Bosnians to implement other reforms to promote stability and bring the country closer to the standards of Partnership for Peace countries, NATO and the EU.

Myers, who flew in from Washington, D.C., spent Tuesday with the troops in the Balkans, first in Bosnia, then in Kosovo.

During a brief meeting with the media, Myers talked about the Balkans, but also answered some questions about Iraq.

&#8220;The action of a few soldiers is absolutely appalling, despicable and in no way represents members of the American armed forces,&#8221; he said, commenting on recent reports of abuse of Iraqi prisoners. &#8220;And clearly anybody involved in any wrongdoing will be served justice.&#8221;

He said the people in the Balkans are well aware of the care and kindness of U.S. forces.

&#8220;If anybody knows that, it&#8217;s the people of this country who have been working with the American troops now for eight years, and understand the character and compassion that the U.S. forces have for their mission and for the people,&#8221; he said.

However, one important issue &#8212; the arrest of the persons indicted for war crimes &#8212; is still a great concern for many Bosnians.

&#8220;I think that eventually they will be arrested because in my view this country and the region cannot progress unless the people who have perpetrated the crimes they&#8217;ve been alleged to have [done] are brought to justice,&#8221; Myers said.

He concluded the mini-news conference by praising the work of U.S. servicemembers in Bosnia.