Myers: Explosion that killed 22 at Iraq mess tent was likely a suicide bombing 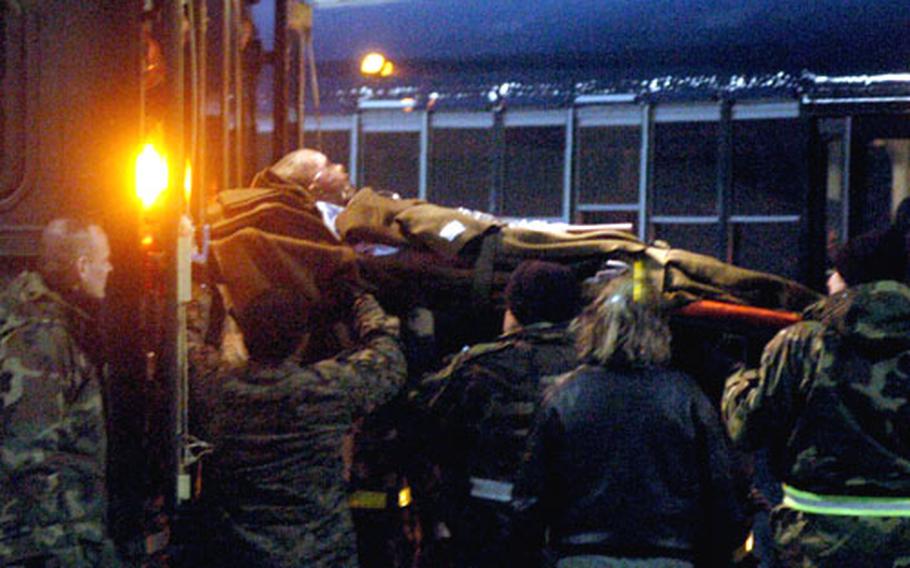 A soldier wounded in the attack on the American base in Mosul, Iraq, is loaded onto a bus at Ramstein Air Base. At nearby Landstuhl Regional Medical Center, trauma surgeons and volunteers prepared as more than 40 wounded in the explosion at the dining facility were flown in Wednesday night on a U.S. Air Force C-141 Starlifter. (Michael Abrams / S&S)

ARLINGTON, Va. &#8212; Tuesday&#8217;s explosion in the dining hall at a base in Mosul was caused by a suicide bomber, Chairman of the Joint Chiefs of Staff Gen. Richard Myers said Wednesday.

&#8220;At this point, it looks like an improvised explosive device worn by an attacker,&#8221; Myers told Pentagon reporters.

An additional 69 people were injured in the attack, &#8220;including 44 U.S. military, 7 U.S. contractors, 5 Department of Defense civilians, two Iraqi civilians, 10 contractors of other nationalities, and one of unknown nationality and occupation,&#8221; Myers said.

Asked whether the unidentified person who was killed might be the suicide bomber, Myers said that &#8220;is to be determined.&#8221;

A Pentagon command statement issued later Wednesday said: &#8220;Evidence found at the site includes components normally associated with imporvised explosive devices. There was no physical evidence of a rocket, mortar, or other type of indirect fire weapon.&#8221;

&#8220;As a result of these findings,&#8221; the statement said, Lt. Gen. Thomas F. Metz, commanding general of the multinational corps in Iraq, &#8220;has ordered a full investigation to determine the complete facts and circumstances surrounding the attack.&#8221;

Defense Secretary Donald Rumsfeld, also at Wednesday&#8217;s briefing, offered condolences to the families and friends of the dead and wounded, saying that &#8220;their grief is something I feel to my core.&#8221;

About 50 people &#8212; most of them injured soldiers from Mosul &#8212; arrived on an Air Force C-141 transport plane at Ramstein Air Base in Germany for treatment at nearby Landstuhl Regional Medical Center, said Maj. Mike Young, a base spokesman.

The hospital said at least eight were in critical condition, Landstuhl spokeswoman Marie Shaw said. With a light snow falling, some wounded were carried out on stretchers, while about a dozen were expected to be well enough to walk off the plane.

An Associated Press reporter saw almost no cars or people on the streets of Mosul on Wednesday and most schools in the city were closed, although a formal curfew was not declared.

Even traffic policemen were not at major intersections as usual.

Asked whether it was wise for so many servicemembers to been put together in a &#8220;soft&#8221; facility at the same time, Myers bristled.

&#8220;We know how difficult this is to prevent people bent on suicide.

Commanders trying to protect troops from insurgents &#8220;have to be right 100 percent of the time,&#8221; Rumsfeld said.

BAGHDAD, Iraq &#8212; A preliminary investigation indicates that the explosion at the U.S. Army dining facility at Forward Operating Base (FOB) Marez in Mosul on Tuesday was likely caused by an improvised explosive device worn by a suicide attacker.

Evidence found at the site includes components normally associated with improvised explosive devices. There was no physical evidence of a rocket, mortar, or other type of indirect fire weapon.

As a result of these findings, LTG Thomas F. Metz, Commanding General, Multi-National Corps-Iraq, has ordered a full investigation to determine the complete facts and circumstances surrounding the attack.

"Our prayers and condolences go out to the loved ones and families of these brave men and women," said Gen. George W. Casey, Jr., Commanding General, Multi-National Force-Iraq. "We will determine exactly what happened at FOB Marez and continue to work to ensure the safety and security of our people and our operating bases."

"Insurgents are desperate to create the perception that elections are not possible," said General Casey. "We will not allow terrorist violence to stop progress toward elections."

Updated information establishes that 22 people were killed in the attack, including 14 U.S. service members, four U.S. civilian contractors, three members of the Iraqi Security Forces, and one unidentified non-US person.

The names of the dead are being withheld pending notification of next of kin.