My dusty valentine: Marine couple deployed together in Helmand 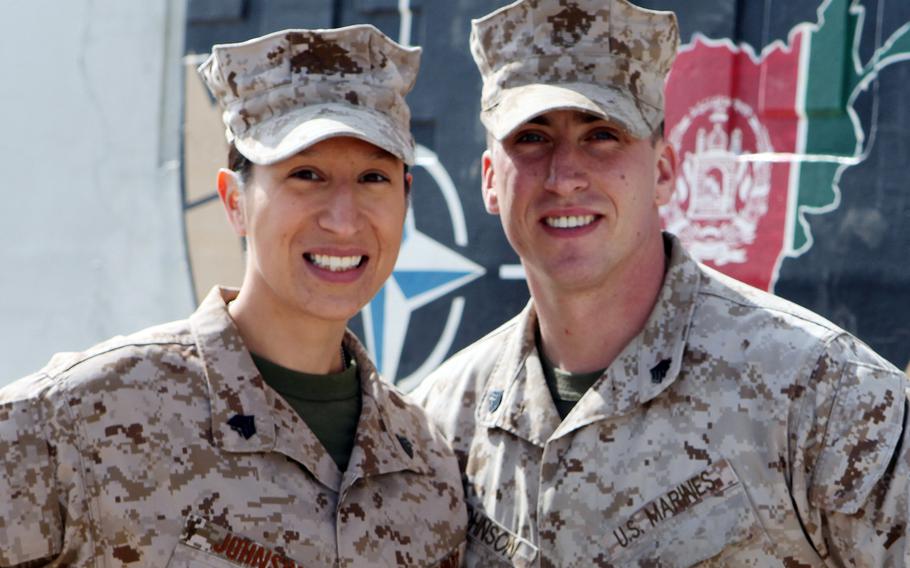 Sgt. Frances Johnson and Sgt. Andrew Johnson were married on Nov. 20, 2010. They are deployed to Camp Leatherneck in southwest Afghanistan. (Jessica Ostroska/Courtesy to Sta)

Sgt. Frances Johnson and Sgt. Andrew Johnson were married on Nov. 20, 2010. They are deployed to Camp Leatherneck in southwest Afghanistan. (Jessica Ostroska/Courtesy to Sta) 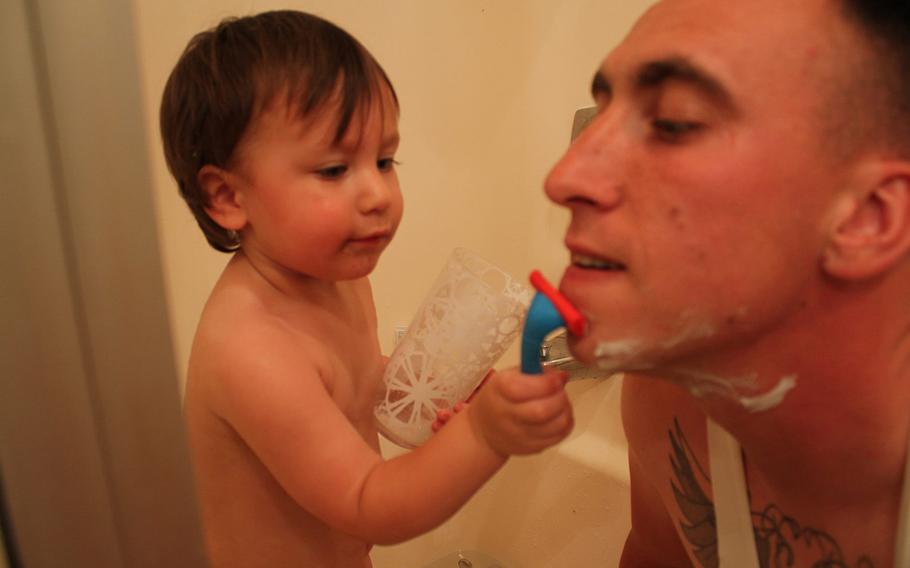 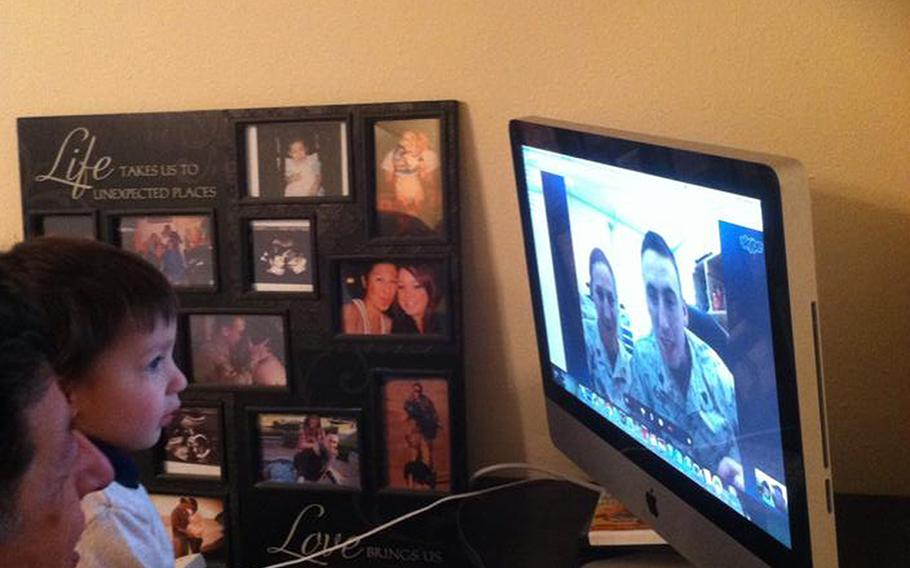 Sgt. Frances Johnson and Sgt. Andrew Johnson sip coffee at Camp Leatherneck after a long day at work. The couple is married and deployed to Afghanistan together. (Jennifer Hlad/Stars and Stripes)

CAMP LEATHERNECK, Afghanistan — It all started with a bulldog.

Sgt. Frances Johnson, then a lance corporal working in the public affairs office at Marine Recruit Depot San Diego, was tasked with taking care of the new mascot, Pfc. Belleau Wood. The puppy needed obedience training, so Johnson headed over to the recruit depot’s kennels.

As luck would have it, the Marine who was supposed to help Johnson with the training was busy. So, Sgt. Andrew Johnson, a military dog handler, volunteered to help.

Now, less than four years later, Frances Johnson and Drew Johnson are married and deployed together to Helmand province as part of Marine Expeditionary Brigade-Afghanistan. Frances serves as the media chief for the unit, while Drew is the IED detector dogs program manager.

At first, Frances said, the couple were rarely able to see each other — just the occasional meal together in the chow hall. “It was frustrating,” she said.

After a month in Afghanistan, the Johnsons have been approved to live together.

Staying on a sprawling base in buildings, not tents, and having access to Wi-Fi and other amenities is very different than Drew’s first deployment, in 2005, when he was part of a unit pushing through Ramadi, Iraq. But he had no attachments on those deployments, he said — no wife, no kids, no girlfriend.

Then, it was “no big deal” to be outside the wire constantly for missions. Things have changed, but he is happy to be able to help his wife get her gear ready before a convoy, to give her advice about staying safe — he told her to use her knife if anyone gets too close — and to give her the guidance he didn’t have his first time around.

The Johnson family deployment almost didn’t happen. Drew, stationed at Camp Pendleton, Calif., was planning to get out of the Marine Corps and had told his supervisor he was looking for contracting work, while Frances had gotten orders to deploy to Afghanistan from her unit at nearby Marine Corps Air Station Miramar.

Then, Drew’s supervisor told him there was a job available for a staff noncommissioned officer at Camp Leatherneck, and he could put Drew’s name in for it.

And so, Drew, said, it was just “sheer luck” that he got to go on his third deployment with his wife.

The couple’s 2-year-old son, Noah, is living with Frances’ mother in Denver while the two serve their yearlong tour, but they have been able to make video calls home every few days, they said.

Frances said she is planning to send a world map home so Noah can have a better idea of where Mommy and Daddy are, though they’ve already told him they are so far away that it’s time for them to go to bed when it’s morning where he is.

He was having a hard time getting off the calls at first, they said, but now he likes saying “night night” and telling his parents that it’s time for them to go to bed, Frances said.