'My dad was doing cartwheels': Deployed guardsman and his unit surprise daughter with a cheer routine 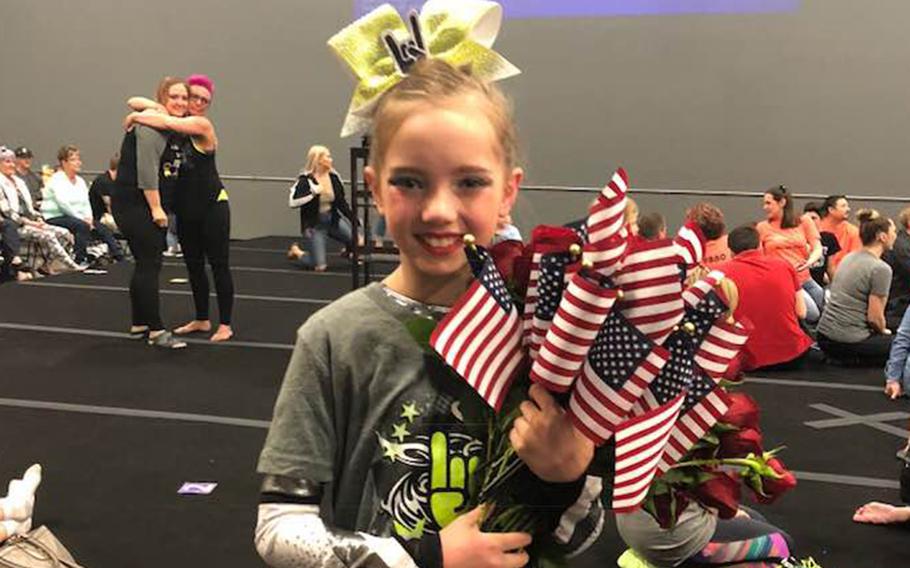 Mikayla Lange's cheer squad was about to set off to compete in Florida. The dads of the other girls had performed a good-naturedly goofy routine to some booming techno music, but her father wasn't able to be there because he's deployed in the Middle East with the Iowa National Guard. Then 9-year-old Mikayla, sporting a giant green bow, was called up to the front.

"We wanted you to feel special, and all of those dads are now your dad," said a cheer instructor. The dads lined up, and each gave Mikayla a mini American flag and a rose. And then her father, Sgt. 1st Class Robert Lange, sent her a high-stepping, cartwheeling, arm-waving surprise from afar. It came in the form of a video featuring him wearing a "Never Dreamed I'd Be a Cheer Dad, But Here I Am Killin' It!" T-shirt.

Lange said, "Hey, Mikayla, I'm sorry I couldn't be there, but I can't wait to get home and see ya." Then he and his fellow guardsmen did their very best attempt at a cheer routine. They even attempted some lifts.

"We can verify that Sgt. 1st Class Robert Lange's soldiering is better than his cartwheeling, but we're glad to see the maintenance section with Headquarters Support Company, 248th Aviation Support Battalion, 67th Troop Command, Iowa National Guard is getting in some good PT while overseas!," declared the Iowa National Guard's Facebook page.

But what did Mikayla think of all this?

"It felt amazing," she toldABC News. "At first, I was bawling my eyes out, then I figured, 'Oh, wait, that's cheer music.' And I looked up at the screen, and my dad was doing cartwheels."