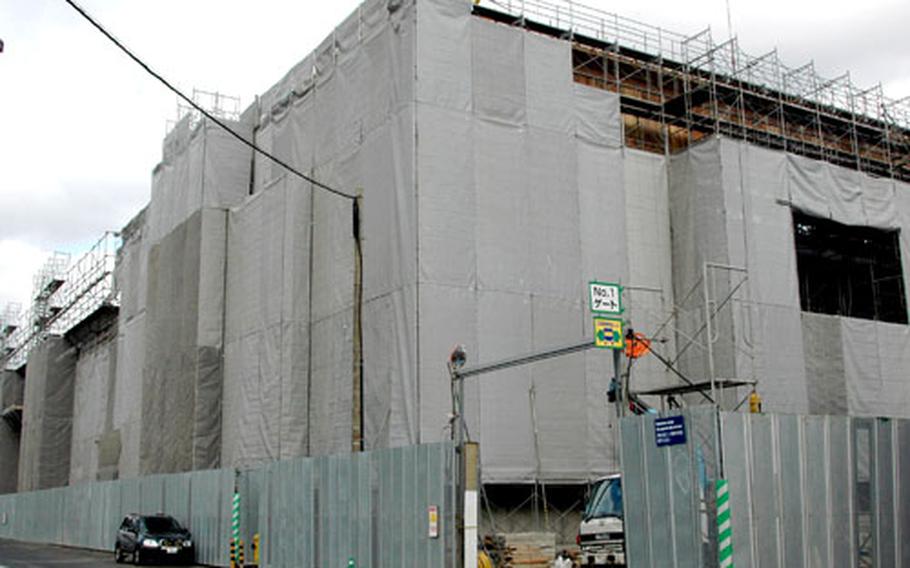 A new Fleet Fitness Center is being built at Sasebo Naval Base by the Japanese government. The $19 million facility should be complete by June 30, officials said. (Greg Tyler / S&S)

SASEBO NAVAL BASE, Japan &#8212; The opening of a new, $19 million Fleet Fitness Center is among several facility improvements and service enhancements that Morale, Welfare and Recreation has planned here for 2006.

He said it was too early in the year to estimate the cost of the upcoming projects.

The new, three-story Fleet Fitness Center, being built beside the India Basin by the Japanese government, will have about 80,000 square feet of floor space, Fukuoka Defense Facilities Administration Bureau officials said.

Construction should be complete by June 30, DFAB officials said. Once the center is turned over to MWR, the staff will begin installing equipment and furnishings with an eye on opening in the fall.

The center&#8217;s first floor will include three basketball courts, a free-weight room, a cardiovascular training room, an aerobics room and two racquetball courts. An indoor 25-meter pool will be on the second floor, Carey said, and the third will house the single sailor center Liberty, which will double in size from its present location.

In an interview Wednesday, Carey and Allison Foo, MWR marketing director, outlined some of MWR&#8217;s other planned projects:

Hario Fitness Center&#8217;s &#8220;major facelift&#8221; includes repainting and wallpapering, adding drop ceilings in several workout areas, installing rubberized flooring and upgrading various equipment.The preteen/teen center will include a &#8220;complete computer laboratory&#8221; and &#8220;give them twice the space they have now,&#8221; Foo said.The library&#8217;s new quiet research/reading room will be located near the existing computer lab and children&#8217;s reading room along the far wall next to the magazine and periodical lounge.Planning is under way to establish more incentives for potential after-hours home child-care providers in addition to the training and certification already offered. &#8220;We&#8217;ve seen the need &#8230; for our dual active-duty families,&#8221; Foo said.During 2005, MWR installed free wireless Internet access at the Harbor View Club&#8217;s Puck&#8217;s Caf&#233; and on the second floor of Galaxies Club. In 2006, Carey said, free wireless access will be installed in several other MWR facilities.Several major projects were completed in 2005 including:

Renovating Showboat Theater.Transforming the all-ranks Tavern in the Harbor View Club into the Harley-Davidson-themed HOG Heaven.Adding new fitness/cardio equipment at fitness centers.Installing a new running track at Nimitz Park.Adding new lighting at Nimitz and the Hario ball fields, and new sod at the Hario fields.Building a new paintball range at Sakibe.&#8220;We might be perceived as just a small base, but we try to provide everything we can here that might be available at locations in the States or up in Tokyo,&#8221; Foo said.