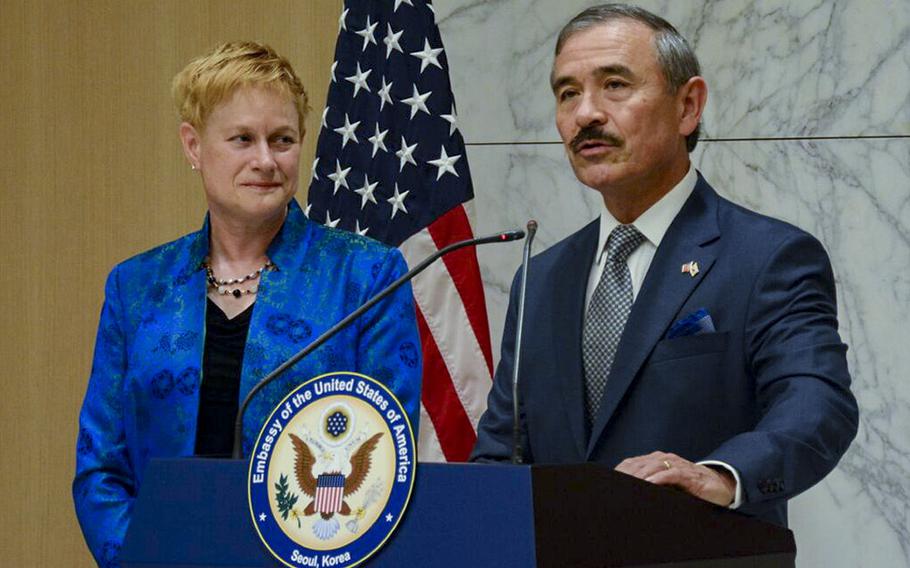 Retired Adm. Harry Harris sports a mustache while speaking to reporters alongside his wife, Bruni Bradley, at Incheon International Airport after arriving Saturday to start his new job as U.S. ambassador to South Korea. (KIM GAMEL/STARS AND STRIPES)

SEOUL, South Korea — Retired Adm. Harry Harris has a new look to go with his new role as U.S. ambassador to South Korea.

Harris, who was in charge of U.S. forces in the Pacific before retiring from the Navy, decided it was time for a change after being clean-shaven for most of his military career.

“I had a mustache when I was a junior officer,” he said Saturday after arriving in Seoul to take up his post. “I thought that it would be a nice break from wearing the uniform as a flag officer through now wearing the uniform of a diplomat, or trying to fit in one.”

“So, it’s a little bit different, but I think it is a good break,” he added.

Harris landed in Seoul at about the same time that Secretary of State Mike Pompeo ended a two-day visit to North Korea aimed at following through on the June 12 summit between President Donald Trump and leader Kim Jong Un.

Harris kept his remarks focused on the importance of the longstanding U.S.-South Korean alliance.

“Our presidents have been in regular contact as we work together to persuade North Korea to chart a new course,” he told reporters during a brief press conference at Incheon International Airport.

He declined to comment on ongoing talks between the two countries over sharing the costs of the 28,500 U.S. troops based on the divided peninsula.

“I don’t want to get ahead of the process and I don’t want to discuss the opening stances if you will in public,” he said, standing next to his wife, Bruni Bradley.

South Korean media have reported that Seoul has rejected a demand by Washington to help pay for the deployment of strategic assets such as bombers and aircraft carriers to the region.

He had been due to become the U.S. ambassador to Australia but was instead nominated by Trump to the post in Seoul on May 23. He was confirmed by the Senate last week.

Harris is filling a position that had been vacant since the previous ambassador, Mark Lippert, left after Trump took office in January 2017.