Muslims in military say ‘everybody belongs’ 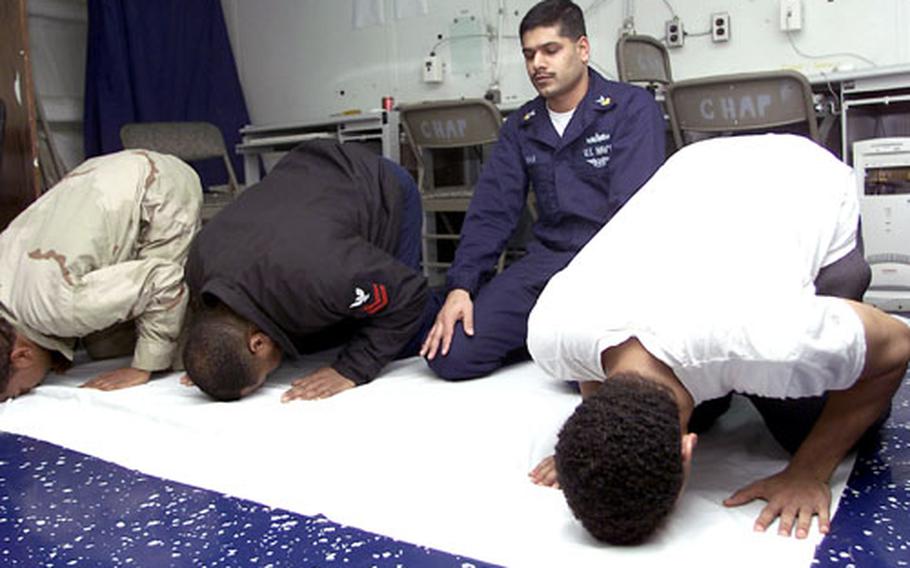 Sailors aboard the USS Saipan pray during a Muslim religious service in 2003, while deployed in support of Operation Enduring Freedom. Muslim troops say the U.S. military community has been tolerant of their religion, and they have been able to coordinate Ramadan observances with their supervisors. (Robert M. Schalk / U.S. Navy)

Sailors aboard the USS Saipan pray during a Muslim religious service in 2003, while deployed in support of Operation Enduring Freedom. Muslim troops say the U.S. military community has been tolerant of their religion, and they have been able to coordinate Ramadan observances with their supervisors. (Robert M. Schalk / U.S. Navy) 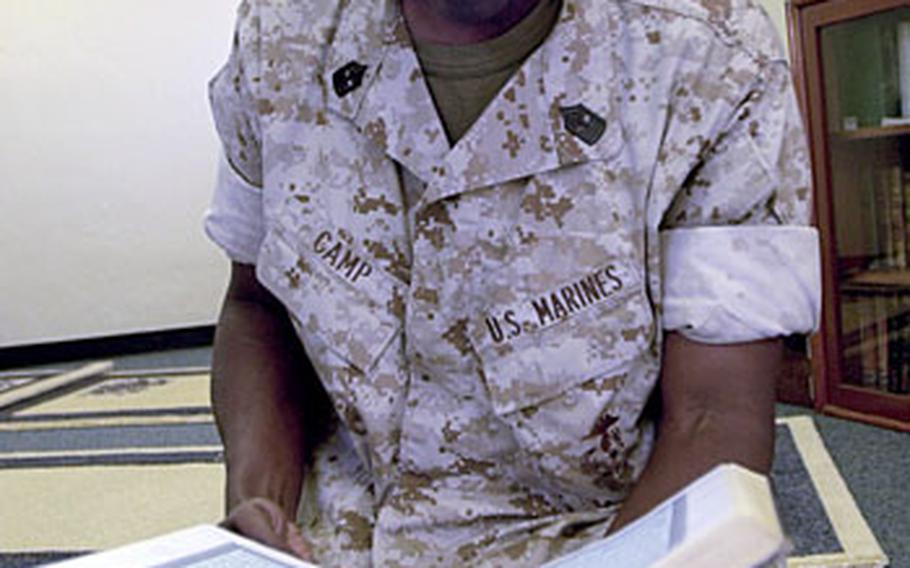 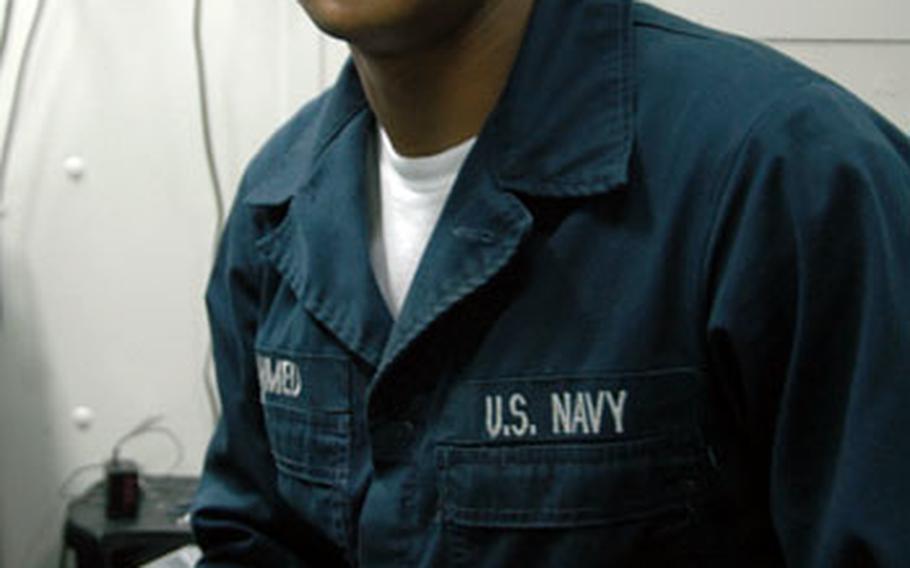 Seaman Mawdud Ahmed joined the Navy to make a better life for himself and give something back to the country that has given his family so much. (Chris Fowler / S&S)

While serving their country, they find time to pray to Allah at least five times a day.

On Fridays, they recite their Jumah prayers in community worship, whether at the Camp Foster Chapel masjid on Okinawa or at a room set aside for them in the base chapel at Misawa Air Base, Japan.

Like other members of faith groups in the minority among U.S. troops, their numbers at Pacific bases overseas are small. But their religion is center stage in the U.S.-led war against terrorism and Islamic extremism.

Things have changed for Muslim servicemembers since Sept. 11, 2001 &#8212; not necessarily for the worse.

They get more questions from mostly curious &#8212; but sometimes sarcastic &#8212; colleagues about their beliefs, and some have searched their souls for answers on how their faith squares up with military duty in this current war.

But even as some American Muslims continue to report discrimination and other difficulties in the United States since the Sept. 11 attacks, some U.S. Muslim servicemembers in the Pacific said they haven&#8217;t experienced any collective backlash.

They said they openly practice their religion without fear of ostracism or discrimination and report few, if any, incidents of unfair treatment.

Cherry, 34, from Louisa, Va., recalls how the military reached out to support him after Sept. 11. He was stationed at Langley Air Force Base, Va. After the attacks, his chief enlisted manager, someone who didn&#8217;t share Cherry&#8217;s faith but often discussed religion with him, called him and said that if Cherry got so much as a bad look, &#8220;I needed to route it up to him,&#8221; Cherry recalled. &#8220;I never got any bad stares or anything.&#8221;

&#8220;We&#8217;ve got protection,&#8221; said Marine Corps Master Gunnery Sgt. Hafiz Camp, a building administrator for Marine Wing Headquarters Squadron One, First Marine Aircraft Wing, on Okinawa&#8217;s Camp Foster, and a practicing Muslim. &#8220;We&#8217;ve got equal opportunity advisers at each level of the command that closely monitor activities of discrimination. In the civilian world, it&#8217;s not that easy. It&#8217;s a very serious issue in the military, and it&#8217;s not tolerated.&#8221;

Camp, 49, is the Sunni Muslim lay leader for the U.S. military&#8217;s Islam community on Okinawa, a group of between 30 and 40, including dependents. He was raised Baptist and converted to Islam 13 years ago while stationed in Hawaii.

He said the only time he felt mistreated because of his faith during his 26-year military career was in 2000. On the first day of an advanced training course for gunnery sergeants at Camp Hansen, Okinawa, Marines were required to take a physical training test.

As a Muslim, Camp can&#8217;t wear shorts that fall above the knee. He asked to wear the PT sweat pants. A squad leader allowed it. The next day, the program&#8217;s deputy director, a master gunnery sergeant, singled him out for wearing the sweat pants. &#8220;What&#8217;s wrong with your uniform there?&#8221; he barked. Camp said he explained that as a Muslim, he couldn&#8217;t wear the shorts.

Fearing reprisal, Camp said he didn&#8217;t mention the issue until two days prior to graduation. The program&#8217;s director, a sergeant major, told Camp the master gunnery sergeant was out of line and that he would speak to him, but he also asked Camp to talk to him. &#8220;I went and talked with him. He gave me a little bit of his religious background (Christian) and said he didn&#8217;t think he did anything wrong,&#8221; Camp said.

The green shorts are still part of the Corps&#8217; official PT uniform, but Camp, to this day, wears the sweat pants. He hasn&#8217;t had a problem since.

Agbere, 39, was born and raised a Muslim in Ghana, west Africa. He&#8217;s been on active duty since September 1999 and soon will be promoted to major.

His experiences in the U.S. military have been mostly positive, he said. Once, while he was deployed to Iraq, someone crossed the line, he said, and was preaching hatred about Muslims.

When Agbere learned of the incident, he brought it to the attention of unit leaders, who took action to correct it. But Agbere views negative experiences as an opportunity to educate.

There are an estimated 1.2 billion Muslims around the world. The Pew Research Center estimates the total population of Muslims in the United States at 2.35 million, though other estimates go as high as 7 million.

In the U.S. military, about 3,400 of the 1.4 million active-duty troops identify themselves as Muslim, according to Pentagon figures. The Army claims the most Muslims, with about 1,500.

Regardless of which branch of service they&#8217;re in, Muslims are supposed to be protected from discrimination by the military&#8217;s equal opportunity program.

Each service has one, to ensure all military personnel, family members and retirees are treated fairly regardless of age, sex, race and religion.

While each military branch provided the number of religious and other equal-opportunity complaints it receives annually, none categorized religious grievances by denomination.

Religious complaints, however, ranked among the lowest in reports provided since 2001, with race and sex among the highest.

He was accused of espionage, adultery and other misconduct and held in solitary confinement for more than 70 days. Eventually, all charges were dropped.

Yee resigned and was given an honorable discharge and meritorious service award.

In a book he later published, Yee blamed his arrest on anti-Muslim sentiment following the Sept. 11 attacks on the United States.

Seaman Mawdud Ahmed, a Muslim culinary specialist aboard the guided-missile cruiser USS Shiloh at Yokosuka Naval Base, Japan, had no qualms about military service.

The 19-year-old native of Patterson, N.J., joined the Navy nine months ago to get an education and make a better life for himself, he said.

However, his mother, who emigrated with Ahmed&#8217;s father 25 years ago from Bangladesh, wasn&#8217;t so sure being Muslim and joining the military was a good idea.

As a culinary specialist, he is able to make his own meals, giving him more flexibility to meet Islam&#8217;s dietary requirements, including the prohibition against pork.

As lay leader, Camp, the master gunnery sergeant from Okinawa, acts as an advocate for the Muslims in his fold in the absence of a Muslim chaplain. &#8220;A lot of youngsters bring issues to me,&#8221; he said.

He recalled one young Marine on Okinawa who was prohibited from praying at his workplace.

Cherry, the technical sergeant at Misawa, has found that being upfront with his supervisors and colleagues about his religion and any special accommodations he might need has headed off any potential problems.

While deployed to Kuwait, for example, Cherry got permission to pray at a local mosque, as long as it didn&#8217;t interfere with his military duties.

Chaplains trained to serve troops of all faiths

On the journey to Islam