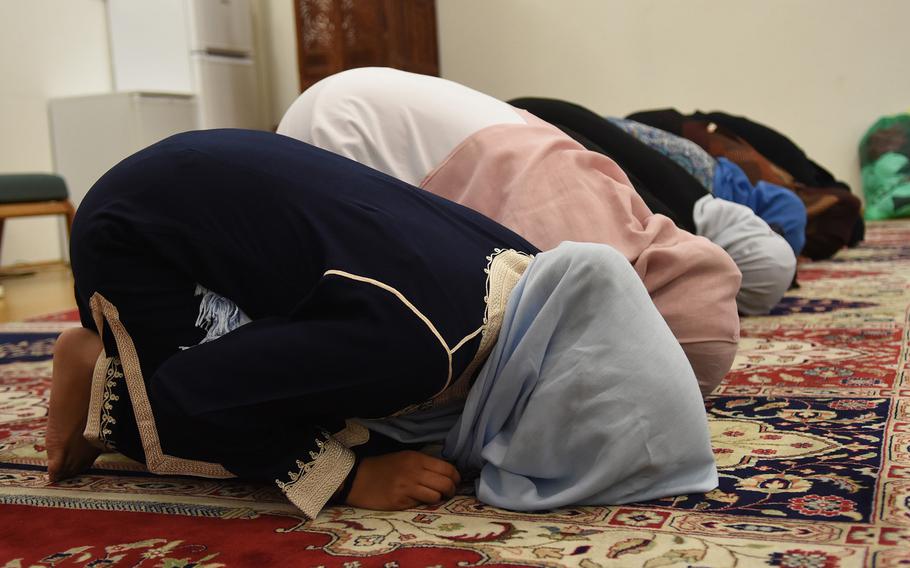 Muslims pray on Saturday, June 10, 2017, at the Southside Chapel at Ramstein Air Base, Germany. The women gather at the chapel with other congregants at night to break fast and pray, a tradition during Ramadan. (Jennifer Svan/Stars and Stripes)

Muslims pray on Saturday, June 10, 2017, at the Southside Chapel at Ramstein Air Base, Germany. The women gather at the chapel with other congregants at night to break fast and pray, a tradition during Ramadan. (Jennifer Svan/Stars and Stripes) 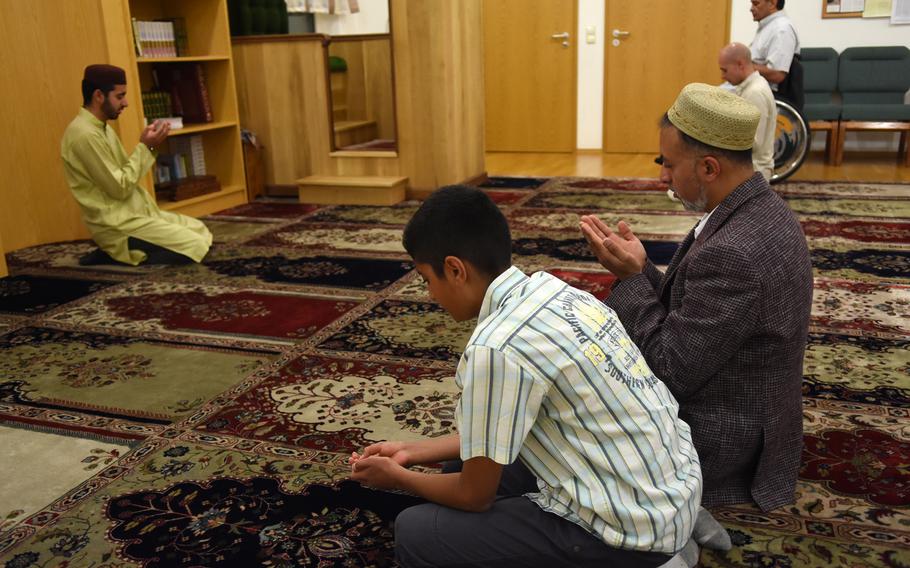 Muslims pray at the Southside Chapel on Saturday, June 10, 2017, at Ramstein Air Base, Germany. During the Islamic holy month of Ramadan, Muslims in the Kaiserslautern Military Community meet at the chapel on Friday and Saturday nights to break fast and pray. (Jennifer Svan/Stars and Stripes) 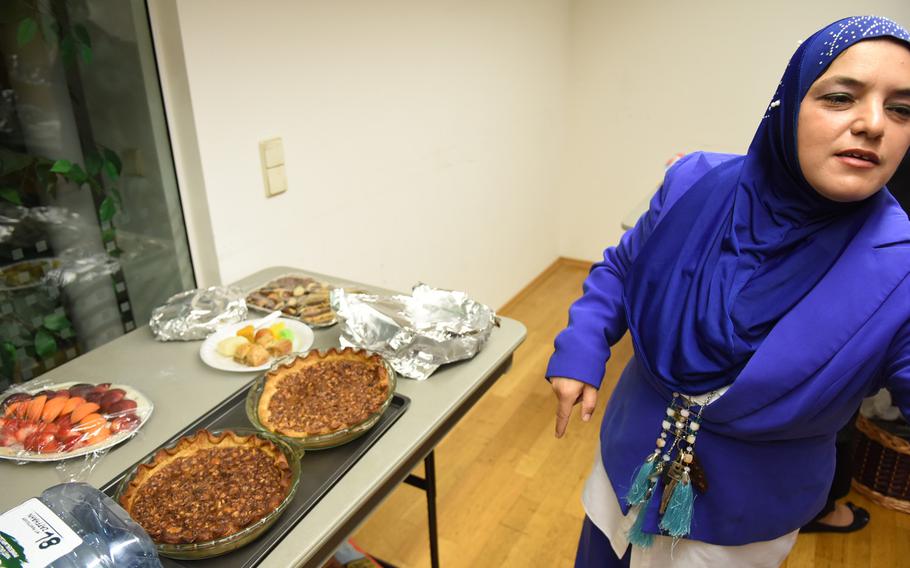 Latifa Steward stands next to the dessert table on Saturday, June 10, 2017, inside the Southside Chapel at Ramstein Air Base, Germany. The desserts were among the food items prepared by Muslim congregants at the chapel to be eaten after the day's fast was over during Ramadan. (Jennifer Svan/Stars and Stripes) 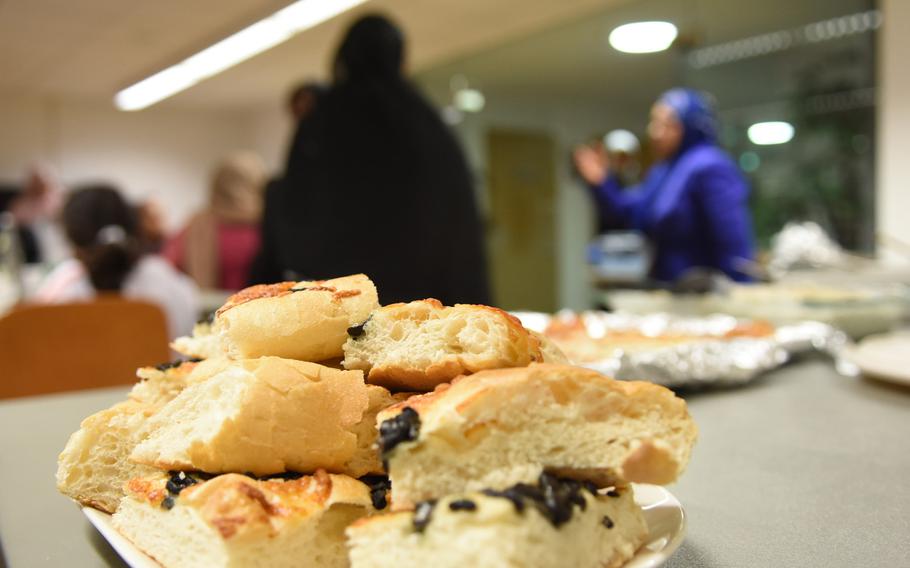 After fasting all day, Muslims get ready to break their fast on June 10, 2017, during Ramadan at the Southside Chapel on Ramstein Air Base, Germany. (Jennifer Svan/Stars and Stripes) 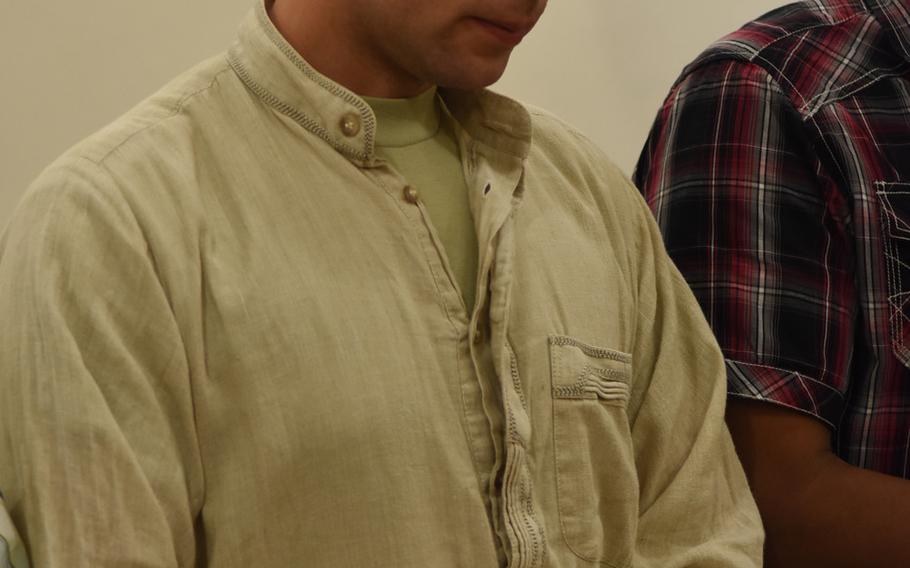 Senior Airman Christopher Sanders converted to Islam about four years ago, shortly before joining the Air Force. He prays with other Muslims on June 10, 2017, at the Southside Chapel on Ramstein Air Base, Germany. Sanders said he's found the military to be accepting of his beliefs, particularly during Ramadan. (Jennifer Svan/Stars and Stripes) 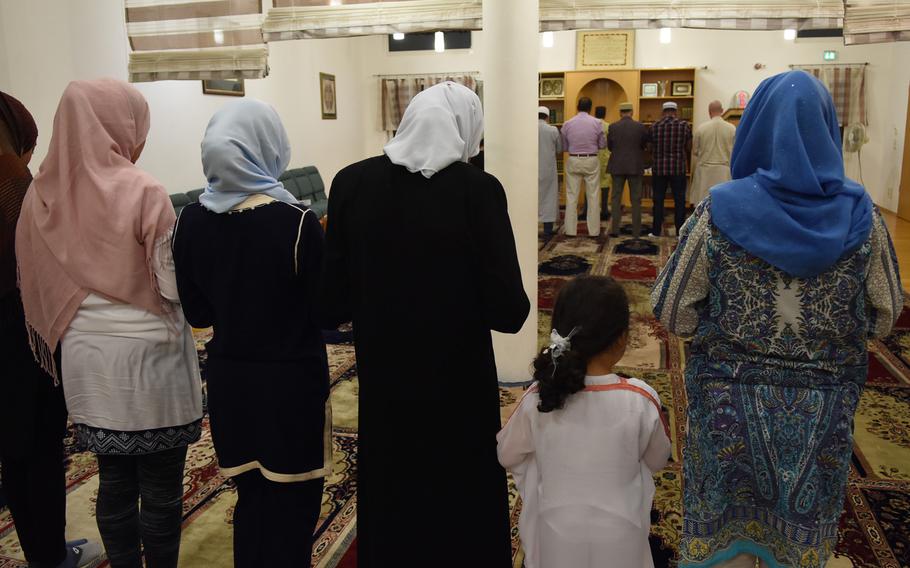 Muslim congregants pray at the Southside Chapel on June 10, 2017, at Ramstein Air Base, Germany. (Jennifer Svan/Stars and Stripes) 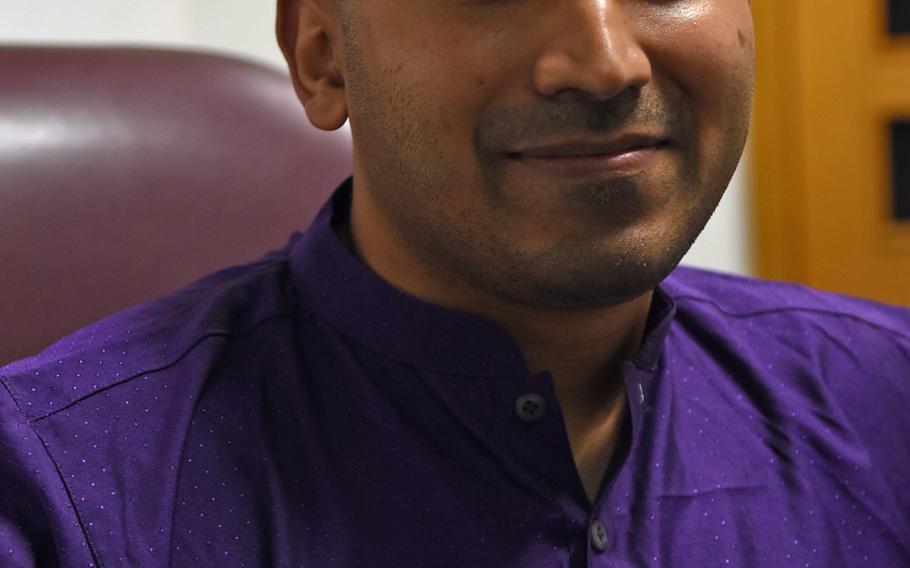 Air Force Capt. Sharior Rahman is a chaplain assigned to the 86th Airlift Wing at Ramstein Air Base, Germany. He is one of only two Muslim chaplains assigned to the U.S. military in Europe. (Jennifer Svan/Stars and Stripes)

RAMSTEIN AIR BASE, Germany — The congregants begin arriving at the Southside Chapel shortly after 9 p.m. on a recent Saturday. Music and laughter from a party outside one of the nearby dormitories fills the balmy June evening.

Senior Airman Christopher Sanders, 27, a base firefighter, is supposed to be working but his unit gave him a few hours off — not to party but to pray.

Sanders is a Muslim. Since the end of May, when the Islamic holy month of Ramadan began, he’s spent most Friday and Saturday nights at the Southside Chapel, breaking fast and praying with other Muslims living in the Kaiserslautern Military Community.

After converting to Islam about four years ago after returning to his hometown in Colorado, Sanders has found acceptance for his religious views in the military despite the rise in anti-Muslim sentiment back home.

“For me to be in the military and a Muslim, I’m very grateful,” he said. “Allah has put good people around me. I don’t have to get the ridicule and stuff like that. There’s no tolerance for that in the military.”

Army Sgt. Maj. Stephen McDermid has had similar experiences since converting to Islam in 2009. A human resources specialist, McDermid was born and raised Catholic and graduated from a Southern Baptist university. He met his wife, also a Muslim, while working at the U.S. Embassy in Tunisia. He converted to Islam to marry her.

“I’ve been exposed to different religions and different lifestyles, but for me, personally, Islam and my wife and her family and just the culture and mindset, kind of put everything in place for me,” he said.

McDermid has found the military to be a protective enclave of tolerance of sorts, a “melting pot” where people generally are less insulated and more exposed to other cultures and beliefs. “We understand that dignity and respect plays a key role in how we treat one another,” he said.

McDermid is granted extra time during Ramadan for daily prayers. His leadership is sensitive to his needs while fasting, he said, which in Germany in June can last up to 19 hours a day. “They understand that typically around 2 or 3 in the afternoon, when you start to get a little bit tired, sometimes we may be a little bit more on edge,” McDermid said.

Sanders’ supervisors ensure he has Fridays off to attend Juma — Muslim congregational prayer — at the chapel every week. With help from an app that alerts him to prayer times, Sanders is able to pray in a bunk room at the base fire station while on duty. “They know when I’m praying,” Sanders said of fellow firefighters. “They’ll walk around me really quietly.”

McDermid said it’s typical to wake up by 3:30 a.m. or even earlier during Ramadan, before the first call to prayer, to eat one last time. Giving up that morning cup of coffee during fasting hours can be rough the first couple of days, he said. “You keep on reminding yourself the purpose behind it: You’re recommitting yourself to Islam; you’re trying to better yourself, atoning for sins.”

Sanders, McDermid and other Muslims in the Kaiserslautern community look to a uniformed spiritual leader for guidance. Imam Sharior Rahman, a captain assigned to the 86th Airlift Wing at Ramstein, is one of only two Muslim chaplains serving in the U.S. military in Europe and one of five Air Force Muslim chaplains.

Rahman said at any given Islam service, the number of congregants, which include military personnel, civilians and families from the greater KMC, range from about 20 to 50, depending on the holiday.

In the Air Force, there are about 700 officers and enlisted personnel who self-report as Muslim, according to service data.

Rahman, who administers to all faiths and denominations, is especially busy during Ramadan. On a recent Saturday night, a flat tire sidelined him while he was en route to the chapel.

The congregants began without him, breaking fast with water and dates, before stepping into a room covered with prayer rugs, the men in the front, the women in the back. They paused to eat a hearty potluck in between more prayers. Rahman eventually arrived. The evening pressed on past midnight.

Before Ramadan began, Rahman sent a letter to military commanders throughout the Kaiserslautern military community informing them that Muslim servicemembers would be fasting from dawn to sunset. He reminds them that Muslims can opt out of physical training during fasting hours, and waivers are also granted for urinalysis testing, Rahman said, referring to accommodations granted across the Defense Department.

“Often times, many Muslims may not speak” up about those things, he said, “because they don’t know. This is why a Muslim chaplain really helps, because they can get the word out.”

Rahman said Islam is a religion of peace, despite its association with recent high-profile terrorist attacks.

“In Islam, when we greet one another we say ‘peace upon you.’ You reply, ‘And onto you be peace,’” he said.

“Whenever you have a barrel so big, you’re going to have rotten apples in it,” Rahman said, referring to the small number of radicals among the estimated 1.6 billion Muslims worldwide.

Terrorist attacks by Islamic extremists — and the portrayal of Muslims by the media — fuel animosity towards all Muslims, he said.

That animosity can also be found in the military, by nature of the current fight, Rahman said. “I was the chaplain for the wounded warriors and it’s difficult,” he said, “especially when you lose a part of yourself or you lose a good comrade. Then you’re like who do I blame? It’s our human nature.”

Rahman sees a tendency by younger Muslims of wanting to hide their religion. He knows of some servicemembers who won’t self-report that they are Muslim, he said, “because they don’t want any discrimination or harassment. I’ve had to deal with a couple cases of that. They’ll just say ‘no preference.’”

His message: “You have to be yourself. I think people will respect you more if you’re genuine.”