Staff Sgt. Azhar Sher from Company B, 1st Battalion, 4th Infantry Regiment speaks with an Afghan National Police officer in Zabul province, Afghanistan, during a deployment in March. Since returning to Europe, the Army has assigned Sher to Heidelberg, where he is trying to get a waiver that would allow him to move off base. Sher had argued that living on base was difficult for his extended family because he is a Muslim. The Army has denied his request. (Adam Mancini/U.S. Army)

Staff Sgt. Azhar Sher from Company B, 1st Battalion, 4th Infantry Regiment speaks with an Afghan National Police officer in Zabul province, Afghanistan, during a deployment in March. Since returning to Europe, the Army has assigned Sher to Heidelberg, where he is trying to get a waiver that would allow him to move off base. Sher had argued that living on base was difficult for his extended family because he is a Muslim. The Army has denied his request. (Adam Mancini/U.S. Army) 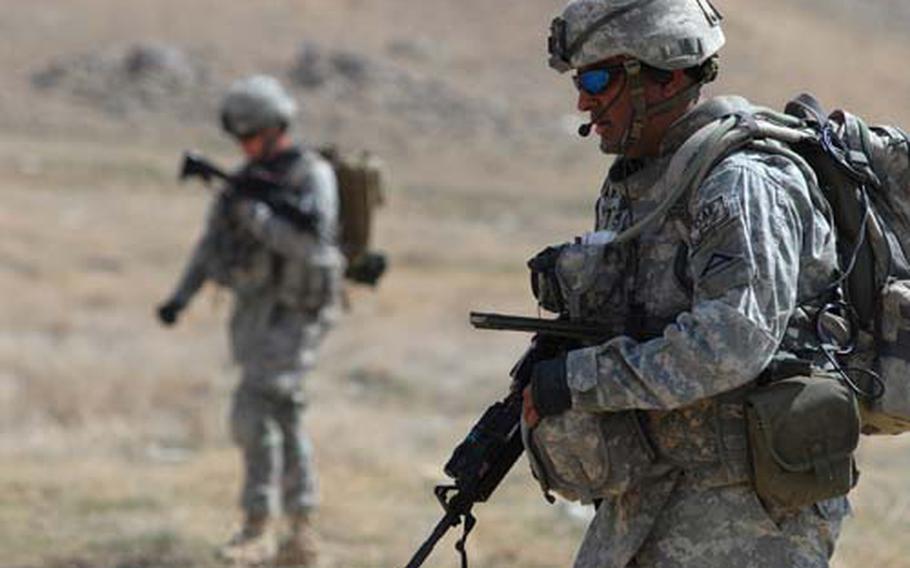 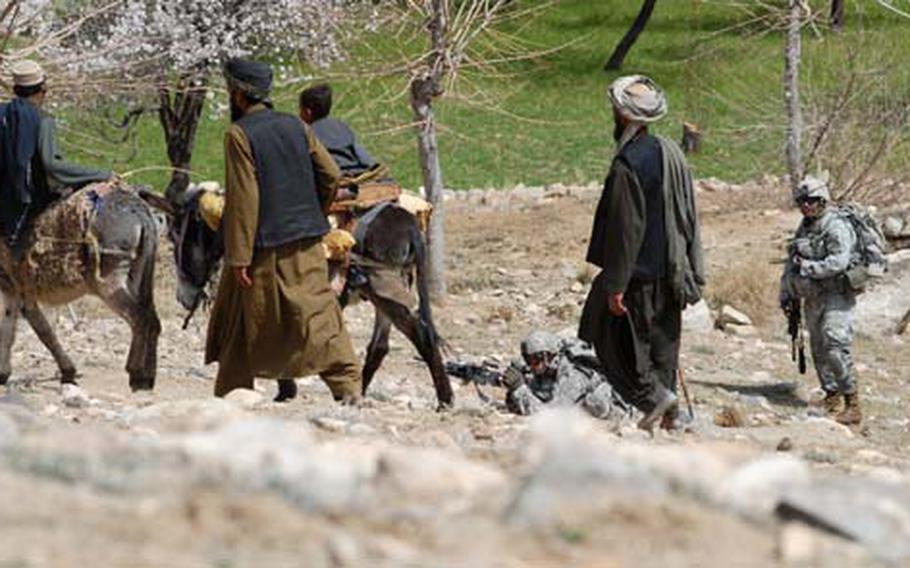 HEIDELBERG, Germany &#8212; Staff Sgt. Azhar Sher is a rare and valued commodity in the Army. Fluent in Pashto and a variety of other languages spoken in Afghanistan, the infantryman has spent most of the past five years there because, he said, he believes in the mission.

But back home, living on post? That can be a problem for a Muslim with Pakistan-born parents, no matter how patriotic.

"I belong to a very large extensive family and, let me be very blunt and honest with you, my family wears traditional clothes and practices their traditional ceremonies just like any other family should and I am very proud of it," Sher wrote to U.S. Army Europe Command Sgt. Maj. Ralph Beam on the CSM&#8217;s blog.

Sher, newly assigned to Heidelberg, wanted to live off-post to ease visits with his parents, brothers, uncles and friends, just as he had when he was assigned to the 1st Battalion, 4th Infantry

Regiment in Hohenfels, Germany. There, he wrote, "Neither my wife nor I have to deal with the hassles of signing in my relatives on post wearing [h]ijabs and [s]halwar kamiz."

But his new command said no.

"I do not believe there is a problem in the Heidelberg community &#8212; or any other military community," Beam responded on his blog. "There are many different ethnicities and cultures living in Army housing. Many of the [s]oldiers have large gatherings around our housing areas with no issues. Give it a chance."

Butcher met with Sher and his wife, a non-Muslim Russian-American he met in Korea. He told them he was sympathetic but that his hands were tied, Sher said.

Sher joined the Army a decade ago, he said, and is comfortable being both a Muslim and a U.S. soldier. But since 9/11, he&#8217;s sometimes been subject to other soldiers&#8217; suspicions &#8212; usually just glances but sometimes hostile comments.

Sher said he was investigated once as a possible subversive. And once at Hohenfels, he said, he dropped an uncle by the main gate to wait for him while he ran an errand; by the time he returned, the military police had questioned the uncle about why he was there.

Sher had returned in September from his latest Afghanistan deployment where, he said, "They didn&#8217;t like me because I&#8217;m an American soldier." He expected he&#8217;d get another exception to the family housing policy.

But every time he&#8217;s tried to explain, leaders told him that the Army community welcomes diversity and celebrates all cultures.

Last month, Gen. George Casey, U.S. Army chief of staff, said there were about 3,000 Muslims in the armed forces. Casey spoke after the Fort Hood shootings, which he said might create a backlash against Muslim soldiers.

But the issue with Sher also has to do with another cultural difference: his extended family.

Sher&#8217;s relatives visit him frequently and for long periods, and he said he wants them to be able to come and go as they please, to be able to get to a mosque on their own.

"They can wear their own traditional dress. They feel at home. Not like I have to take them," he said. "My family is not just ID-card holders."

Butcher has commanded the garrison for about five months, and in that time, he said, he&#8217;s received two or three requests monthly for an exception to the housing policy. The policy states that if suitable family housing on-post is available, that&#8217;s what will be offered. It was revised and tightened in 2007, Butcher said, to save money and optimize resources.

He approved a typical exception recently, he said, for a soldier stationed in Heidelberg whose wife worked in Kaiserslautern.

But "we don&#8217;t authorize housing based on extended family," he said.

Butcher had the policy in mind when he met with Sher last week.

But he said he could not grant Sher&#8217;s request for an exception.

"I honestly believe we have a great, diverse community here," Butcher said.

In the end, a sort of compromise was reached. Butcher called the housing office and was told that a three-bedroom apartment was available in Mark Twain Village, which is close to a mosque and where there are unguarded pedestrian gates.

Sher said the housing office had told him he had to live on Patrick Henry Village, relatively far from downtown Heidelberg, where several civilian guards man an imposing, multilane gate.

Sher wasn&#8217;t thrilled with the solution that would have him living on post for the first time in his career. But he said he thought it was "reasonable.""If they let me live off-post," he said before his meeting with Butcher, "they&#8217;re admitting there&#8217;s a problem."