Bosnian Prime Minister Hasan Muratovic is applauded by a group of Muslims after telling them they can remain in Jusici in September, 1996. (Ken George/Stars and Stripes)

Bosnian Prime Minister Hasan Muratovic is applauded by a group of Muslims after telling them they can remain in Jusici in September, 1996. (Ken George/Stars and Stripes) 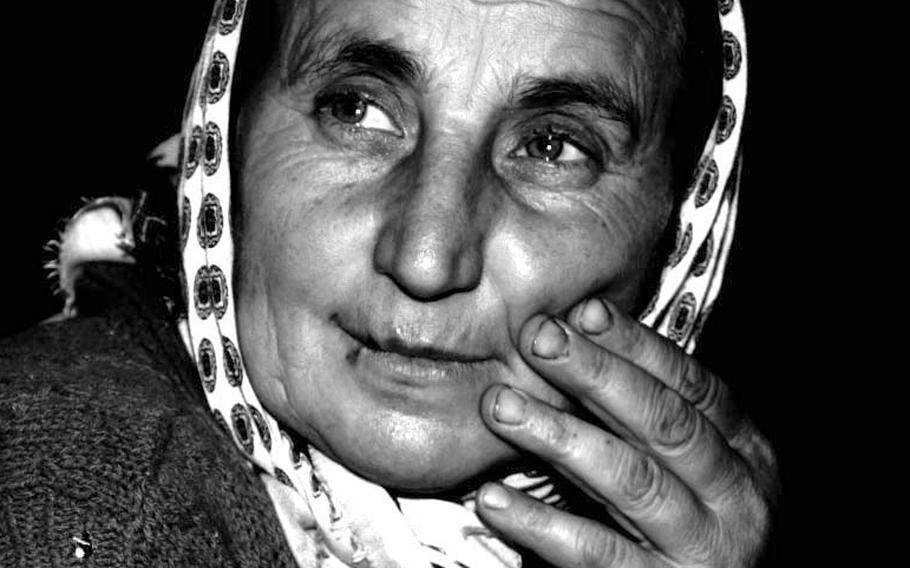 Bosnian Muslim Hanifa Islamovic, who lost her husband and home due to the ravages of war, returned to Jusici in September, 1996. (Ken George/Stars and Stripes) 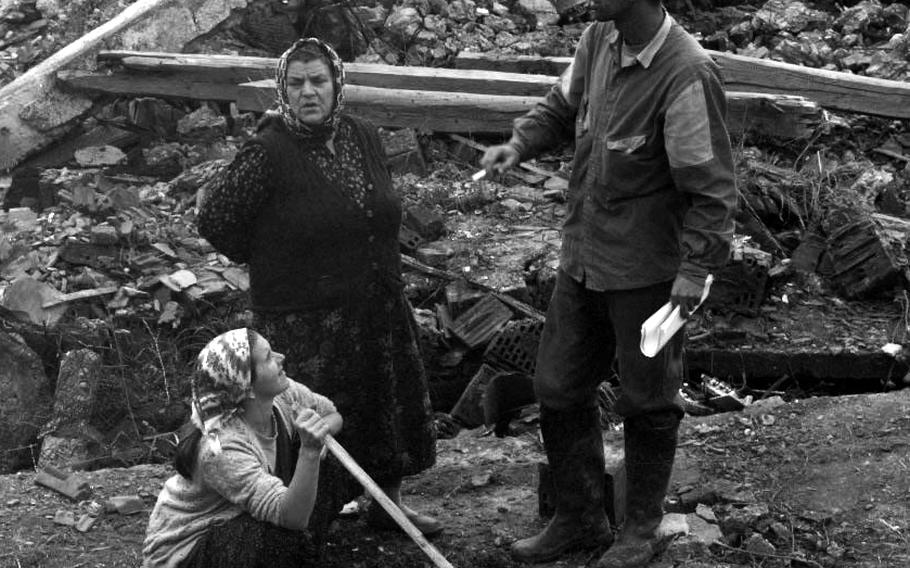 Returning to their homeland in Jusici in September, 1996 for the first time in four years, Bosnian Muslims find their homes completely destroyed. (Ken George/Stars and Stripes) Gen. George Casey meets with members of the Russian Brigade in September, 1996 in an attempt to resolve the issue of a large group of Bosnian Muslims who returned to Jusici. (Ken George/Stars and Stripes) 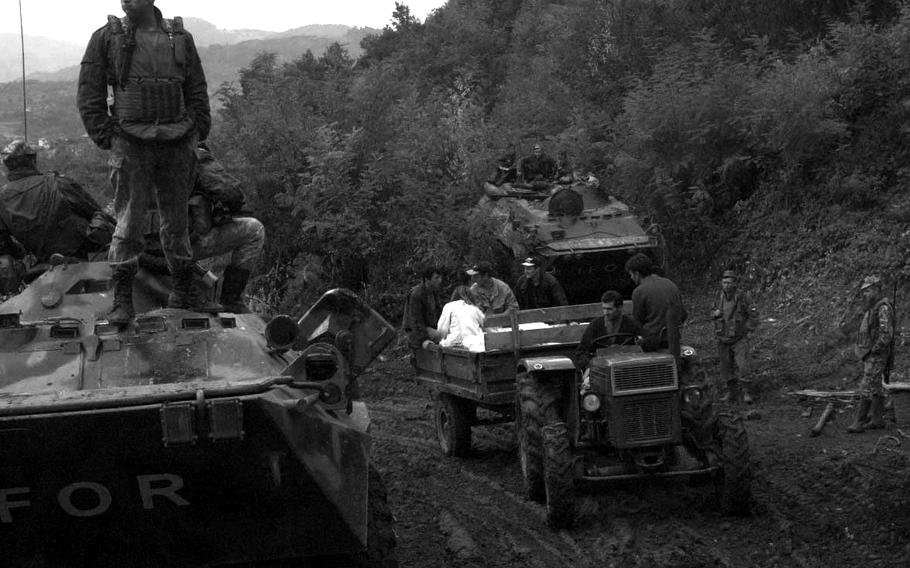 Bosnian Muslims pass a Russian checkpoint as they near Jusici with a trailer full of food supplies for the group of about 150 people who returned, against the instructions of IFOR, to rebuild their homes . (Ken George/Stars and Stripes) 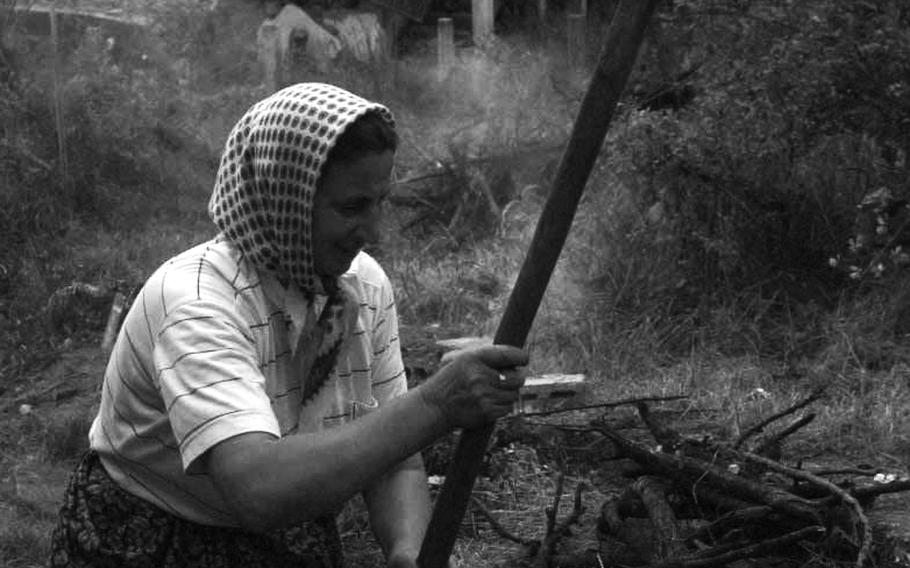 A Bosnian Muslim uses a makeshift hoe to clear what once was the front yard of her mountain village home in Jusici in September, 1996, while men in the background attempt to salvage what is left of a war-ravaged house. (Ken George/Stars and Stripes) Bosnian Muslims labor to get a vehicle full of household goods and food supplies up a steep, muddy hill in Jusici in September, 1996. (Ken George/Stars and Stripes)

TUZLA AIR BASE, Bosnia and Herzegovina — Muslim refugees refused Friday to leave Jusici despite additional pressure from NATO's implementation Force and an agreement on a date of return to the village.

IFOR was preventing supplies other than food, water and medicine from entering the village and was barring anyone who can't prove they were born there,

U.S. officials in the town said Thursday night. Russian IFOR soldiers also cut a phone line the refugees had run into the village.

"It's like living in a prison camp," one of the villagers said. "1 can't believe such an order came from an American general."

U.S. Brig. Gen. George W. Casey Jr. and Felix Vargas, political adviser to the U.S. forces, met with village leaders Thursday night in the back of a Russian military vehicle parked at Jusici.

Casey said the villagers were promised that if they left and completed the required paperwork, those who could prove they owned property in Jusici would be allowed to return within 15 days.

Vargas said the village leaders responded to the offer with "strong language. 'They said something like, they'll leave when we carry them out in caskets," Vargas said.

The refusal came despite assurances from Bosnian Prime Minister Hasan Muratovic that the refugees would leave Jusici once a return date was set.

"We're here and we're going to stay here," Nekir Islamovic, acting mayor of the village, said Friday after the most recent offer. "I don't care if we have to live under the ground."

On Sept. 20, about 130 refugees arrived in Jusici, which is on the Bosnian-Serbian side of the boundary separating the factions.

Last Saturday and Sunday, Russian IFOR troops confiscated grenades, assault rifles and pistols from the group. IFOR ordered the group to leave because weapons are not permitted in the zone around the boundary.

The group also failed to file the proper applications for resettlement.

Part of the agreement with the Bosnian government calls for the refugees to file applications, which if deemed valid would be approved within two weeks, Casey said.

The two-week time frame comes from U.N. High Commission for Refugees experience in the town of Brcko, said Santiago Romero, .head of the refugee organization's Tuzla office. Romero said Brcko is the only town in his area where the process has been used.

Romero said the Jusici refugees had filed 101 applications in the last two days. However, each is lacking a photo identification and proof of ownership of a home in the village.

IFOR is taking a strong stand against the group because its actions are seen as having 'long-term adverse implications for the country," Casey said.

Carrying weapons into the zone of separation is a violation of the Dayton peace accord. Also, such armed groups of civilians were to have been disbanded under the terms of the treaty, Casey said.

"We believe this is a political action designed to provoke the Republic of Srpska," Casey said, referring to the rump government ruling Serbian-held territory in Bosnia.

However, he said the Bosnian Serbs, while concerned by the croup's actions, have behaved appropriately.

Twice during the standoff, U.S. officials thought they had succeeded in convincing the villagers to leave. But on each occasion, the visiting Bosnian ministers surprised the international leaders by encouraging the group to stay.

Last weekend, the Bosnian interior minister instructed the villagers to hold their ground.

On Wednesday, Muratovic told the Jusici residents the Bosnian people would send supplies to help them survive the winter, and Minister of Refugees Nudzeim Recica congratulated them on setting a good example for other refugees.

On Thursday, IFOR officials decided to cut the Bosnian ministers out of the negotiations. That's when Casey stepped in.

In addition to the refugee group's actions, its composition raises concerns.

Casey said that 100 of the original 130 refugees were men of military age. Officials had earlier said that one of the refugees had been an officer in the Bosnian army.

Aside from the young men, most of the Muslims were elderly women, which would be unusual in a typical group of refugees, said Maj. John Kershaw, the 1st Armored Division's liaison officer with the Russian Brigade.

In addition, the Bosnian army officer in the Jusici group had been at the scene of the resettlement effort in Mahala, which erupted into violence between Muslims and Bosnian Serbian police.

At least two others in Jusici were also at Mahala during the tensions there, said Kershaw, who has been with the Russian Brigade in Jusici for much of the week.

Kershaw also said the Muslims are suspiciously well-supplied and funded for a group of simple country folk.

All had enough money to rebuild their homes. They had a particularly good electric generator for a group of refugees. They brought in 100 to 150 bags of cement from Jordan. Also, all of the men had the same kind of boots and rain gear, as if they had been issued, Kershaw said.

When asked Thursday about such support, Muslims in the group denied or downplayed the matter.

Concerning who provided the group with its backing, Casey said, "Right now we don't know, but it seems clear there is external support for the people of this village."

Casey said he doesn't know how long IFOR and the Serbs will wait for a resolution of the matter.

"We are trying to avoid setting timelines and deadlines." Casey said. "Obviously, the longer this goes on the greater is the chance of violence — even inadvertent violence."