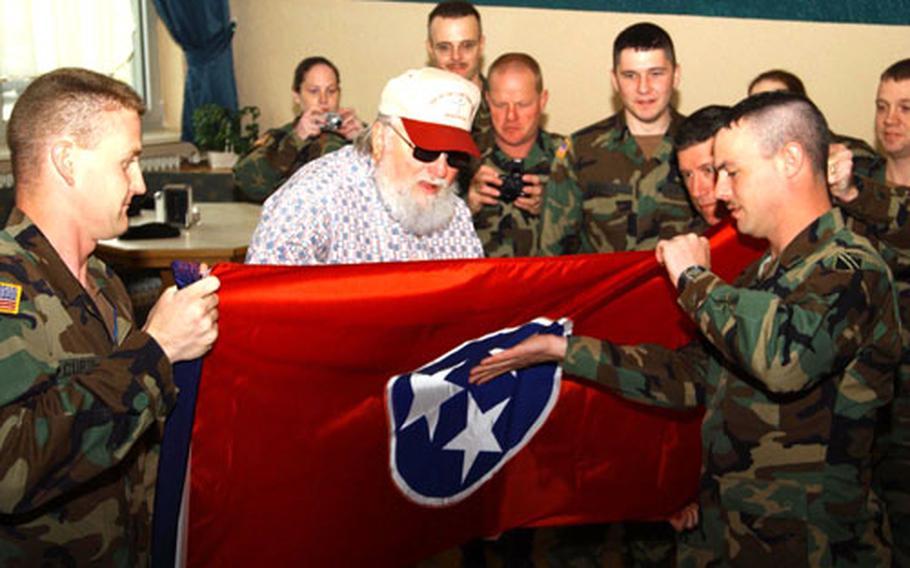 Charlie Daniels on stage at the hangar at the Army Airfield at Wiesbaden, Germany, on Thursday. (Peter Jaeger / S&S)

WIESBADEN, Germany &#8212; It was no ordinary autograph session. For the Tennessee National Guardsmen who met Charlie Daniels and his band Thursday, it was like seeing an old friend.

&#8220;We just wanted to come over and give them a little distraction for a while &#8212; bring a piece of home,&#8221; said Daniels, who is from North Carolina but has lived in Tennessee for the past 37 years.

The lunch and autograph session with about 60 soldiers from the 2nd Battalion, 115th Field Artillery was part of a weeklong trip that included a visit to wounded troops at Landstuhl Regional Medical Center on Tuesday and a Wednesday performance in Kosovo. The visit was to culminate Thursday night with a scheduled concert at Wiesbaden Army Airfield.

The Tennessee field artillery soldiers are serving as provisional military police and have been filling in for deployed MPs since March, guarding and patrolling bases in Stuttgart, Heidelberg, Mannheim and Kaiserslautern.

Daniels said that what touched him the most this week was the spirit of the wounded soldiers at Landstuhl.

The country singer&#8217;s voice wavered as he described the condition of a young soldier who had been shot in the arm and another whose legs had been amputated below the knee.

&#8220;The soldier told me when his arm got shot, that he asked the sergeant major to put a tourniquet on and put the rifle in his other hand,&#8221; Daniels said. &#8220;I wish everybody in our country could come over here and spend an hour walking around, talking to those kids to find out what true patriotism is all about.&#8221;

While at Landstuhl, Daniels also spoke briefly with Thomas Hamill, the civilian contractor kidnapped by Iraqi insurgents and rescued Sunday by American soldiers.

Daniels said that this trip will definitely inspire some new music.