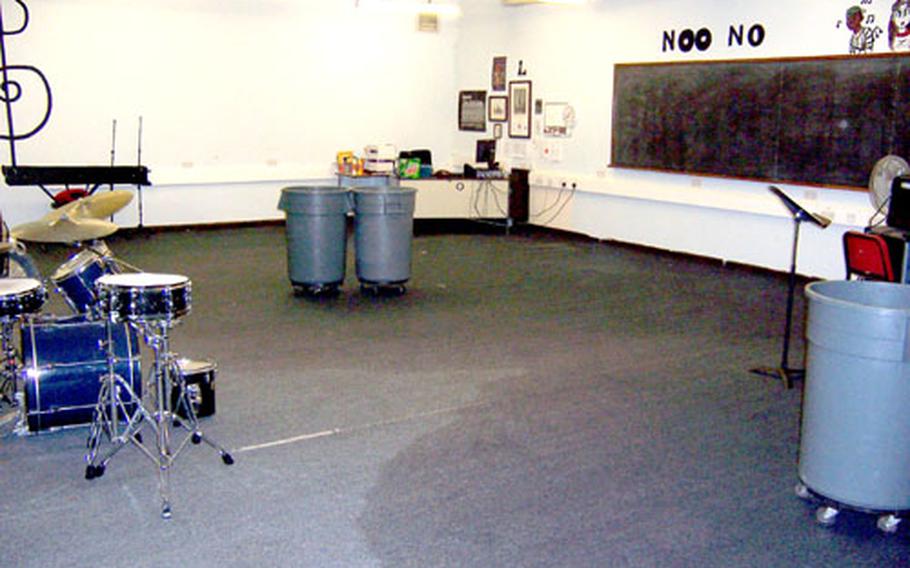 The floor in the band room at Lakenheath High School shows the damage caused by a leaky roof. The building’s flat roof allows water to pool in places and seep through. A planned refurbishment of the room scheduled for summer had to be moved up. (Photos courtesy of Daniel Barbier)

The floor in the band room at Lakenheath High School shows the damage caused by a leaky roof. The building’s flat roof allows water to pool in places and seep through. A planned refurbishment of the room scheduled for summer had to be moved up. (Photos courtesy of Daniel Barbier) 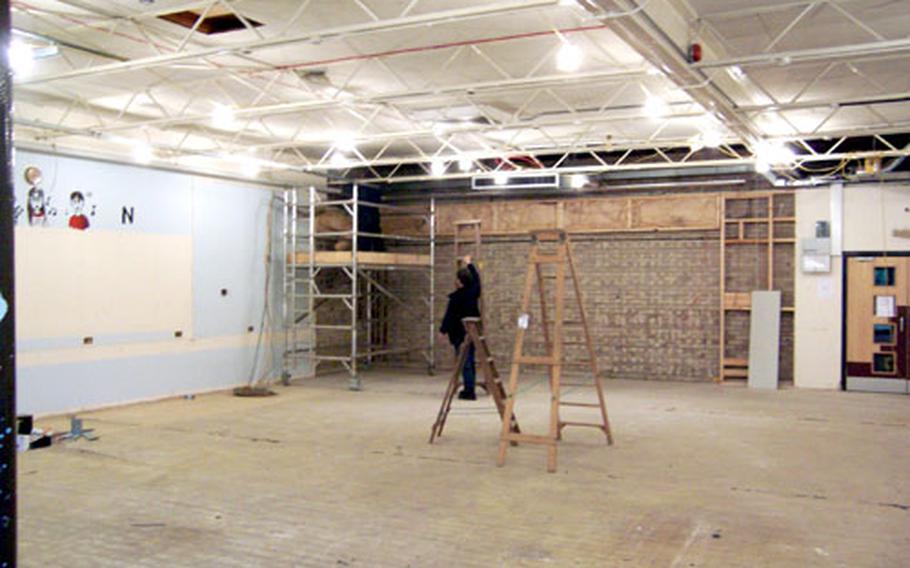 Renovations are under way in the water-damaged band room at Lakenheath. ()

RAF LAKENHEATH &#8212; When the roof over the Lakenheath High School band room began to leak last fall, a wet floor and some unhappy saxophonists might have seemed to be the worst of the consequences.

But in the seven months since the water began to come through, the dripping ceiling has proved to be the catalyst for more complicated problems.

Contractors working in the room found asbestos in a wall, a replacement floor had to be installed twice, and the handling of the renovation became a bone of contention between the administration and the music director.

Workers now hope to have the ceiling, which continues to drip, fixed by mid-June, according to Lt. Col. Gary Schneider from the 48th Civil Engineering Squadron, the military&#8217;s contact on the project.

The problems began in November, when the leak pushed the music program out of its traditional home and into a smaller special education room next door, said Daniel Barbier, the music director at the time.

The building&#8217;s flat roof allows water to pool in places and seep through, in this case near the band room, Schneider said.

The waterlogged ceiling jumpstarted a planned refurbishment of the band room originally scheduled for this summer, and by Nov. 7, a $100,000 renovation of the music room was under way, Schneider said.

But by late winter, problems in the band room were compounded.

As early as Jan. 9, word that asbestos was in the room circulated among workers and staff, and by Valentine&#8217;s Day its presence had been confirmed by engineers.

Chronic exposure to asbestos, commonly used for insulating buildings, can increase the risk of lung cancer and other lung ailments, scientists say. Schneider said the material found in the band room was so small and contained that it did not pose a threat.

The asbestos was determined to be &#8220;nonfriable,&#8221; he said, meaning it wouldn&#8217;t become airborne unless it was disturbed. Workers sealed it off while the long regulatory process and paperwork required for its removal got under way, Schneider said.

Nevertheless, the discovery of the material grabbed Barbier&#8217;s attention.

He said he prodded school officials about the matter, later refusing to re-enter the room until he had written confirmation that it was completely free of danger.

Believing the school was keeping the matter quiet, Barbier decided to help a concerned parent contact other parents about the asbestos.

With e-mail addresses provided by the music teacher, the parent sent a letter authored by Barbier&#8217;s stepfather, Walter Perro &#8212; a former asbestos abatement manager at RAF Mildenhall &#8212; that said the work in the band room was &#8220;subjecting all students and faculty to possible asbestos fiber contamination.&#8221;

Perro said he wrote the letter from Kentucky based on Barbier&#8217;s descriptions of work in the band room and used his experience with asbestos to form his conclusions but had not been to the school himself.

Schneider and school officials said the workers cutting into the walls were not in danger of releasing the asbestos, as Barbier had contended, and no students or staff ever were at risk.

Regardless, a small group of the contacted parents asked for a meeting with the school&#8217;s principal, James McAdams, to discuss the abatement and other band-related issues, which Barbier said took place April 4. He attended.

One parent who attended said she was displeased parents had to &#8220;corner&#8221; officials into talking about the presence of asbestos.

Parents should have been informed about the details of the work in the band room regardless of the potential for a threat, so they could take precautions if needed, she said.

&#8220;As a parent of a child who has a medical condition, I would like to have been informed,&#8221; said the parent, who declined to be identified out of fear there could be a backlash against her daughter.

Two weeks after the meeting with the principal, McAdams sent a letter to parents about the matter, which said the asbestos had been removed April 6.

&#8220;I did not send home information related to this project because I did not feel it was necessary, as there was no danger. I apologize if this lack of information was interpreted as an attempt to hide information, which was not my intent,&#8221; the letter reads.

But asbestos and water leakage aren&#8217;t the only issues the band room has faced.

On Feb. 19, builders and civil engineers decided the new flooring in the band room had not been installed properly and would have to be torn up and reset, Schneider said. The mistake pushed the project back a month from its original Easter completion date, he said.

Barbier said it was about this time that he was preparing to leave the music department. This move followed a Feb. 17 meeting in which he said he was told by McAdams he would not be asked back the following fall as a result of &#8220;a list of allegations&#8221; about his behavior.

One day after the April 4 meeting, Barbier said he received a 30-day termination notice. By the second week of May, he was gone from the school.

Barbier believes his termination is related to the numerous complaints he frequently raised with McAdams&#8217; office about the conditions of the band room and its equipment, along with other issues about how the program was treated by school administration. Many of his complaints, he said, grew from the music room&#8217;s relocation due to the leaky roof.

Barbier said his termination letter, however, referred to allegations that he had used profanity against another staff member, and had improperly given out parents&#8217; contact information, among other reasons. He staunchly denies the allegations.

Officials from Department of Defense Dependents Schools, citing privacy reasons, said they can not discuss the termination but denied it had any connection with Barbier&#8217;s efforts to get word of the asbestos out.

&#8220;I can confirm that this case, from the DoDDS-E perspective, had nothing to do with asbestos,&#8221; DODDS-Europe public affairs chief Dennis Bohannon wrote in an e-mail to Stars and Stripes.

A temporary replacement for Barbier will teach music classes for the remainder of the school year, McAdams said.