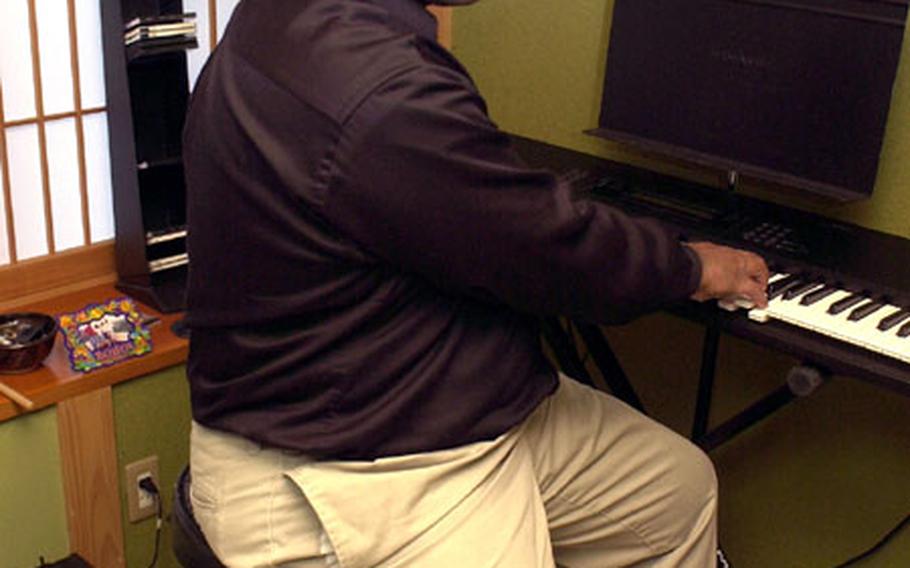 SASEBO NAVAL BASE, Japan &#8212; It&#8217;s a long way from the unforgiving, rugged streets of Chicago&#8217;s west side to a classroom full of cherubic fifth-graders in comparatively pastoral Sasebo.

It&#8217;s just as far from raw gospel hymns banged out on old pianos and belted out by the likes of the Rev. James Cleveland and Mahalia Jackson, to the electronic New Age and contemporary Christian keyboard compositions of George Winston, as well as the ethereal melodies of Enya.

His instrument of choice is the grand piano, but he uses a variety of tools such as computers, software, sequencers, keyboards, synthesizers and other professional musicians to produce his sounds. His smooth and mellow style evolved through the years, although gospel remains an influence in both his themes and playing.

&#8220;My music is influenced by many things in my life, but when people ask me, I tell them I believe I can do what I do because of talent I was blessed with from God,&#8221; he said.

&#8220;But my music is definitely similar to contemporary composers like that of George Winston and Enya with a gospel and classical structure, and I play for secular and Christian audiences,&#8221; Duster said, while getting his students ready to leave school recently. Winston is a well-known New Age solo pianist and composer.

Duster moved to Sasebo last year from Tacoma, Wash., where he taught at Remann Hall, a school for juvenile delinquents who had been locked up, or were about to be. The easygoing former U.S. Army soldier showed his rough and tumble students how to play piano and guitar and build computers.

&#8220;The school was designed to be an alternative to locking them up,&#8221; Duster said. &#8220;What I did was set up an academic program so they would develop their basic skills and work on learning a hobby, mainly in music and computers. They&#8217;d build the computers, then learn music skills using software on those computers.&#8221;

He said some students excelled at Remann Hall, while others didn&#8217;t..

&#8220;But in the whole time I was there, compared to some of the other staff members, there was never a fight that broke out,&#8221; Duster said. &#8220;I was never threatened outside the building like some had predicted I might be. They even took the security guard away, but I managed to keep a cool atmosphere.&#8221;

Cool. Laid back. Mild-mannered. Duster exhibits all those qualities, and speaks with an unshakeable yet breezy, jazzy rhythm.

He and his wife, Liza, who works at Sasebo&#8217;s child development center, first lived off base in a Japanese-style house but recently moved to the Hario facility.

In a front tatami room complete with shoji doors, Duster maintained his recording studio chock full of keyboard systems, guitars, other recording paraphernalia and a computer system he built for creating original musical arrangements. He also burns his own CDs. It&#8217;s his room, the place he finds solace in what he enjoys most.

In the studio, there&#8217;s also a well-worn copy of the Bible, King James version.

But he persevered, enduring threats and mockery.

He settled in Puget Sound after leaving the Army because &#8220;it was the first place I&#8217;d seen in the States where I saw a natural effort by people of different races trying to get along, and I liked the area.&#8221;

He enrolled at Pacific Lutheran University in the late 1980s and with student loans was able to graduate with a business degree in 1990.

&#8220;I knew I&#8217;d need the business degree because of the difficulty everyone has making a living as a musician, although that&#8217;s where my heart&#8217;s always been,&#8221; he said. He also sang in two university choirs, and he developed further electronic music skills in PLU classes.

&#8220;We had to write our own music, but also learn how to play it electronically and make tapes and CDs. We learned mixing and all phases of music production, which is what I do now when I&#8217;m not teaching.&#8221;

On a windowsill, a portable stereo system liltingly plays one of Duster&#8217;s latest CDs, &#8220;O Magnum Mysterium.&#8221; It includes Duster&#8217;s arrangements of holiday favorites and his keyboard work, joined on harp by friend Jessica Hannula.

He also sells his music through word of mouth, and via his Internet site at www.sanddust.com and e-mail at dustersa@yahoo.com.