Music for the masses: chaplain uses his songs to emphasize message 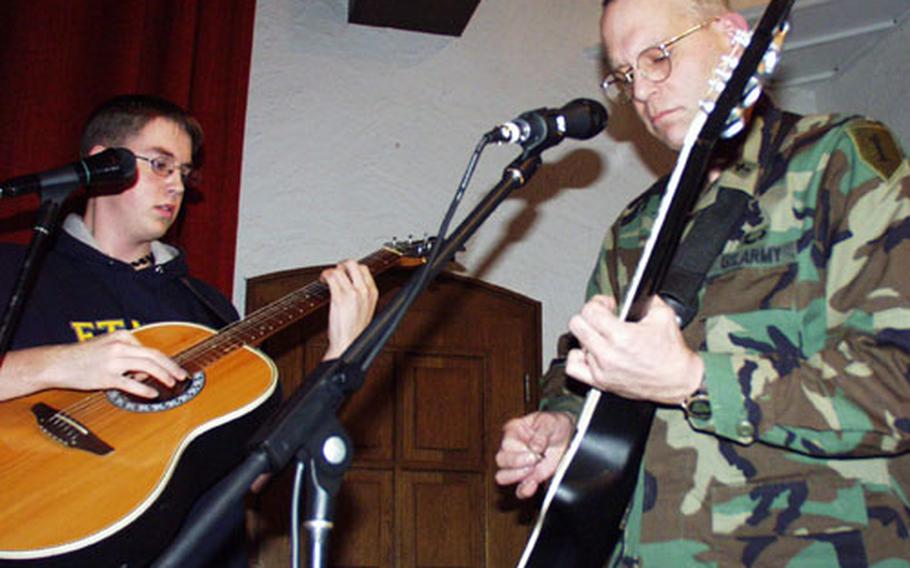 Lt. Col. Mike Lembke, right, an Army chaplain in Schweinfurt, Germany, has composed more than 400 songs in the past quarter century, and he plays them frequently for his military congregations. He and his son, Mike Jr., 16, left, have their own garage band that performs frequently with soldier/musicians as guests. (Steve Liewer / S&S)

SCHWEINFURT, Germany &#8212; For centuries, Christian ministers of every stripe have used music in their services to bring God&#8217;s message to the faithful.

Still, few have relied on music so completely as Lt. Col. Michael Lembke, 46, head chaplain for the 280th Base Support Battalion in Schweinfurt. On many Sundays, he will step down from the pulpit, grab his guitar, and play a rocking religious tune he has composed. Most of the time his son, Michael Jr., 16, joins him as a drummer or guitarist.

Although he&#8217;s never distributed them beyond family, friends and parishioners, Lembke has produced six CDs of music from the 400 or so songs he has written over the years.

Lembke knew as long ago as his early teens in Crawfordsville, Ind., that he would somehow bind together his two callings, music and faith. He grew up in a pious Lutheran family that also loved to sing.

The folk rock music of his youth strongly influenced him, and he started playing guitar at age 13. He played in a series of bands during his college years, but he didn&#8217;t start writing songs until he entered Luther Theological Seminary in St. Paul, Minn., in 1978.

During his four years in seminary, Lembke estimates he wrote about 50 songs to perform for friends and bandmates. He used his songwriting to cope with the stress of his religious studies. To this day, he said, he has been most prolific during difficult times, like the Gulf War and after Sept. 11.

Although his beloved grandfather Werner Krug had served as a chaplain during World War II (a framed portrait of Krug drawn June 7, 1944, by a Chicago newspaper artist aboard a ship off the Normandy coast hangs on his office wall), Lembke never thought much about the Army.

Then he attended a recruiting lecture during his seminary training, and he joined the Army Reserves on the spot. He was commissioned the day before his graduation in 1982.

He was assigned to a large parish in Eugene, Ore., but Army life called. By the time Lembke went on active duty in late 1986, he had been married seven years and had two children: 4-year-old Heidi and 6-month-old Michael Jr.

Two years after the Gulf War, Nancy bought Lembke a four-track music recorder, which allowed him to record and mix CDs. Along with his band &#8220;The Stewarts&#8221; (named for Fort Stewart, Ga., where he was then stationed), he produced his first album, &#8220;A Song for the Army Family,&#8221; from songs he wrote in Saudi Arabia during the Gulf War.

Now a student at W&#252;rzburg American High School, Mike Jr. is a full partner in his dad&#8217;s band. But he started playing early.

At age 6, Mike Jr. graduated to a hand-me-down drum set from a friend of his father&#8217;s. A decade later, he&#8217;s a full partner in his father&#8217;s band and also composes songs for his own garage band, which he formed with two school buddies.

Both Lembkes like a wide variety of music. Mike Sr. lists Frank Sinatra, the New Christy Minstrels, and Johnny Winter among his influences, though he is especially fond of Creedence Clearwater Revival&#8217;s bayou brand of rock &#8217;n&#8217; roll.

Mike Jr. has thought of following his father into the Army chaplain corps, but he&#8217;s recently decided to devote himself to music.

In college, he plans to major in music performance.

In an otherwise musical family, Nancy is the only nonperformer. She doesn&#8217;t mind being the family&#8217;s roadie, setting up equipment and running sound boards.