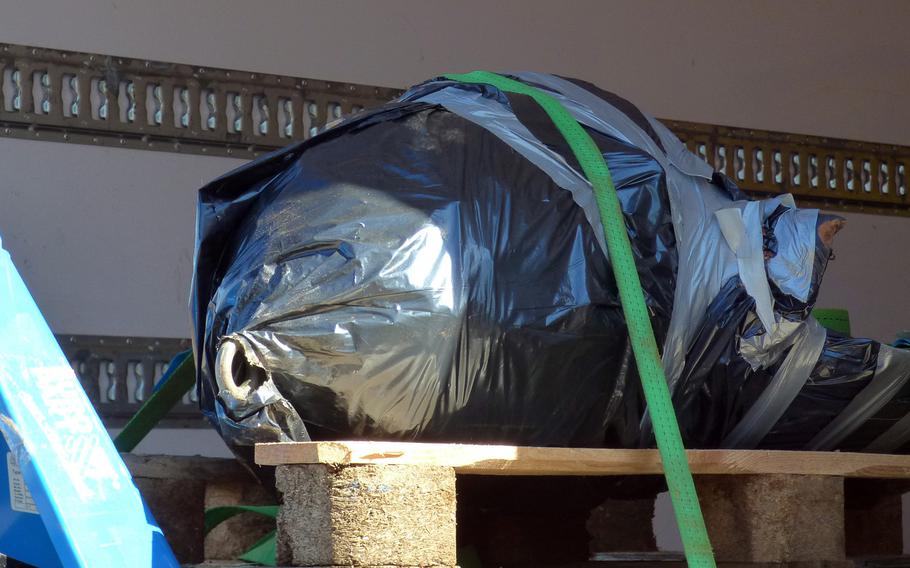 A bomb found at a construction site in the Kaiserslautern district of Einsiedlerhof sits wrapped on a pallet after being defused on March 26, 2017. A 250-pound allied World War II bomb discovered by a mushroom hunter in the woods near Einsiedlerhof will be defused on Wednesday. It's the fourth WWII-era bomb to be found in the area in the past several months. (Photo courtesy Kaiserslautern City Administration)

KAISERSLAUTERN, Germany — A German mushroom hunter found more than he bargained for recently when he stumbled upon an unexploded, World War II-era bomb in the woods.

The 250-pound bomb, said by officials to be partially sticking out of the ground, is the fifth wartime bomb to be found this year in Einsiedlerhof, about seven miles from Ramstein Air Base.

More than 70 years after the war, bomb finds still happen throughout Germany, but rarely are such large explosives found at the surface.

Four bombs were unearthed in the spring near the city’s railroad tracks during construction work.

Officials say it’s unknown whether the bomb was dropped by American or British forces.

German bomb disposal experts will attempt to defuse the latest bomb on Wednesday, a spokeswoman for the city of Kaiserslautern said. The forest where the bomb was found will be cordoned off to walkers and sports enthusiasts. The area affected is south of the A6 highway and west of Jacob-Pfeiffer Strasse, behind the small strip of restaurants between Einsiedlerhof and Ramstein.

No roads or businesses will be closed nor will residences be evacuated, according to the city.

Einsiedlerhof was a popular allied target during World War II because of its railroad and main road, which ran east to west and served as critical supply and transportation lines between France and Germany, said Michael Geib, director of the Ramstein Docu Center in Ramstein-Miesenbach.

About 60 percent of Kaiserslautern was destroyed by allied bombing campaigns during the war, but many bombs never detonated.

Residents and U.S. servicemembers continue to discover them. In 2006, two unexploded bombs were found on U.S. military installations near Einsiedlerhof — a 1,000-pound bomb in the Vogelweh housing area and a 500-pound bomb in Pulaski Park at Pulaski Barracks. Both bombs were disarmed.

Just last week, the discovery of an unexploded WWII-era bomb closed a base gate and parts of a major road near a U.S. Army base in Grafenwoehr, about 250 miles east of Einsiedlerhof.

In Rheinland-Pfalz, the region’s soft soil may be why so many bombs failed to detonate, said Michael Ufer, deputy chief of the Kaiserslautern fire department. “The soil was just not hard enough” to make them explode, he said.

The bomb to be defused Wednesday was off the beaten path, Ufer said, “in the middle of the forest. You have to imagine this bomb was lying there for many decades and no one ever saw it.”

How many more unexploded bombs remain in the area is unknown, he said.

The Americans took aerial photographs when bombing the area, he said. At the time, it might have been possible to compare the number of craters to the number of bombs dropped, but the area has changed a lot over the years and some bombs might have been defused without any records, Ufer said.

Unexploded ordnance will likely continue to be a part of life in Germany, Geib said.

“We still have the problem,” he said. “I guess the next generation will have it, too.”