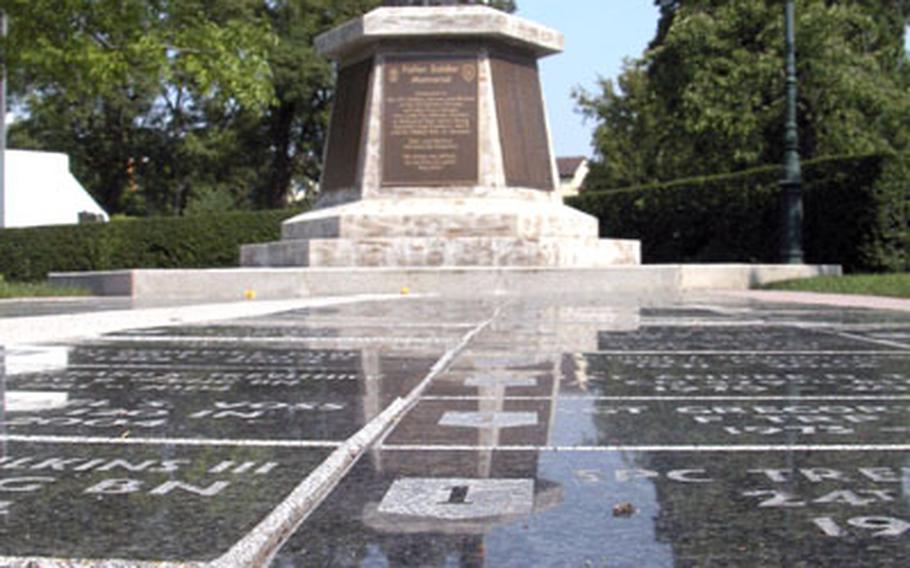 The bricks commemorating the 193 1st Infantry Division soldiers and attached personnel killed in action during operations in Iraq will soon be moved to Fort Riley, Kan., where the division headquarters recently relocated. The fallen soldier memorial at the head of the memorial bricks also will be moved from Victory Park at Leighton Barracks in Würzburg, Germany, along with other park landmarks. (Geoff Ziezulewicz / S&S)

W&#252;RZBURG, Germany &#8212; To walk into the 1st Infantry Division Museum at Leighton Barracks is to take in a cumulative and simulated history of The Big Red One. Wooden supports hold up simulated World War I trenches as a visitor learns about the division&#8217;s creation and early victories.

The exit hatch from a landing craft recreates, if only minimally, what it was like to storm the French beaches on D-Day. Outside, a host of armor and vehicles used by the division through its nearly 90-year history sits on display.

But the division is all but gone. And as the troops go, so will the museum, back to Fort Riley, Kan.

Plans are in place to move most of the museum&#8217;s artifacts &#8212; and some of the vehicles outside &#8212; to the division&#8217;s new base of operations this summer. Along with the museum, Victory Park, which sits just across the street, will have its monuments moved to Fort Riley as well, said Gabriele Torony, the museum&#8217;s director.

The moves likely will start in August or September.

Among the park&#8217;s assets that need to be moved is a memorial to the 193 division soldiers and other attached personnel who were killed during the division&#8217;s 2004 deployment to Iraq as part of Task Force Danger. The monuments and other landmarks from the park will need to be specially packed and cleaned before shipment, Torony said.

&#8220;Special care is going to be taken,&#8221; she said, adding that German contractors will handle the work.

Division-specific museum artifacts will be transported to a new 1st ID museum at Riley, Torony said, and a home is still being sought for the remaining tanks and trucks outside that are not going to Kansas.

Big cranes will be used to move those vehicles heading back to the States.

Through the years, the museum has expanded to include a section on the division&#8217;s part in the ongoing war in Iraq. With faux-roadside bombs in the floor, and columns reminiscent of Iraqi architecture, the exhibit became a popular and authentic destination for division veterans who deployed with Task Force Danger. Little reminders of life down there pepper the exhibit.

Once complete, the moving of the division museum and the monuments at Victory Park will leave no trace of the division&#8217;s long connection to Leighton Barracks.