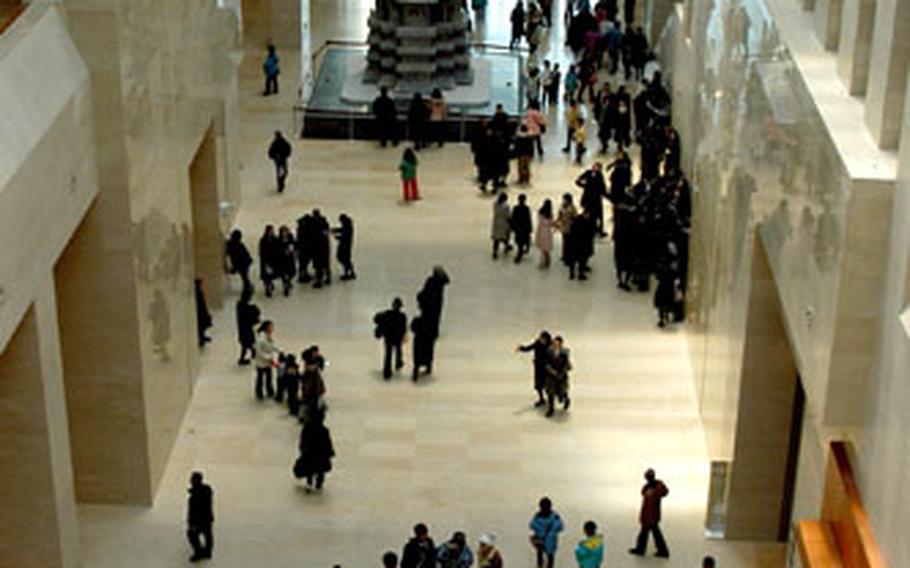 The National Museum of Korea, which opened in October next to Yongsan Garrison in Seoul, includes displays of Korea’s history more than 10,000 years old. (Teri Weaver / S&S)

The National Museum of Korea, which opened in October next to Yongsan Garrison in Seoul, includes displays of Korea’s history more than 10,000 years old. (Teri Weaver / S&S) 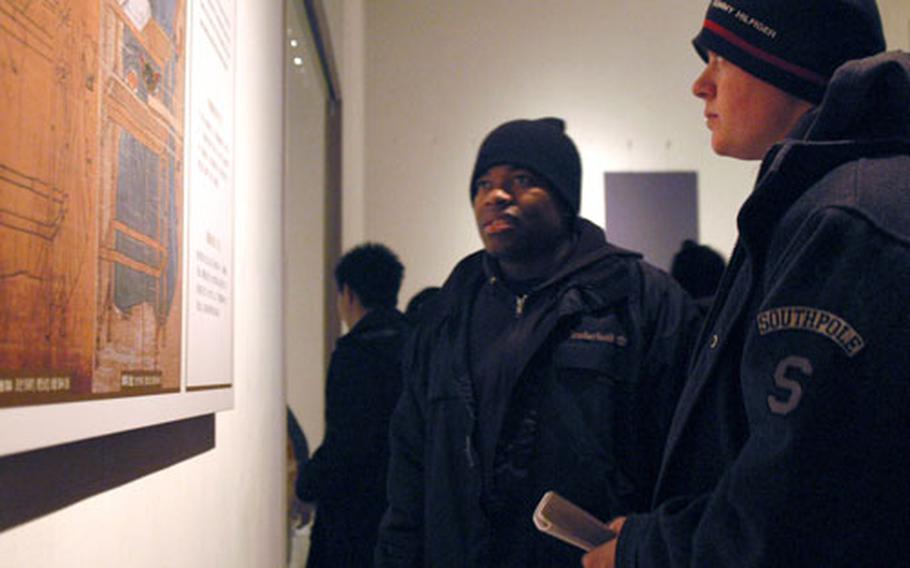 Pfc. Joseph Murphy, left, and Pfc. Josh Arthurs read Wednesday about how ancient Korean drawings were made during their visit to the National Museum of Korea. (Teri Weaver / S&S) 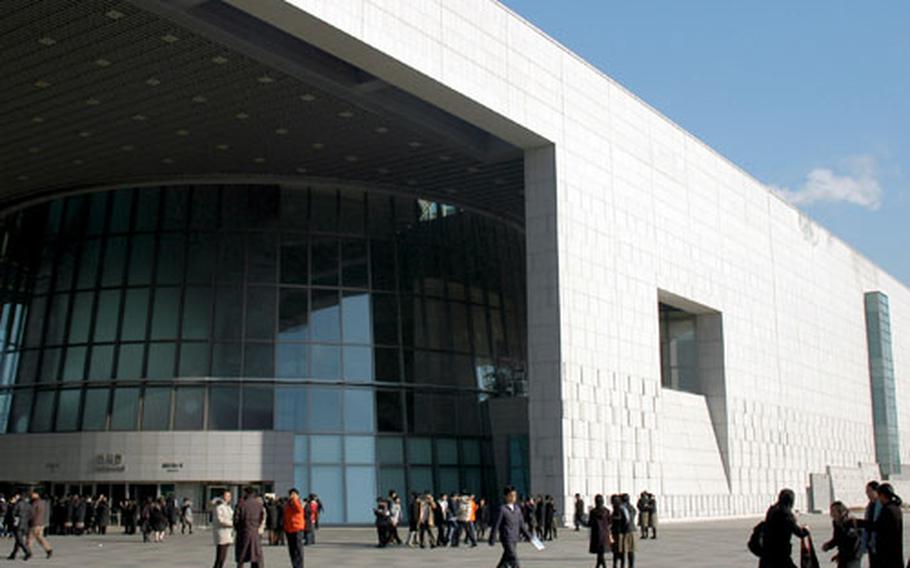 The National Museum opened in October and is located next to Yongsan Garrison in Seoul. (Teri Weaver / S&S)

SEOUL &#8212; Being a soldier means more than learning to maneuver the battlefield. It means learning how to adjust to a new culture, and even a new subway system, according to Staff Sgt. Jesse Crawford.

That&#8217;s why Crawford brought a group of U.S. soldiers from Tango Security Force at K-16 to Seoul last week to explore the city and the newly opened National Museum of Korea.

Crawford&#8217;s group of American and Korean soldiers weren&#8217;t the only troops touring the museum last Wednesday, one of the last days that admission to the museum was free. About 200 soldiers from Camp Hovey filled five buses Wednesday morning for a trip to the museum, which opened in October.

The museum, which Seoul City government calls the sixth largest in the world and the largest in Asia, includes collections dating back at least 10,000 years and has 11,000 items on display. The museum has displays explaining different art movements and techniques in Korea, as well as Korea&#8217;s Hangul alphabet.

&#8220;Americans, try not to stay with just Americans,&#8221; Crawford said before letting the 30 or so soldiers roam around the museum.

Pfc. Joseph Murphy, 22, of Jacksonville, Fla., and Pfc. Josh Arthurs, 20, of Appleton, Wis., wandered up to the third floor with a group of Korean soldiers from their unit. Murphy, who&#8217;s been in South Korea for nine months, said he likes the experience, though he&#8217;ll be glad to go back to the States.

&#8220;It helps if you have a Korean girlfriend,&#8221; Murphy said, laughing and showing off his gloves, a Christmas present.

It also helps if you are friendly. As Murphy and his friends wandered through the museum, they drew many stares from the hundreds of Korean students also viewing the collections.

When two girls began staring at Murphy, he waved and smiled. They waved back. Murphy crossed the room to shake their hands.

Other Korean soldiers said they liked the opportunity to see their national museum&#8217;s new building for the first time through the eyes of their American friends.

SEOUL &#8212; Military community members are invited to learn about their host country by visiting the National Museum of Korea, according to museum staff members.

Cho Ju-young, of the museum public relations team, said his Yongsan Garrison neighbors should feel free to visit the museum, which opened Oct. 28 after seven years of construction.

Those hoping for a close look at the museum&#8217;s national treasures should plan accordingly. Cho estimates that would take about 11 hours.

Beyond the ticket gates, the museum sprawls across the grounds, about 1,200 feet wide. The main exhibition halls are in the East Wing and other facilities are grouped in the West Wing. In the center is Bichu Hall with a 10-story pagoda, a monument to the &#8220;Bukwan&#8221; victory against the Japanese in 1708.

Korean Art Gallery: Calligraphy, lacquerware and the work of Kim Hong-do, an 18th-century artist who was the first to include common people in his work.

Restaurants: Plenty of drinks, snacks and meals are available in and outside of the museum.

9 a.m. to 6 p.m. Tuesdays through Fridays.9 a.m. to 7 p.m. Saturdays, Sundays and holidays.Closed every Monday.Admission