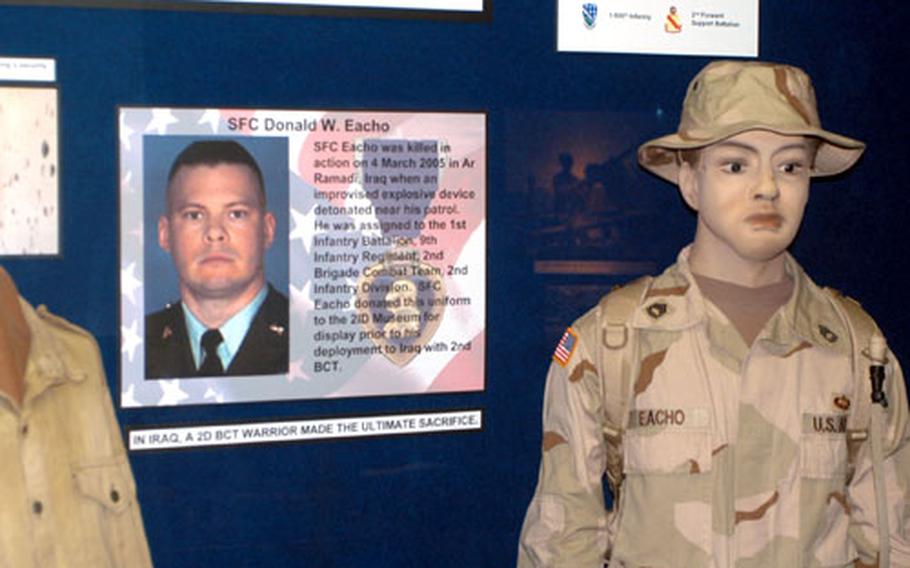 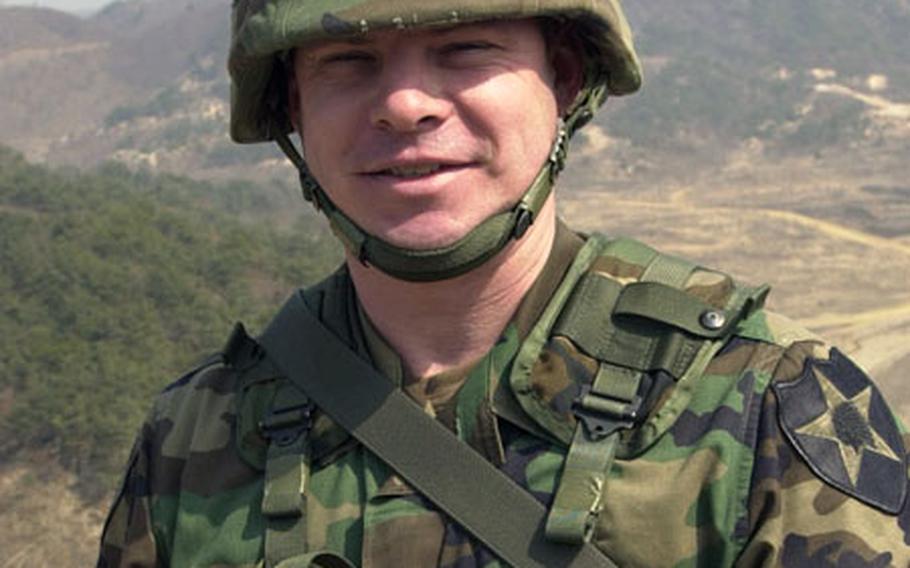 Sgt. 1st Class Donald Eacho, with the 1st Battalion, 9th Infantry Regiment, wears the Soldier’s Medal after a pinning ceremony in March 2004 during a break from gunnery training at Rodriguez Range in South Korea. Eacho helped save a 4-year-old girl and her grandfather trapped in a burning car in 2003 while he was on duty in Pennsylvania. (Juliana Gittler / S&S)

CAMP RED CLOUD, South Korea &#8212; The 2nd Infantry Division Museum has created a display to honor a soldier who donated his desert camouflage uniform to its collection before being killed in action in Iraq in March.

Before Strike Force deployed to Iraq in August, Eacho donated one of his DCUs to the museum, which was creating a display to commemorate the deployment, a museum official said.

In 2004, former 2nd ID commander Maj. Gen. John R. Wood presented Eacho with the Soldier&#8217;s Medal, one of the Army&#8217;s highest honors for heroism outside of combat, for his 2003 rescue of a 4-year-old girl and her grandfather trapped in a burning, overturned car on a Pennsylvania road. Pennsylvania Gov. Edward G. Rendell also awarded Eacho a state Cross of Valor.

When he received his Soldier&#8217;s Medal, Eacho told Stars and Stripes that helping to save the pair was important because he was wearing his Army uniform when he came upon the accident.

A museum official said Eacho&#8217;s DCU was part of a Strike Force display altered this week to include his biographical details.

Eacho&#8217;s citations, including his Soldier&#8217;s Medal, Purple Heart and any other awards he might gain, also will be added to the display, the official said.

&#8220;The uniform tells the story better than words can. He made the ultimate sacrifice,&#8221; the official said.

The museum&#8217;s collection includes the uniforms of soldiers who have died in each war in which 2nd ID has fought, the official said.

&#8220;It is very poignant that here is a guy who donated his uniform to the museum and he was killed just a few months later. Guys knew him and respected him and he was a leader,&#8221; the official said.

Eacho&#8217;s DCU eventually is to become part of a display, to be housed in the museum&#8217;s regimental room. &#8220;We are using him as a representative of all the soldiers who have given their lives for 2nd ID,&#8221; the official said.