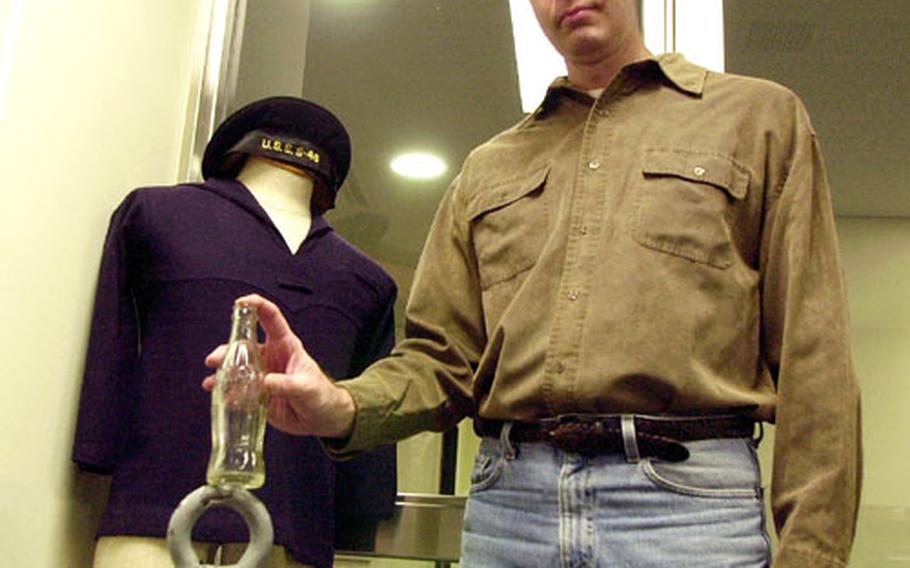 Phil Eakins, Sasebo Naval Base Museum curator and base historian, found the Coca Cola bottle he&#39;s holding, along with several others, hidden under floorboards in an old warehouse a few years ago. The bottle has no scratches or chips. Last year, while reading a World War II verteran&#39;s book, Eakins said, he realized why the bottles probably were hidden in the crawl spaces: Servicemembers may have been sneaking soft drinks and concealing the empties. (Greg Tyler / S&S)

Phil Eakins, Sasebo Naval Base Museum curator and base historian, found the Coca Cola bottle he&#39;s holding, along with several others, hidden under floorboards in an old warehouse a few years ago. The bottle has no scratches or chips. Last year, while reading a World War II verteran&#39;s book, Eakins said, he realized why the bottles probably were hidden in the crawl spaces: Servicemembers may have been sneaking soft drinks and concealing the empties. (Greg Tyler / S&S) 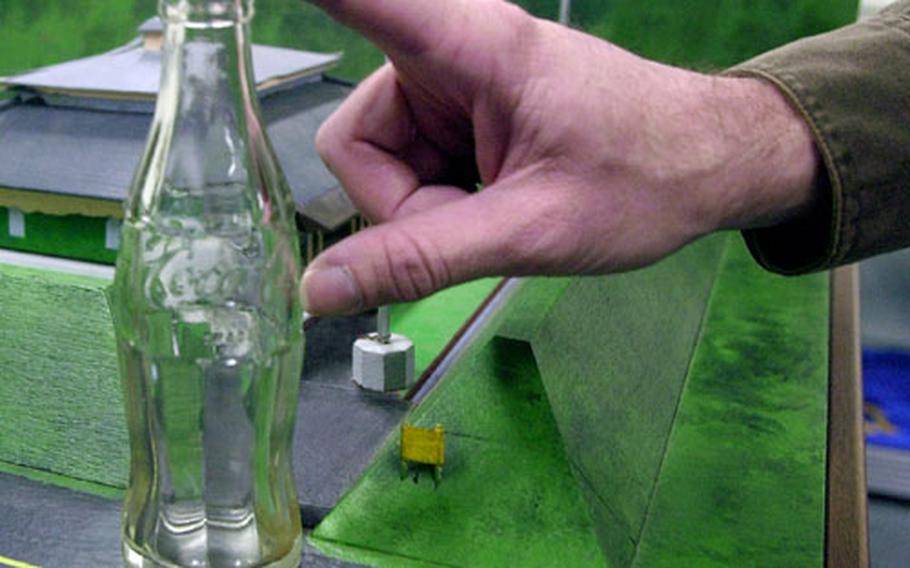 The Coca Cola bottle Phil Eakins found, with several others hidden under floorboards in an old warehouse at Sasebo Naval Base, is in such good condition it looks as though it could have been manufactured yesterday, rather than in the mid-1940s. This 8-ounce bottle is on exhibit at the Sasebo Naval Base Museum, next to the base library on the Community and Education Center ground floor. (Greg Tyler / S&S)

Whichever, it&#8217;s led the former petty officer and Navy journalist to a dogged, long-term pursuit of old stories, photos, statistics and relics from the base&#8217;s past &#8212; which in turn has given the Sasebo community a small but well-ordered, respectable museum in the Community and Education Center.

Eakins is the museum&#8217;s volunteer curator and has donated and loaned dozens of historical items from his considerable personal collection &#8212; including the Coke bottle.

Yes. Not just any Coke bottle, but a crystal-clear, sparkling, unscratched, unchipped eight-ounce bottle manufactured in February 1945. It recently was placed on exhibit in one of the museum&#8217;s glass cases, with other items related to the post-World War II American occupation of Japan.

The Navy Exchange Personalized Services Store formerly was in an old warehouse built when the Japanese Imperial Navy occupied the base. Officials decided to convert part of the warehouse into the current NEX Uniform Shop, recalled Eakins, a civilian contractor with the Navy&#8217;s Hazardous Materials Program.

During the conversion, contractors cut a hole in the floorboards. Unable to resist exploring the newly uncovered crawl space, Eakins slipped below the floor &#8212; and found the ground scattered with eight-ounce Coca-Cola bottles.

And, of course, he immediately wondered why the Coke bottles were hidden under the floor.

Still, Eakins broadcast an Internet request for information pertaining to Sasebo during the occupation.

&#8220;I received an e-mail from Ralph W. Willis, a former Marine who fought in World War II. Ralph mentioned that he&#8217;d written a book about his time in the Marine Corps and that he was in Sasebo during the occupation. I bought his book and while reading it, I realized my mystery was solved.&#8221;

According to the author of &#8220;My Life as a Jarhead,&#8221; self-published in 2000, the first shipment of supplies delivered to Sasebo after the base was surrendered in September 1945 included many cases of Coca-Cola.

Willis believes far too many cases were inadvertently shipped, so the massive load was moved to an open area downtown and guarded by Marines to prevent theft, Eakins explained. The plan was to distribute the Coca-Cola for sale to servicemembers.

In the book, Eakins noted, Willis claims the shipment of Coca-Cola included &#8220;what seemed like a few million cases&#8221; that Marines called the &#8220;Coke Dump&#8221; once it was all stacked in Yonka-cho, a sprawling open air shopping mall most Americans called The Ginza or The Arcade.

In June 1945, just three months earlier, 145 U.S. B-29 bombers had firebombed downtown Sasebo, killing at least 1,030 people, Eakins said. The base was not targeted, but the city was devastated. So, as the supplies and the gargantuan load of Coca-Cola arrived that September, the demoralized Japanese and the battle-weary Marines &#8212; newly arrived from their most recent mission as part of horrific fighting at Iwo Jima &#8212; had grown accustomed to life without such luxuries as the sweet caramel-colored sodas.

&#8220;As you might imagine, the wooden cases of Coke, piled high down where The Arcade is now, immediately were a highly valuable commodity,&#8221; Eakins said.

Eventually, during a terrible typhoon lashing Sasebo, Willis found himself assigned to guard duty at the Coke Dump.

&#8220;I did my best in those conditions to protect the valuable assets of the Coca-Cola Corporation of America,&#8221; Eakins said, reading aloud from Willis&#8217;s book, his voice inflection projecting a hint of sarcasm.

Nonetheless, Sasebo citizens, including a number of young women, soon were stopping by occasionally to offer Willis and the other Marines money for cases of Coke. He said they refused the funds, and told all who inquired to &#8220;hit the road.&#8221;

However, Eakins said, the former Marine sergeant admitted, &#8220; &#8216;There are today undoubtedly many old Japanese women in that part of Japan who have tucked away in closets or attics, one or two old wooden cases of Coca-Cola with empty bottles.&#8217;&#8221;

Willis&#8217; final recollection of the 1945 shrinking Coke Dump: His fellow Marines also most likely contributed to the soft drink&#8217;s disappearance, hiding their empties around the base.

Hiding places such as, just maybe, an old warehouse with a few loose floorboards?