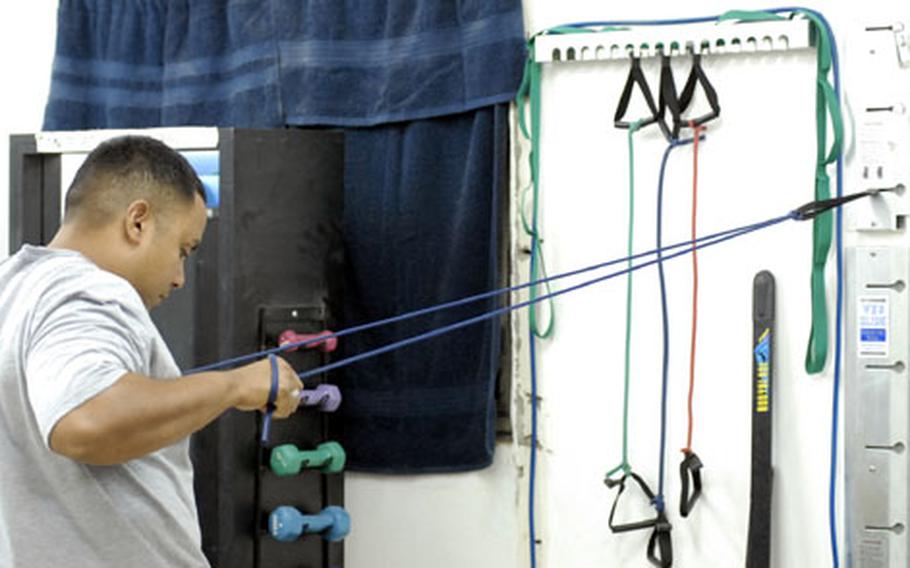 CAMP TAJI, Iraq &#8212; The main health clinic here is still seeing a steady flow of wounded soldiers, but virtually none of them are suffering combat injuries, according to medical officials.

"Most of what we&#8217;re seeing now is back pain and muscle injuries," said Capt. Yolonda Gray-Davis, supervisor for the 2nd Stryker Brigade Combat Team, 25th Infantry Division&#8217;s Brigade Support Battalion. "We&#8217;ve got a generally healthy population, but we still get that a lot."

The culprits, officials said, are wearing body armor improperly and poor weightlifting technique. While soldiers regularly do their dumbbell curls and runs, they don&#8217;t spend as much time strengthening their core and back muscles.

Camp Taji is one of a handful of bases in country with a fully staffed physical therapy clinic along with its other medical resources. Maj. Lisa Hirn, director of the support brigade&#8217;s physical therapy department, said she sees about 500 patients a month now, down from nearly 1,000 a month at the start of the year.

But while most of the earlier issues were twisted ankles and other field injuries, now she&#8217;s seeing mostly preventable problems.

"I&#8217;m just a few more injuries away from going over to the gym and shutting down the bench press," she said, laughing. "Guys will max out too often, or not use proper technique. So they keep us busy."

For the most extreme injuries, Hirn and Gray-Davis can order bed rest to heal strained muscles, but typically the treatment is some ice packs, stretching exercises and a stern warning from the medics.

"We don&#8217;t want to be evacuating people for back pain," Hirn said. "So you&#8217;ve got to figure out how the rein them in, get them back to work without letting them hurt themselves further."

That means making sure they wear body armor properly &#8212; all the weight shouldn&#8217;t be straining down on soldiers&#8217; shoulders, Hirn said &#8212; and limiting their time in the gym after an injury.

"I&#8217;ve put a cast on some patients when I thought a simple bandage wrap would do, because I knew it was the only way to slow them down," she said. "They want to get back out there as quickly as possible."