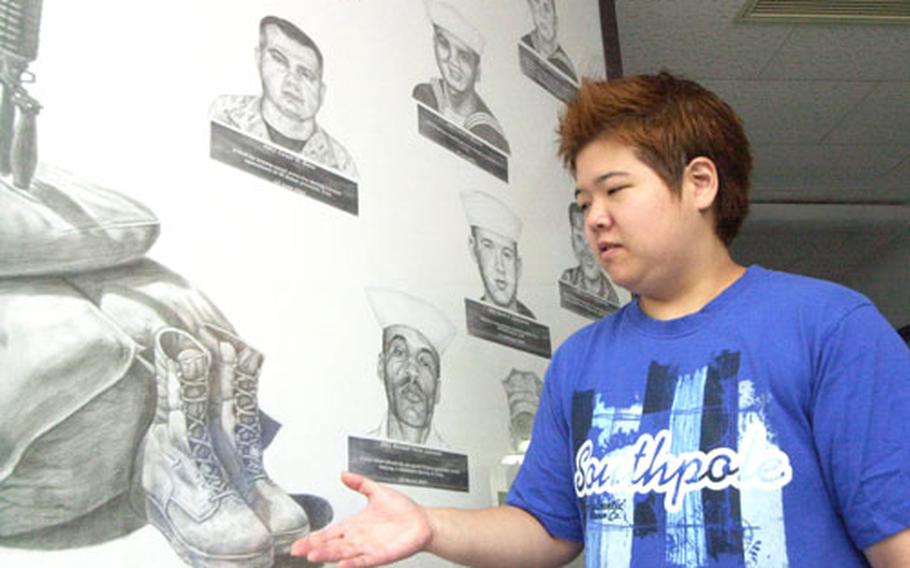 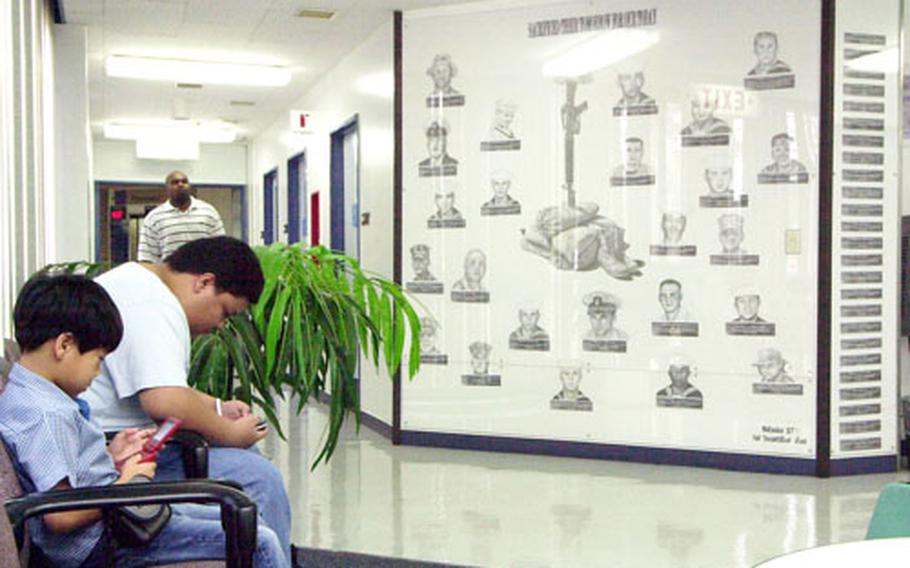 A mural dedicated to corpsmen who lost their lives in Operation Iraqi Freedom overlooks the waiting area outside the family practice at Yokosuka Naval Hospital. Petty Officer 3rd Class Youngran Jun, herself a corpsman, spent about a month and a half on the project, which includes sketches of 24 corpsmen as well as the names of 25 others listed to the right. (Tim Wightman/S&S)

Youngran Jun spends a good deal of her time listening.

A corpsman stationed at Yokosuka Naval Hospital, the petty officer third class spent a month and a half working on a mural that tends to make people stop and at times express their feelings.

In some cases, such as during her visit to the hospital on her day off Tuesday, Jun encounters people who knew one of the corpsmen she sketched on a white wall in pencil.

Jun, 23, relishes opportunities like these, when she gets to learn more about the corpsmen.

"Either they stand there not saying anything and then they talk to me, or they start crying," she said.

Her mural is a dedication to all the Navy corpsmen who have been killed during Operation Iraqi Freedom. The 24 sketched faces protected by plexiglass overlook the family practice area of the hospital. Names of 25 other corpsmen killed in the war are listed on the right side. In the middle of the mural is a drawing of the Sailor&#8217;s Cross, a memorial for sailors killed in combat consisting of a helmet, boots, sandbag and dogtags.

Though Jun said she hadn&#8217;t done much drawing since high school, her master chief asked her to do the mural after seeing her artwork displayed during a Christmas decorating contest last year.

Jun spent countless hours on the Internet researching the fallen corpsmen. Originally the work was to have color, but Jun said that "didn&#8217;t work out because everybody liked the gray and the white, so I just left it in pencil."

Miller said reactions to the Pensacola, Fla., native&#8217;s mural indicates that it was time well spent.

Though Jun doesn&#8217;t know any of the corpsmen she has drawn, Miller said she gets approached regularly by those who knew the fallen "and nods her head, and just shows the respect to the corpsmen on the wall as well as the person that wants to tell their story."

Miller said she and other hospital staff have sent pictures home of the mural, expanding its effect well outside of Yokosuka.

The mural has affected Jun, too. She says she is proud to be part of the mural; not just because she created it, "but because of what they did."