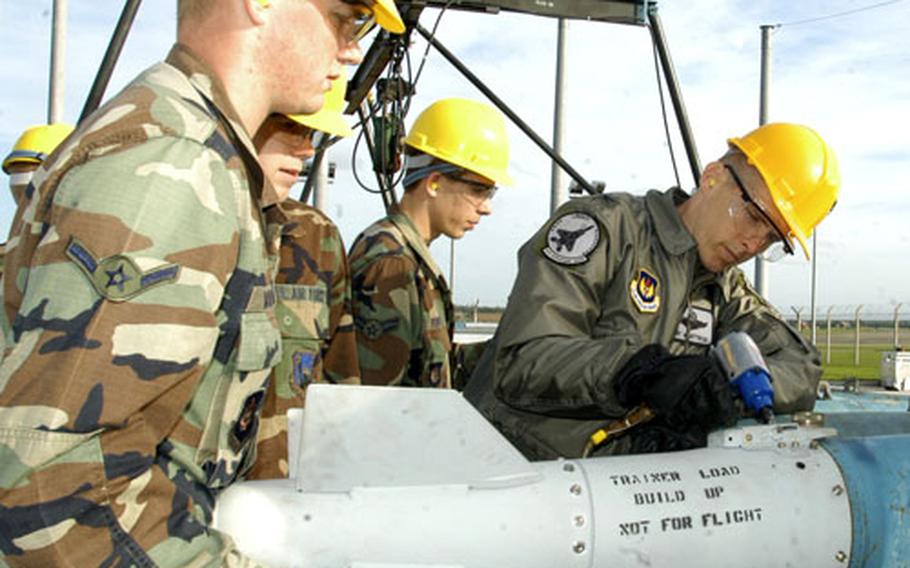 RAF LAKENHEATH, England &#8212; It sort of looked like an assembly line. But instead of assembling vehicles, they were assembling bombs weighing up to 1,000 pounds.

The nonmaintenance students were building dummy bombs, not the real thing.

Even though the munitions were not explosive, the students carefully attached the various components to each bomb&#8217;s foundation. The meticulous process took about 15 to 20 minutes for each bomb, depending on its size.

The one-day course is modeled after the Air Force Combat Ammunition Center Senior Officer Orientation Course, which is conducted at Beale Air Force Base, Calif.

The course, held once every quarter, was initiated last year to give leadership a glimpse into how munitions personnel deal with bombs on this base, home to the 48th Fighter Wing&#8217;s fleet of F-15 fighter jets.

&#8220;It gives us an appreciation of the amount of work that goes into building up these weapons,&#8221; said Col. Art McGettrick, 48th Operations Group commander.

Lakenheath&#8217;s course starts off in a classroom, where instructors identify equipment needed for munitions production, types of munitions, how munitions get to the base, the hazards involved and situational awareness.

Participants then use what they&#8217;ve learned to build the dummy bombs.

Cornell and other intelligence airmen, who conduct aircrew briefings and compile mission analysis as well as targeting information, agreed that the training was a good way to get out of their &#8220;vault&#8221; and see another perspective to the mission-planning process.