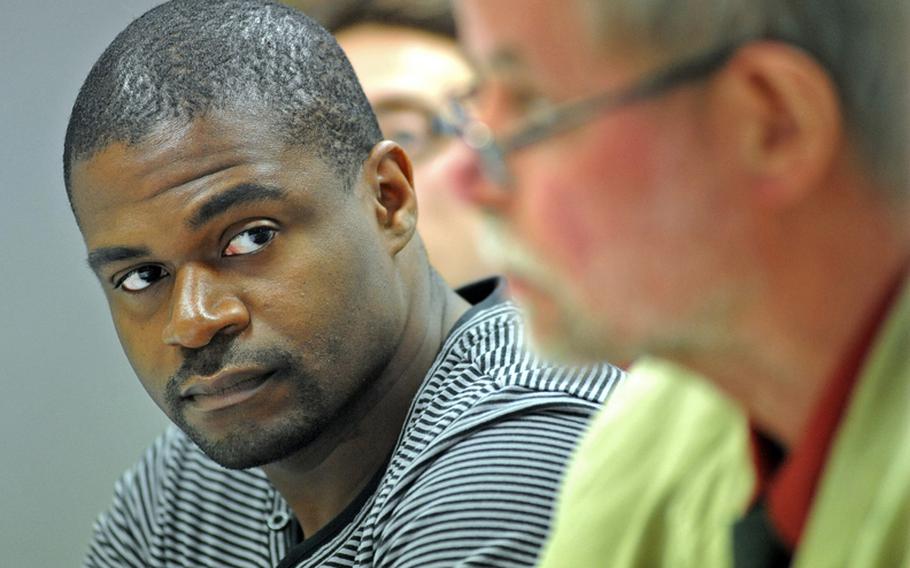 André L. Shepherd, who walked away from the U.S. Army, listens as his lawyer Reinhard Marx explains why he thinks that German officials were wrong to deny Shepherd's asylum request at a news conference in Frankfurt, in 2011. (Michael Abrams/Stars and Stripes)

GRAFENWÖHR, Germany — A central question in the German asylum case of a U.S. soldier who walked away from his helicopter unit in 2007 rather than deploy to Iraq may go before a European Union court, according to his lawyer.

Army Spc. André L. Shepherd still hopes to avoid military prosecution by convincing a judge that he had a well-founded fear of committing a war crime had he deployed with his unit in 2007 as a mechanic.

Germany rejected Shepherd’s petition for asylum in 2011. He is now appealing the decision at a Munich administrative court, which recently asked for clarification on a point of EU law from the Court of Justice of the European Union in Luxembourg.

At issue is the standard of proof behind an asylum claim by a foreign member of the military, according to Shepherd’s lawyer, Reinhard Marx, who requested the EU court be polled for a ruling. EU law permits asylum for foreign military members who face prosecution or persecution for refusing service that would include war crimes.

In the 2011 ruling, a judge concluded that the mere chance a person might be involved in a suspected war crime wasn’t enough to grant political asylum. Shepherd would have to prove that he himself “would take part in illegal acts.”

Marx said the standard of proof required by the ruling was too high. His client had a well-founded fear of participation, he said.

“The facts are clear,” Marx said. “The facts are, there have been war crimes in Iraq and that my client would not want to be involved in such war crimes.”

He said that from the initial petition claim, filed in 2008, Shepherd has pointed to a U.S. helicopter attack he says killed Iraqi civilians in Fallujah in 2004. Because Shepherd equipped and maintained those helicopters, he would have contributed to similar episodes, Marx said. The attorney was unable to provide a copy of the case before deadline.

The involvement of the EU court, if it agrees to hear the case, would likely delay the appeal by two years, Marx said. The Munich court will then resume its oversight. Representatives of all 27 EU members sit on the court, which ensures EU law is uniform across the courts of membership countries.

The Luxembourg court has never before interpreted the specific provision of asylum law under question, according to Ana López Fontal, a spokeswoman for the European Council on Refugees and Exiles, an alliance of organizations that assist refugee-seekers across Europe.

Shepherd, 35, was assigned to the 412th Aviation Support Battalion in Katterbach, in Bavaria, when he abruptly left on April 11, 2007. After holing up in a safe house in Bavaria for the duration of his unit’s 15-month deployment in Iraq, he emerged to officially file for asylum in November 2008.

U.S. Army Europe has previously said it still considers Shepherd a soldier, and it has limited comment on the case, as it did again on Friday.

“We don’t have anything new to say about it,” spokesman Bruce Anderson said.

Shepherd’s initial fears of arrest were allayed after the U.S. said it wanted German proceedings to move ahead, Marx said. Likewise, Shepherd is not at risk of being arrested by German police and handed over, Marx said, and would still not be arrested if the asylum case fails, as Shepherd has residency through marriage to a German.

“He can live here, he has permission,” Marx said. “That’s not the question. But he’s restricted in his freedom to move in Germany. He has no passport. And he wanted to be accepted as a refugee, because it’s his legitimate right. But we know that’s a very political question.”

Shepherd, who could not be reached before deadline for this report, frequently cited what he deemed the political nature of his case — Germany opposed the war, as did most Germans — and he spoke stridently about his opposition to the conflict when filing his petition in 2008. He chose not to become a conscientious objector because his issue was with the Iraq war alone, not all wars, he said.

“This is not against the U.S. military,” he told Stars and Stripes at the time. “My problem is with Washington. The U.S. military has been manipulated. They were lied to.”

He had previously deployed to Iraq in 2004 as part of a six-month tour that placed him on a forward operating base near Tikrit.

The political temperature around the conflict was already changing when he filed the petition for asylum. Only days earlier, the U.S. had elected as its president a vocal critic of the war. The U.S. military would pull out of the conflict altogether in 2011.

Time leaves Shepherd no less determined, his lawyer said. Marx hopes a positive ruling from the EU court will help win the appeal in Munich, giving his client asylum.

“We hope that then the case is final,” Marx said.