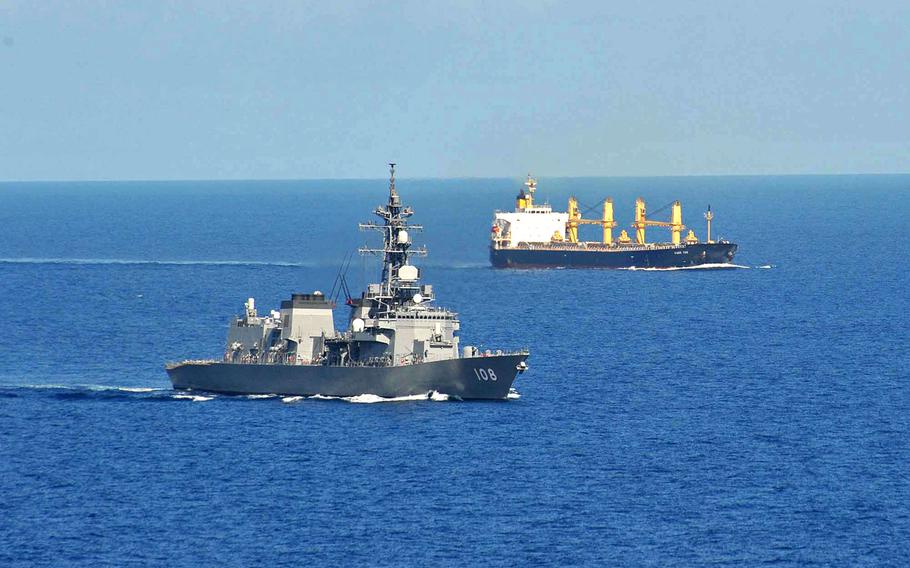 The Japanese destroyer JMSDF Akebono operates in the Gulf of Aden during the Three Arrows exercise, which began May 1, 2018. (Courtesy of Japan Self-Defense Forces, Ministry of Defense)

MANAMA, Bahrain — Operation Three Arrows, a counterpiracy exercise that brought together warships and patrol aircraft from the United States and six other nations, has concluded in the Gulf of Aden after 12 days of naval drills.

The U.S.-led Combined Maritime Forces, based in Bahrain, combined with the European Union Naval Force to coordinate the event, which began May 1.

Warships from Japan, Spain and Italy and maritime aircraft from Germany, Spain, Japan and the United Kingdom practiced interacting with fishing vessels and dhows in the region. The small Djiboutian navy also assisted by informing local vessels of the warships in the region and collecting information on suspicious activity.

The CMF forces handed out water and first-aid kits to the fishermen. This engagement is designed to build communication with the community and help CMF “gain valuable knowledge about local maritime activity (and) identify suspicious activity early,” Rear Adm. Daisuke Kajimoto, commander of Combined Task Force 151, said in a statement.

As one of three commands that fall under the U.S.-led combined force, CTF 151 patrols parts of the Indian Ocean, Gulf of Aden and the eastern coast of Somalia performing counterpiracy operations and engaging with regional partners to protect shipping lanes.

Piracy in the Gulf of Aden has significantly declined since the launch of the EU’s Operation Atalanta and the formation of CTF 151 in 2009, Navy officials said.

There were more than 45 attacks by Somali pirates in the Gulf of Aden and surrounding waters in 2011. So far this year, only one attack was reported off the coast of Somalia. In February, a Singapore-flagged tanker was fired upon by three skiffs about 160 nautical miles off the Somali coast. After the onboard security team fired back, the pirates retreated.

“We’ve been doing this together for many years and we are comfortable partners. Our recent work together is part of the ongoing commitment to the region to address piracy and wider maritime security issues.”