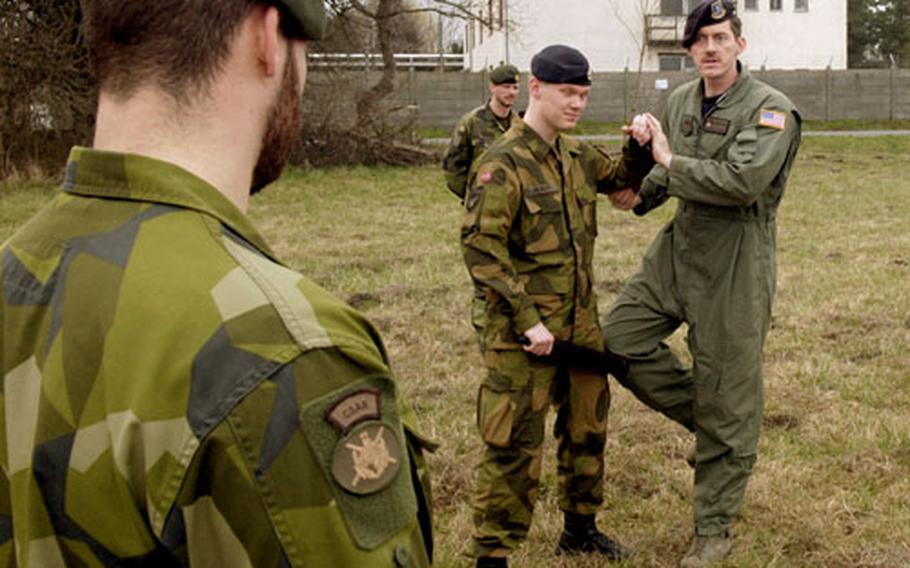 Master Sgt. Frank Prebble gives instruction to Swedish and Norwegian members of the Heavy Airlift Wing’s Raven Team. The Ravens are the security element for the C-17 crew, securing the areas around the plane upon landing. Most of the training, however, focuses on communication skills and using “verbal judo” to resolve disputes that may occur in potentially hostile places. (John Vandiver / S&S)

Master Sgt. Frank Prebble gives instruction to Swedish and Norwegian members of the Heavy Airlift Wing’s Raven Team. The Ravens are the security element for the C-17 crew, securing the areas around the plane upon landing. Most of the training, however, focuses on communication skills and using “verbal judo” to resolve disputes that may occur in potentially hostile places. (John Vandiver / S&S) 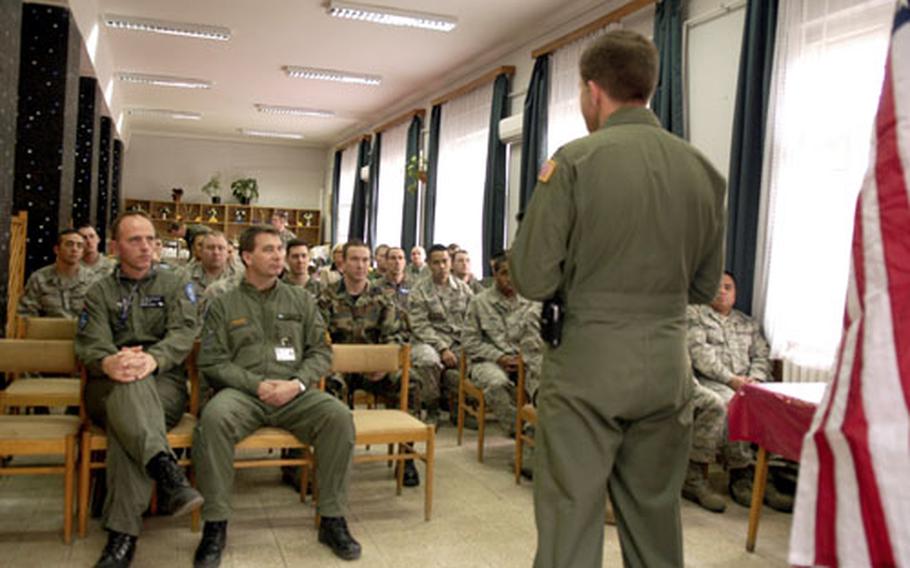 U.S. Air Force Col. John Zazworsky, the commander of the Heavy Airlift Wing, addresses some of his troops, which are a mix of Norwegian, Swedes, Hungarians and others. An American was designated to command the multinational group because the U.S. is the only nation with C-17 flying experience. However, the leadership position will rotate among members as the other countries gain flying experience. (John Vandiver / S&S)

PAPA, Hungary &#8212; When the small advance team arrived in this remote little town in western Hungary in October, faced with the daunting task of building a multinational C-17 airlift wing from scratch in less than a year&#8217;s time, everything was in short supply.

There weren&#8217;t enough phone lines, computers or office furniture. Team members often had to work out of hotel rooms, an odd place for crafting strategies to get aircrews into hot spots around the globe.

Now, the 12-nation Strategic Airlift Capability project is zeroing in on its first mission later this summer, and things are starting to fall into place. About 100 personnel are on the ground at Papa Air Base and more are on the way.

The HAW will be flying three C-17s out of Papa, carrying cargo in support of NATO operations in Afghanistan and numerous other European Union and United Nations efforts. The first C-17 is to arrive in late July and the remaining two later this year.

The wing, which formed in October after two years of negotiations between the nations involved, is expected to log 3,500 hours of flight time per year once it is fully operational.

At $250 million per plane, the C-17 Globemaster III isn&#8217;t cheap, making cost-sharing consortiums like the SAC an attractive option for countries with limited resources.

The question that remains is whether a multinational group sharing ownership, pilots and crews can work as one. Can the needs of small countries and larger ones be balanced or will countries like the U.S. come to dominate such organizations?

The Strategic Airlift Capability project will be the proving ground for the concept.

"There&#8217;s nothing else like this. The challenge now is to prove to the nations that we can perform. There are a lot of expectations," said Col. Fredrik Heden, the HAW&#8217;s vice commander from Sweden.

The organization is the first of its kind, operating independently of NATO or any individual country. The HAW answers to a 12-member steering board comprising representatives from each participating country who share equal voting power.

Zazworsky said the key to making the project work is planning missions far in advance and setting policies that balance the needs of the members.

"We hope to be flexible enough to respond to short-notice needs, but we&#8217;re hoping the first year or two is predictable and routine," Zazworsky said. "It really comes down to nations identifying (missions) and getting it on schedule as soon as possible. It will be in everyone&#8217;s interest to plan ahead and look for ways to share."

Supporting the war in Afghanistan will likely be a major focus for many of the countries, including Sweden and Norway, the wing&#8217;s largest contributors after the U.S.

It isn&#8217;t clear how the U.S. will use the aircraft. However, since the military already is heavily focused on providing airlift support to areas such as Afghanistan and Iraq, the multinational wing could provide an opportunity to support other U.S. military missions around the world.

One such area is Africa, where the U.S. is involved in a growing number of military training initiatives covering a vast amount of territory.

"There&#8217;s been a long-standing desire to engage more directly with Africa and you see that with the stand-up of AFRICOM," Zazworsky said, referring to the Stuttgart, Germany-based U.S. Africa Command. "Certainly, with the operational distances we can cover unrefueled, we can service most of Africa from [Papa]."

Providing logistical support in the U.S. European Command area of operation also would be a natural fit for U.S. missions, Zazworsky said.

While the steering board serves as the higher headquarters for the wing, mission decisions ultimately rest with the wing commander, a position that rotates among the members.

Inevitably, there will be circumstances when nations are competing for the same time slots. In the event of a conflict, factors that override flight hours will include whether a nation&#8217;s citizens are under immediate threat, a natural disaster has occurred or support for combat operations is required.

"The very last thing is the country with the most amount of hours," Zazworsky said. "The overarching theme is collaboration."

Because the U.S. is the only nation with C-17 flying experience, U.S. Air Force pilots will take the lead on the initial missions.

However, pilots from other countries are now being trained at U.S. flight schools. They then will be eligible to fly U.S. missions and missions for their own countries. There could even be cases in which a U.S. mission is flown without a single American on board.

In the meantime, planning missions in advance is going to be the key to avoiding conflicts about flight times, commanders say.

"We need to get all the nations talking to each other," said Lt. Col. Tom-Ivar Punsvik, a Norwegian who serves as the wing&#8217;s planning chief.

One strategy to maximize the number of missions is for countries to bundle cargo together to burn flight hours at a slower rate by sharing the load.

"It&#8217;s a new way of thinking. People are going to need to talk to their neighbors," Punsvik said.