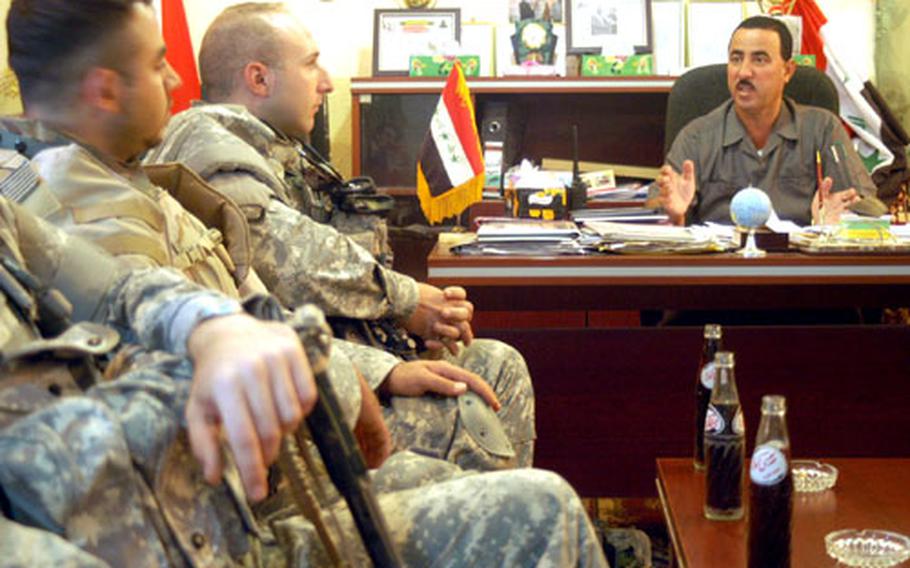 Abdul Kareem Ali, right, mayor and overall town manager of Multaka who is also known as Abu Saif, talks with members of Company D from the 2nd Battalion, 27th Infantry Regiment based at Forward Operating Base McHenry in a weekly meeting. (Ben Murray / S&S)

As the mayor of Multaka, a medium-size town just west of Kirkuk in north central Iraq, Abdul Kareem Ali, known as Abu Saif, is more than just a civic leader, he is a man on whom the community centers and whose word acts like local law.

Sitting behind a big wooden desk in a large and well-furnished room, he has a grave, measured countenance. He smiles little, speaks directly and has a general air of confidence and importance.

The metaphor applies in many ways. Aside from his obvious status, Saif is meticulously dressed and spares no expense to treat his visitors well, insisting that they eat a meal at his office and take home boxes of sweets.

He has a personal assistant who attends to his needs and, stationed outside, a local city police force called the &#8220;Night Guard&#8221; that exists independently of Iraqi security forces &#8212; which he says he does not trust.

At one point in a meeting Tuesday with members of Company D, he says through a translator he has names of corrupt members of the Iraqi army he wants to &#8220;erase,&#8221; and accuses them of deliberately attempting to incite division between local residents and the city council.

But whatever grievances with local police and army officials, Saif is a linchpin of stability of Multaka, a bastion of peace in the troubled region around Kirkuk.

Soldiers say there hasn&#8217;t been an attack against coalition forces in the town for months, though roads outside the city &#8212; outside of Saif&#8217;s control &#8212; have been strung with improvised bombs in the past.

A former Iraqi military member himself, Saif earned his wealth trading on the black market under Saddam Hussein and turned that prosperity into political influence after the invasion of the country, said Capt. Roland Keller, Company D commander.

These days, Saif is thought to broker peace in part by operating under a mutual nonharassment agreement with insurgents moving around the region, Behm said. As long as would-be insurgents don&#8217;t cause trouble in Multaka, they can pass by unmolested, military members suspect.

But Saif also knows how to work well with U.S. forces and take advantage of the money the American military makes available for civic improvements, which reap benefits for the local citizens.

The two sides are currently working on a deal to improve roads in the area, and Multaka has other amenities, such as its own radio station.

The end result is a flourishing, multi-ethnic town that is both friendly to U.S. forces and able to effectively take care of itself &#8212; an anomalous ability in the strife-ridden region.