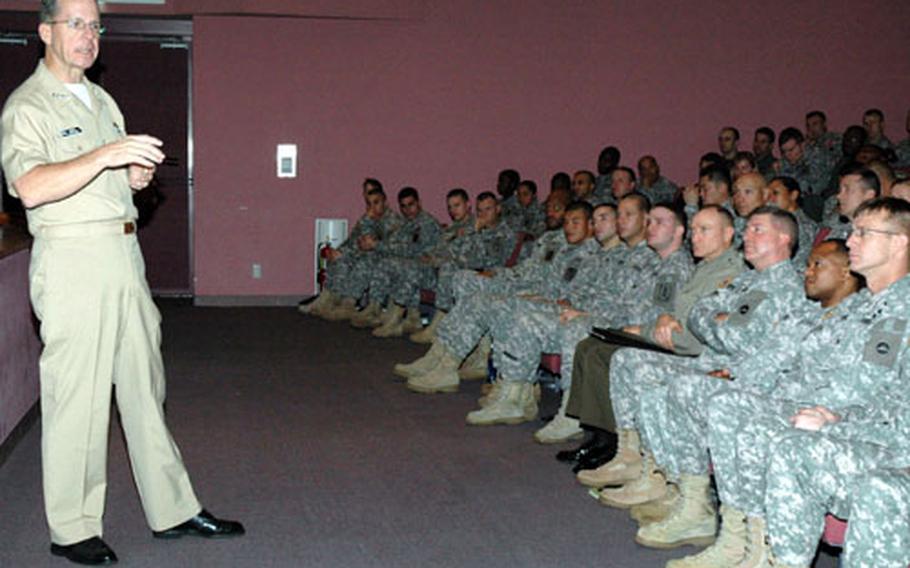 CAMP ZAMA, Japan &#8212; Fifteen-month-long U.S. Army deployments to Iraq and Afghanistan are taking their toll on soldiers and their families, the military&#8217;s top officer told a group of about 150 soldiers Thursday afternoon.

Mullen said he is working with Army leadership to shorten the deployments, which were increased from 12 to 15 months in April.

&#8220;They are really tired,&#8221; he said of soldiers he met with recently in Iraq during their 14th consecutive month at war.

On Thursday, Mullen also had a private lunch with a group of Army captains at Zama. He said those officers, too, talked about the stress of deployments and the anxiety of waiting for new orders in the face of an overseas family move and an upcoming assignment at war.

&#8220;They are looking for ways to stay&#8221; in the military, he said, adding that he plans to take their concerns back to Army leadership in Washington.

During the town-hall meeting, Mullen talked with the gathering about military contractors, longer military careers and caring for wounded servicemembers returning from war.

&#8220;The challenge we have in the Army is the scope of the problem,&#8221; Mullen said about adequately treating wounded soldiers and Marines.

Mullen pointed to the Army&#8217;s new Warrior Transition Units, commands created this summer that mean to consolidate certain medical and veteran services and provide a more streamlined bureaucracy for servicemembers and their families. He said the Marine Corps has set up similar programs.

But Mullen also noted the challenges of treating thousands and thousands of wounded remain.

In September, a Congressional report found that of the 32 units, more than half have 50 percent staff vacancy rates. Army officials have said the units should be fully staffed by January, according to a report in the Washington Post.

On Thursday, Sgt. Kenneth Haner, an Army logistics specialist, raised a concern that military contractors may be narrowing soldiers&#8217; promotion options for certain jobs. Mullen said it&#8217;s an area he wants to study more, and he promised Haner a more detailed answer through e-mail.

While in Japan, Mullen had plans to meet with officials at the Ministry of Defense. He said it was possible they would discuss the expiration of a Japanese refueling mission in the Indian Ocean.

The mission, which started in 2001, refuels U.S. and other Coalition warships. It expired last month after opposing political parties in the Japanese Diet failed to reach an agreement on the measure.