Mullen: U.S. Troops in South Korea could deploy to Mideast 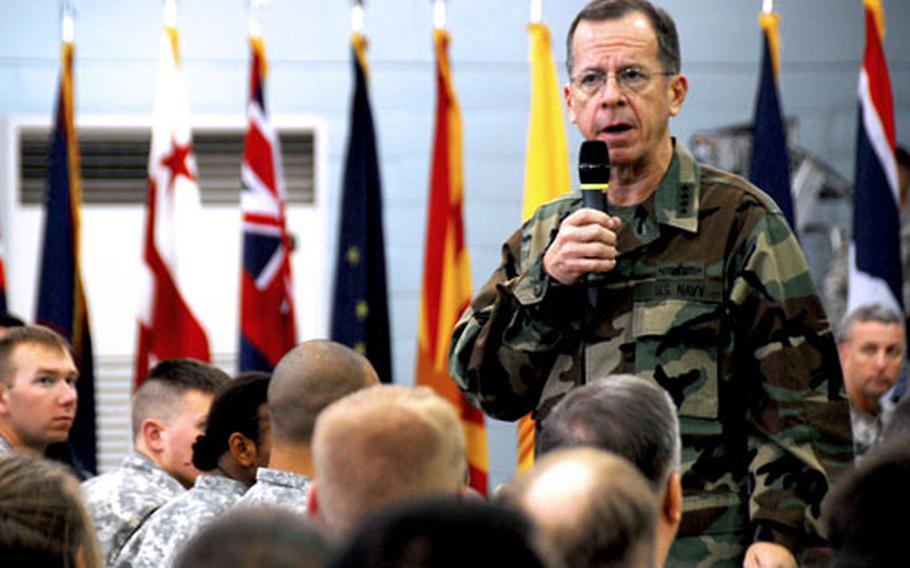 SEOUL &#8212; The United States&#8217; top military officer said Thursday that the Pentagon is discussing whether troops will deploy from South Korea to the Middle East in coming years, as more servicemembers are stationed in the Asian nation on longer tours with their families.

"That&#8217;s something we&#8217;re looking very specifically at," Adm. Mike Mullen, chairman of the Joint Chiefs of Staff, told several hundred troops in a town hall-style meeting in Seoul. "We really haven&#8217;t closed on whether it&#8217;s going to be one way or the other."

Troops have traditionally been deployed to South Korea on one-year tours. But under a tour normalization policy announced late last year, about 14,000 &#8212; roughly half the U.S. troop strength here &#8212; will eventually be stationed with their families on two- and three-year tours.

Mullen said that policy will be fully implemented in about seven to nine years, when there are enough schools, housing and other infrastructure to handle the extra families.

Mullen, in Seoul for annual security meetings with U.S. and South Korean officials, said troops are needed in South Korea as a deterrent against communist North Korea, which conducted its second nuclear test in the spring and has since launched numerous missiles, including five short-range missiles last week.

He also addressed what has been a concern for many South Koreans who worry about their vulnerability to North Korea: that the U.S. would pull some of its 28,500 troops out of the country and send them to Iraq or Afghanistan.

"The concern that gets raised with respect to rotating forces out of here is that it lessens the commitment to the [U.S.-South Korean] alliance and the Republic of Korea, and nothing could be further from the truth," he said.