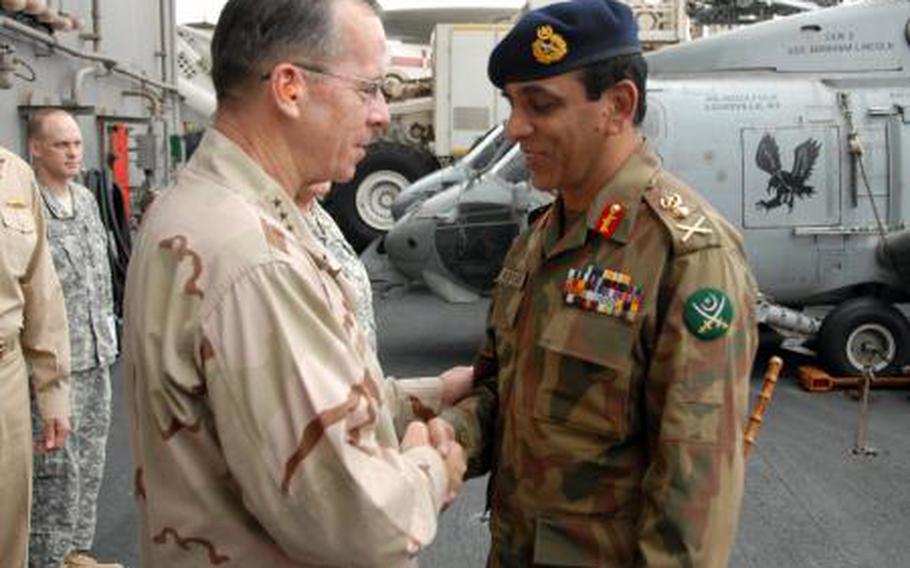 In likely his final appearance before Congress before retiring next week, Mullen delivered an unusually stinging criticism of the government of Pakistan. The U.S. had evidence, he said, that Pakistan supported the massive truck bomb that injured 80 U.S. troops at Combat Outpost Sayed Abad on Sept. 10, as well as last week&rsquo;s attack on the U.S. Embassy in Kabul, a brazen assault on a Kabul hotel in June and several smaller operations.

&ldquo;The Haqqani Network, for one, acts as a veritable arm of Pakistan&rsquo;s Inter-Services Intelligence Agency,&rdquo; Mullen told the Senate Armed Services Committee on Thursday.While U.S. officials have long said they were concerned about lingering ties between the ISI and the Haqqanis, Mullen never has so bluntly connected the government to attacks on U.S. forces.

Mullen blasted Pakistan&rsquo;s government for &ldquo;choosing to use violent extremism as an instrument of policy&rdquo; and jeopardizing its strategic partnership with the U.S.

&ldquo;They may believe that by using these proxies they are hedging their bets, or redressing what they feel is an imbalance of regional power,&rdquo; he said. &ldquo;But in reality, they have already lost that bet.&rdquo;

The testimony is a capstone to Mullen&rsquo;s four year chairmanship, during which he has made two dozen visits to Pakistan in an effort to rebuild military-to-military relations. That effort has come under increasing criticism in the U.S. given Islamabad&rsquo;s continued unwillingness to fight extremists in the border regions neighboring Afghanistan at a level adequate to American officials.

By now, nearly every U.S. security leader has said the war in Afghanistan cannot be won without success against terrorist and safe havens across the border in Pakistan. But the U.S. has grown increasingly impatient. In July, the U.S. responded to Pakistani criticism of the raid to kill Osama bin Laden by suspending $800 million in aid, over the objections of some defense officials.

Defense Secretary Leon Panetta on Thursday repeated his vow to protect U.S. troops against Haqqani attacks, but refused to reveal to the panel what types operations the U.S. would employ and said he has not told Pakistani officials what the U.S. would do should their inaction continue.

&ldquo;I haven&rsquo;t spelled that out for them, but I would be very surprised if they were surprised by what we did to fulfill that commitment.&rdquo;Sen. John McCain, R-Ariz., ranking member on the committee, warned that additional cuts to Pakistan&rsquo;s aid &ndash; which he did not support &ndash; could come if the Defense Department doesn&rsquo;t do more to make its case on Capitol Hill.

&ldquo;I think you&rsquo;re going to have a real uphill battle here in convincing the Congress to maintain a level of funding and assistance to Pakistan unless there is some change,&rdquo; McCain said.