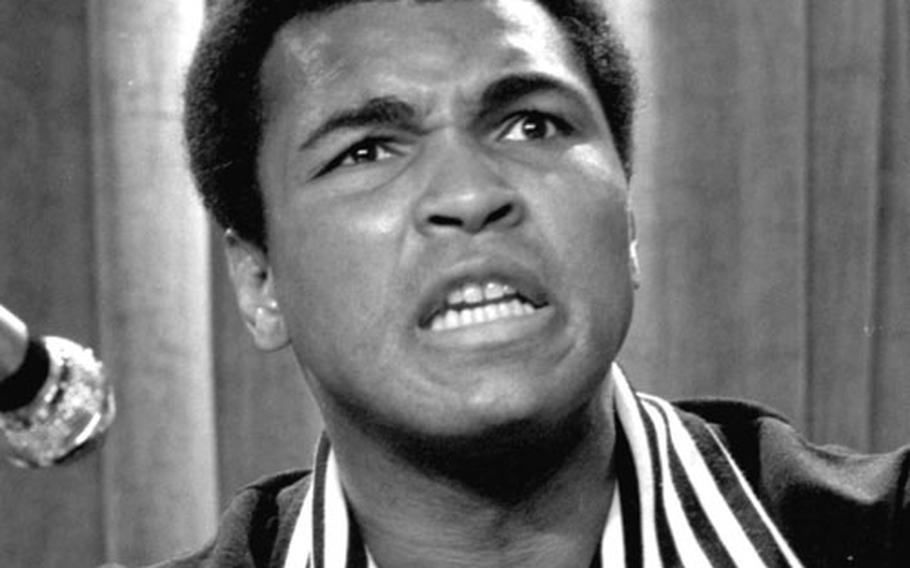 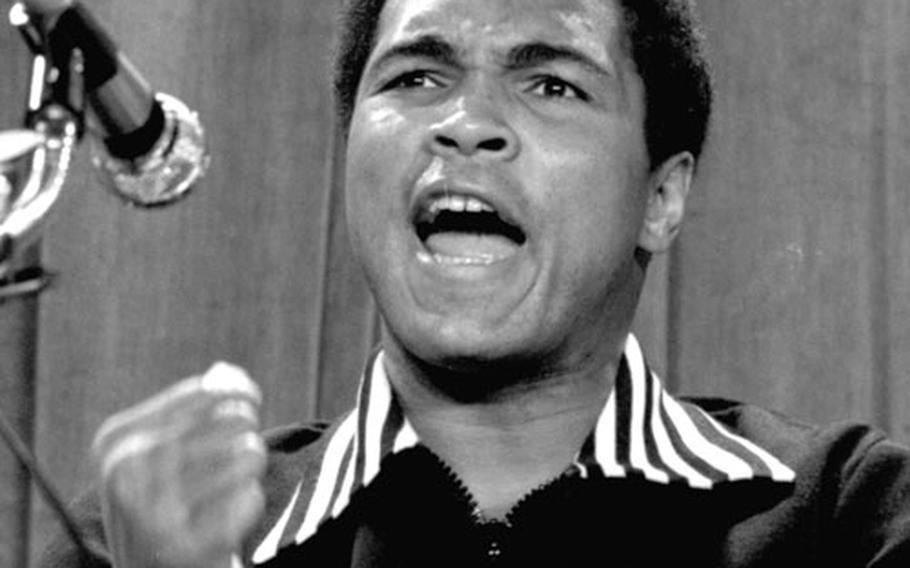 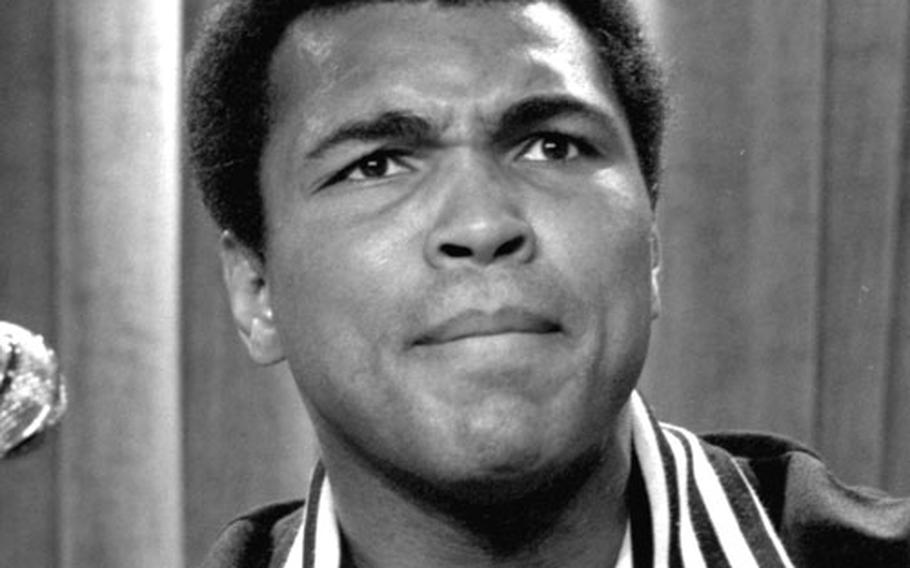 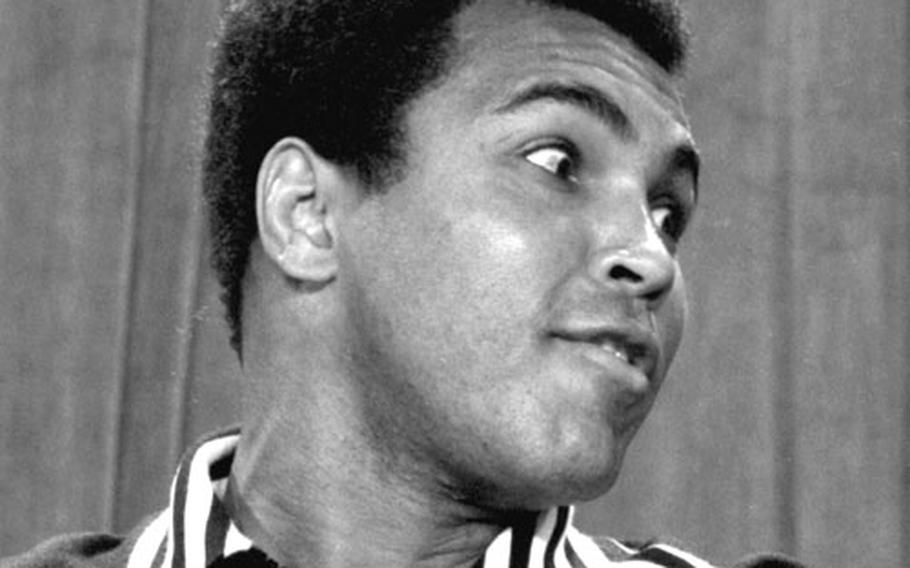 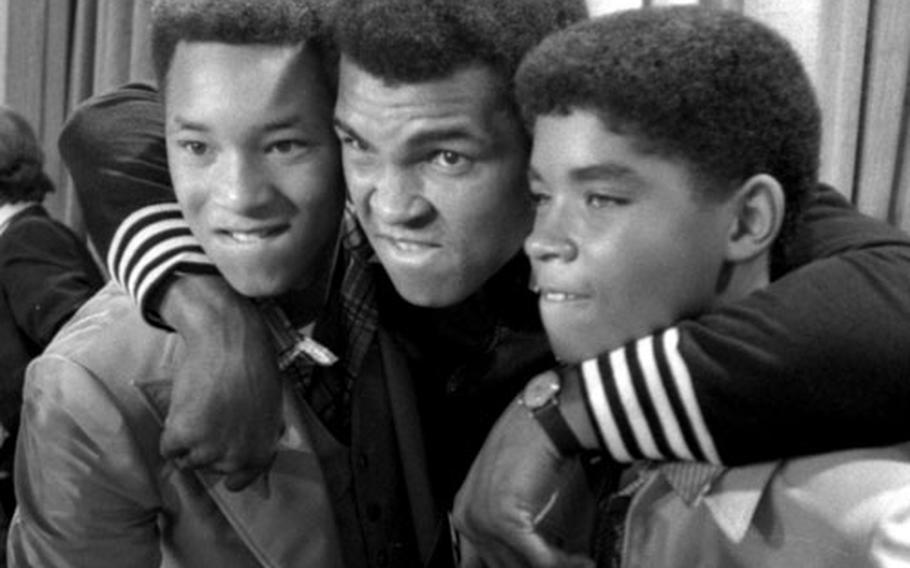 Buy Photo
Muhammad Ali poses with Phillip McAllister, bottom photo left, and James Leroy Smith, who play him in his younger days in ''The Greatest.'' (Red Grandy /©Stars and Stripes)

THERE'S no doubt who's the star of The Greatest. The film, now in production, is the life story of Muhammad Ali, once known as Cassius Clay.

The world heavyweight champion, whose announced retirement from boxing is always subject to change since he has changed his mind before, has launched a new career as a movie actor. And take it from those who know &mdash; portraying himself, Ali will be "The Greatest" when he makes his film debut next year.

Ali, who relishes his give-and-take with the news media, proved as skilled and amusing a promoter of his own movie and fledgling career as an actor as he has been of his fights.

"People are gonna be shocked to see such great actors here doing the story of a man who is not yet 35 years old," said Ali in his familiar pitchman's tones at a New York press conference.

"I predict this is going to be the greatest movie of all time. After all, I am the most famous person in the world.

"Boxing was small time; I'm graduating to bigger things. I'm not only the greatest fighter, but I'm gonna be the greatest actor of all time. I'm gonna win every award there is &mdash; Academy and whatever else there is. I'm gonna make a whole bunch of great movies. I'm the only man who can make a movie everyone in the world can identify with &mdash; Jews, Christians, Muslims, Arabs, Indians, everyone."

Costarring in The Greatest, a Columbia Pictures release, are Ernest Borgnine, James Earl Jones, Robert Wagner, John Marley and Robert Duvall. It's being directed by Tom Gries from a screenplay by Ring Lardner Jr., based on the book, I'm The Greatest &mdash; My Own Story, by Ali with Richard Durham.

Gries, who has won a couple of Emmys for television productions, said that in the first scenes, "Ali was low key &mdash; Ali as we know him. He was doing what I was looking for him to do not to act, but to do simply as Ali would do.

"He has tremendous potential. He did some technical things I would expect from an actor with 10 or 15 years experience and that some never do. Borgnine (portraying Ali's trainer and confidante, Angelo Dundee) missed a line and Ali picked up on the scene. His instincts are pure and good."

"I knew when I decided to produce this picture, I was taking a calculated gamble. The man had never acted before. But when he finished his first scene, the entire company applauded. I would say he's going to turn out to be an actor of some semblance, and, of course, he is incredibly photogenic."

Jones, who starred in the boxing movie, The Great White Hope, and plays Malcolm X in The Greatest, commented:

"If anything, I've learned from him. I've always felt he was one of the greatest performers in the world. It's a pleasant shock to find out how good an actor he is."

Marshall said, "Ali has an absolutely uncanny knack of avoiding mistakes and editing himself."

"I don't expect him to say the lines exactly as they are written," added Gries. "He comes close enough and the things he has to say frequently are better because it comes from his heart."

"He brings in much more to it than that," said Jones. "When he ad-libs, it's right from his experiences."

Borgnine put it this way: "For his own life, who could play it better?"

"The theme of the film is simple," says Gries. "Here is a man who listened to himself. If you stand by your beliefs and principles everything else will take care of itself."

Script writer Lardner says he studied tapes of Ali, then wrote dialogue to match. It's expected that Ali will improvise heavily, Lardner explains, but if there's too much spontaneity "that could affect and change other scenes ... that's why I'm here on the set."

Portraying Ali as a young man in The Greatest are Phillip ("Chip") McCallister, 19, of Los Angeles, and James Leroy Smith, 13, of Buena Park, Calif. They are being coached for their boxing scenes by Hedgmon Lewis, former world-ranked welterweight boxer.

McAllister, whose main interests have been sports and acting, plays Ali in the pivotal period of his boxing career. At 6-foot-1 and 185 pounds, Chip is an Ali look-alike and plays the champ in the period when Ali engaged in more than 100 amateur bouts before turning professional and winning the heavyweight title from Sonny Liston in 1964 at the age of 22.

A former varsity swimmer and football player at Dorsey High School in Los Angeles, McAllister wrote the casting director that he was "crazy about the man" (Ali), that he imitated him frequently, that he was "born to talk" (like Ali) and that he always had wanted to "mix sports and acting."

Smith, who bears a remarkable similarity to Ali as a boy, was chosen for the role over 200 aspirants after a nationwide search. The film role will be his professional acting debut.

A former student at Our Savior Christian School in Philadelphia, the town where he was born, Smith now attends McComber Junior High in Buena Park, where he is active in sports.

It was the day before his disputed 15-round decision over challenger Ken Norton that Ali introduced Chip and James Leroy at a crowded press conference called by Columbia Pictures in New York.

"I shouldn't be here now, I should be getting ready for tomorrow night," Ali told reporters. "But I came here for these two young fellows (putting an arm around their shoulders)."

And then the champ proceeded to take on the newspaper and television-radio media in his usual talkative fashion &mdash; and considerable leg-pulling.

"I must be a pretty good actor, if you believe all the things I been saying I'm gonna do to Norton."

At one point, he really put on everyone with this bit:

"I have a very good friend here today I'd like you all to meet. A great entertainer &mdash; Elvis Presley," he said, pointing towards the rear of the jam-packed room.

As everyone strained to catch a glimpse of Elvis, Ali called out "April Fool!" and added with a laugh, "How's that for acting?"

Well, moviegoers will soon find out.