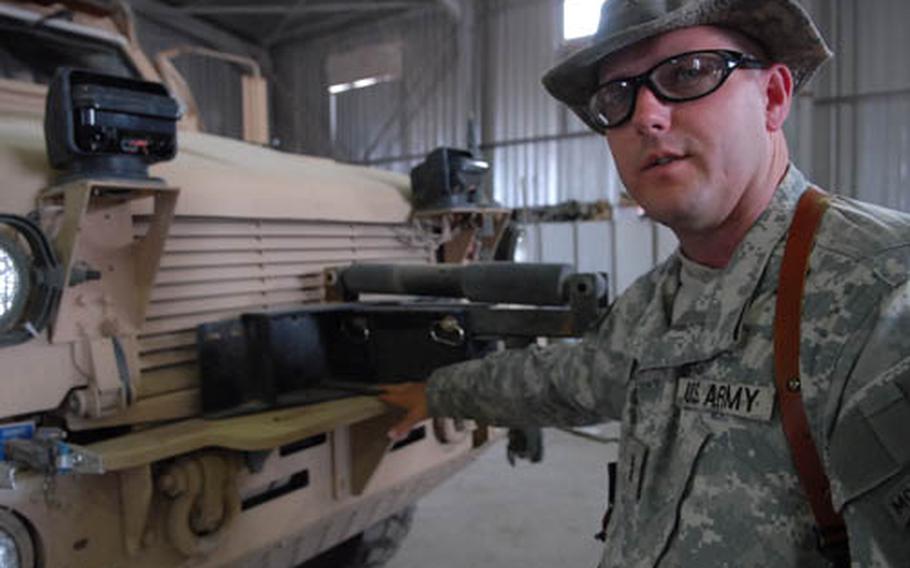 Chief Warrant Officer 4 Rodney Crow shows off modifications Saturday in Kirkuk, Iraq, that were made to an MRAP. Crow redid the bumper so the MRAP can be towed, and another soldier attached a hydraulic system to keep the anti-roadside bomb device from dropping down and cutting off soldiers’ fingers. (James Warden / S&S)

Chief Warrant Officer 4 Rodney Crow shows off modifications Saturday in Kirkuk, Iraq, that were made to an MRAP. Crow redid the bumper so the MRAP can be towed, and another soldier attached a hydraulic system to keep the anti-roadside bomb device from dropping down and cutting off soldiers’ fingers. (James Warden / S&S) 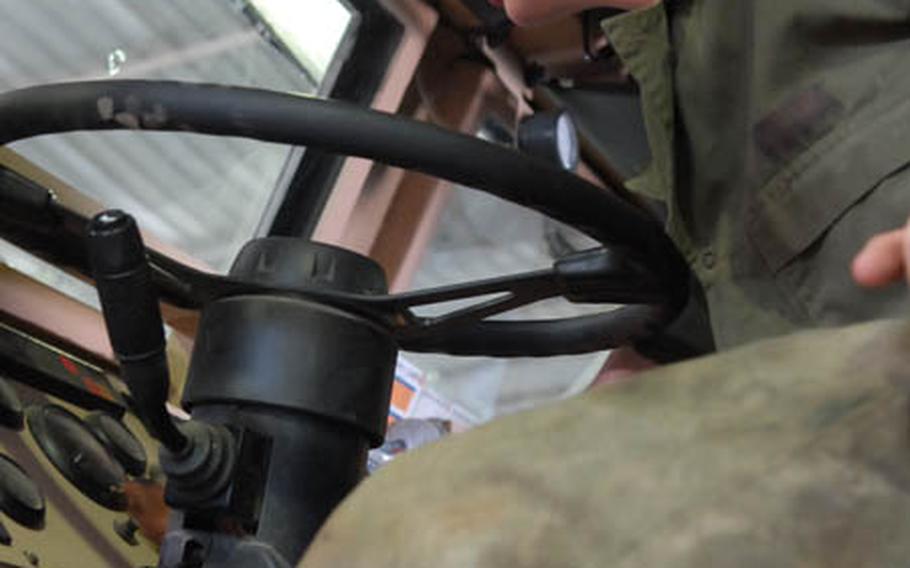 Crow first walked over to the nearest maintenance company, but the soldiers weren&#8217;t working on any MRAPs. He then got on the phone and called around for a few minutes until he at last found a unit with an MRAP under repair.

The scene couldn&#8217;t be more different from the dire MRAP situation CNN portrayed in a story Tuesday. The news channel reported that unnamed officials told them "as many as one in five of the vehicles in Iraq has been out of commission." Alarming as those statistics sound, they don&#8217;t appear to translate to major problems on the ground in northern Iraq &#8212; as Crow&#8217;s search attests.

On average, the 1st Brigade, 10th Mountain Division in Kirkuk has had 93 percent of its MRAPs available at any given time since the unit received the vehicles at the beginning of the year, Crow said. The brigade has 310 MRAPs and has never had more than 28, or 9 percent, out at once.

That rate is only slightly higher than Multi-National Division-North&#8217;s 92 percent readiness rate. The brigade&#8217;s MRAP numbers also compare favorably with the unit&#8217;s more-proven Humvees, which Crow said average a 96 percent rate. All those numbers include both battle damage and maintenance problems, and all are above the Army&#8217;s 90 percent standard.

After the CNN story aired, Defense Secretary Robert Gates was asked if there was a problem getting MRAP spare parts to Iraq and Afghanistan.

"No. My latest information is that the readiness rate on the MRAPs is over 90 percent," Gates said July 9. "There are some specific categories where it may be as low as 87 percent."

He also was asked if the addition of more MRAP vehicles to theater could lead to a scarcity of spare parts.

Like any vehicle, there are tradeoffs to working on the MRAP: "It&#8217;s a lot bigger, so some things are a lot easier to change out," said Spc. Keri Pfeifer, a Company B, 10th BSB mechanic. "At the same time, it has a lot more electrical (systems)."

Part of the reason mechanics have been able to stay ahead is the season in which 1/10th soldiers received their MRAPs, said Lt. Col. Ron Novack, the 10th BSB Commander. If the temperature is above 90 degrees, soldiers cannot take a vehicle without air conditioning on a mission unless they have a general&#8217;s permission. Yet the voltage regulator &#8212; which affects the air conditioning &#8212; was one of the MRAP&#8217;s major problems until the company started using a more rugged regulator.

Because the brigade started using the vehicles in January and February &#8212; when soldiers relied on heating, not air conditioning &#8212; soldiers encountered this problem gradually. They could address the issue before temperatures forced them to leave their MRAPs behind.

"We were able to identify a lot of the problems we were having," Novack said. "There was kind of an accordion effect, and Big Army had a chance to recover."

The Army also changed the way it procured parts for MRAPs, Crow said. MRAPs on the assembly line had priority for new parts when leaders were first trying to get the vehicles out to soldiers. Now vehicles already in the field get first dibs. Items can be pulled right off the assembly line if there&#8217;s a shortage.

Along with that, the Army implemented a quicker way to repair damaged vehicles, Novack said. Units can exchange broken vehicles for working ones when they can&#8217;t get a part instead of just waiting for a part to become available.

The broken MRAP is repaired when the part arrives and then sent back into the field.

Because nearly all the parts on an MRAP are interchangeable, even the most-damaged ones inevitably make their way back to units, Crow said.

Novack also credits the mechanics who work on the MRAPs. Almost all of them are soldiers, although the brigade has several civilian mechanics because light units like 10th Mountain don&#8217;t have enough Army mechanics for the number of vehicles used in Iraq. None of the civilians are specialists supplied by the MRAP manufacturer.

"We&#8217;ve never had a mission fail or altered a mission because of an MRAP," Novack said.