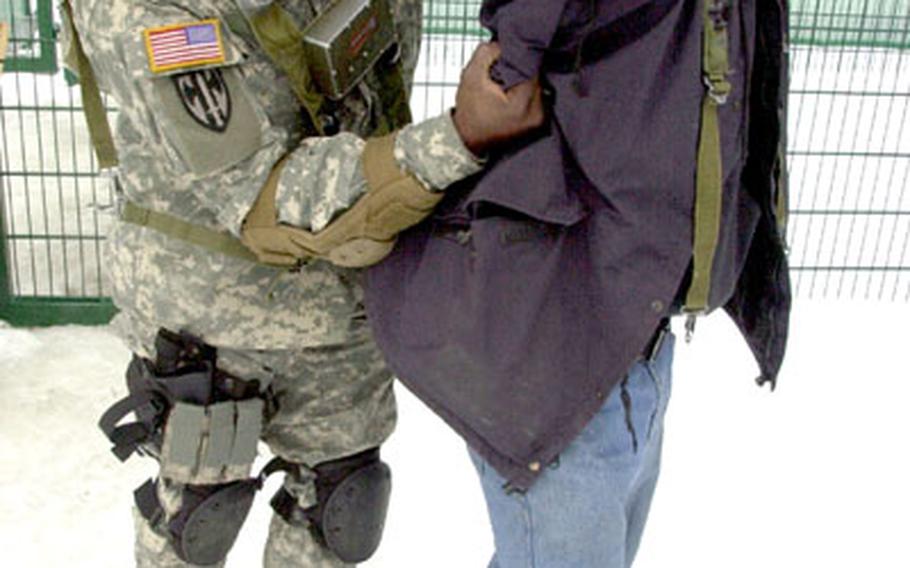 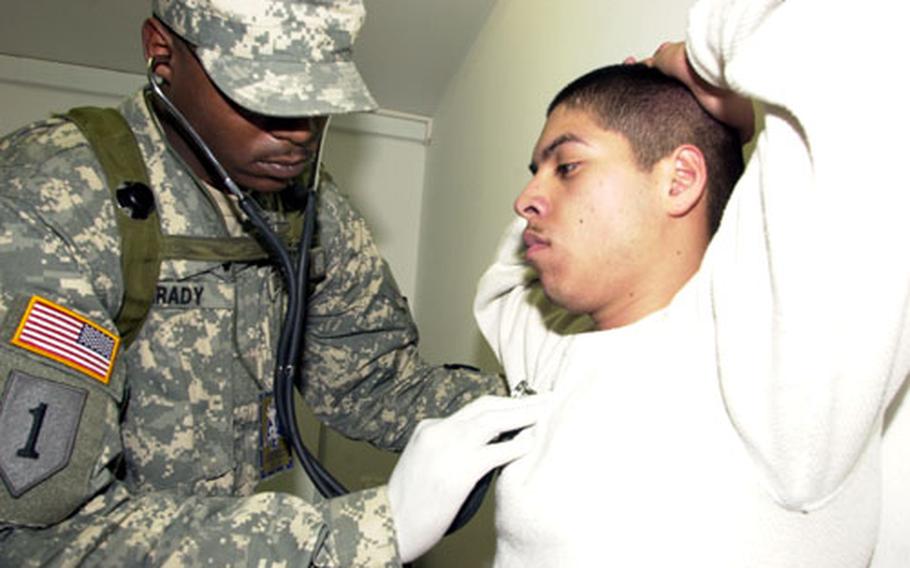 Spc. Willie Ruiz, 21, of Patterson Calif., right, playing the role of an insurgent, gets a medical check at the Brigade Consolidated Collection Point. (Seth Robson / S&S) 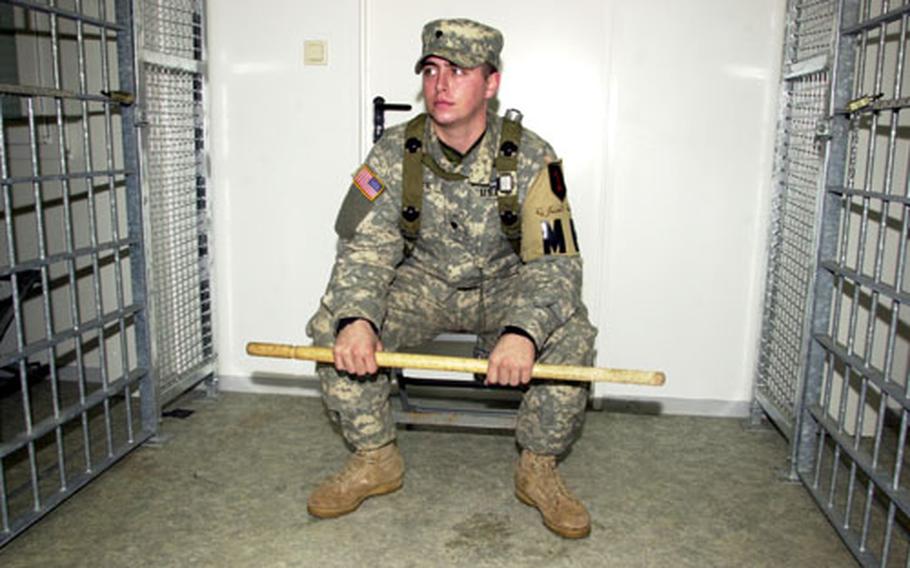 HOHENFELS, Germany &#8212; On the list of rules that detainees of U.S. forces in Iraq must follow, military police say the most important is Rule 8: &#8220;Do not defecate or urinate inside the cell.&#8221;

The MPs, who are part of the 2nd BCT, are staffing a small jail &#8212; known as the Brigade Consolidated Collection Point &#8212; where role players detained during the exercise are kept.

When a detainee is dropped off at the collection point by a 2nd BCT unit, the MPs go to work, first getting paperwork in order listing the name of the detainee, place of capture and the reason the person was detained.

Detainees are searched, personal property is stored in an evidence locker, and their fingerprints and retinas are scanned. A doctor examines them to make sure they are healthy enough to stay in the facility, and a translator makes them aware of the rules.

They are asked to sign a document stating that they accept the rules, which include not talking in their cells, not threatening the guards, not trying to escape and, most importantly, according to the MPs, not using their cells as toilets.

One member of 1st MP Company, 2nd Lt. Brett Kronick, 22, of St. Helena, Calif., said the Hohenfels facility, which is similar to the facility the unit expects to work at in Iraq, holds up to 12 inmates normally and can accommodate another eight in tents, if necessary.

The cells, which are steel cages inside an insulated container, hold up to two detainees each. A screen of poncho liners around one of the cells segregates females and juveniles. Each cell has an Army cot and an MRE (Meals, Ready to Eat). However, the MREs have the heat packs removed to prevent detainees from using hot water as a weapon. Also removed are glass hot sauce bottles and matches, Kronick said.

MPs dealing with detainees are aware of the detainee abuse that happened at Abu Ghraib, he said.

There has already been one attempted escape from the facility at Hohenfels, according to another 1st MP Company soldier, Staff Sgt. Antonio Gonzalez, 29, of Brooklyn, N.Y.

&#8220;When a detainee was being escorted he tried to bolt and run,&#8221; Gonzalez said. &#8220;A soldier escorting him held on and got a piggyback ride for a short time. Then he hooked his leg around the detainee&#8217;s leg and brought him down. It was one of those instinctive moves.&#8221;

Another 1st MP member, Staff Sgt. Raunie Adair, 29, of Slapout, Ala., said some other detainees got upset after a pork MRE was accidentally left in a cell. MREs containing pork are not fed to detainees because most are Muslims and they are barred from eating pork by their religion.