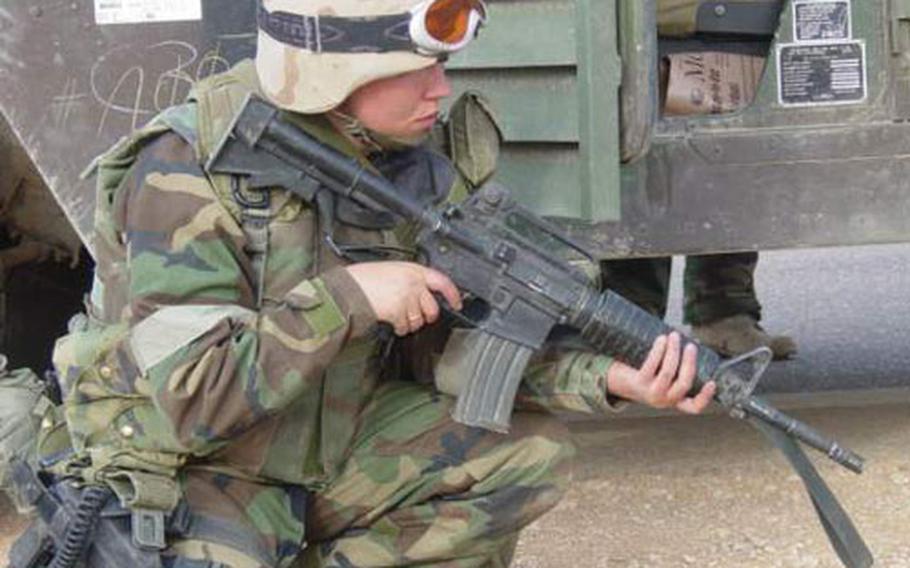 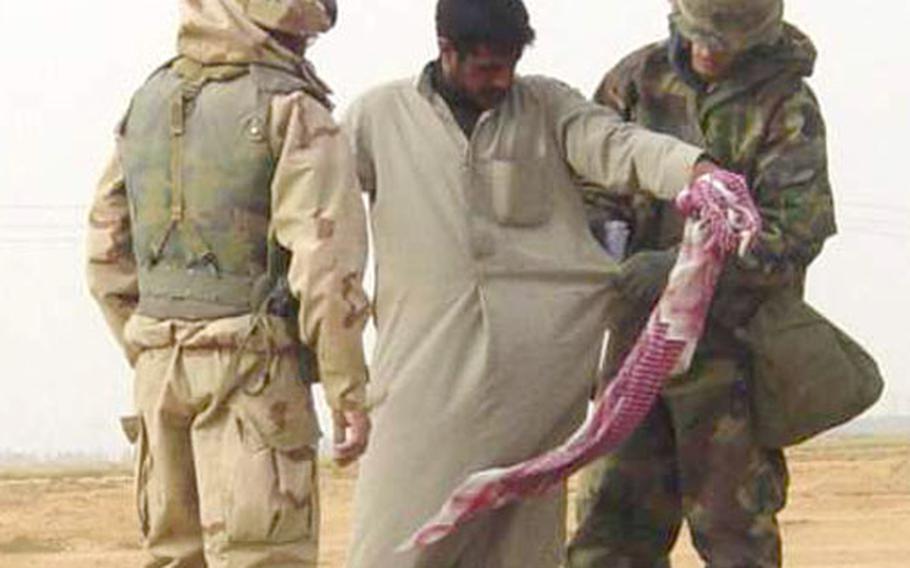 A soldier from the 527th Military Police Company, from Giessen, Germany, conducts a body search on an Iraqi citizen during a random checkpoint in southern Iraq as a translator watches. (Courtesy of U.S. Army) BAGHDAD, Iraq &#8212; Soldiers from the 527th Military Police Company based in Giessen, Germany, have been mighty busy the past six weeks but are finally catching a break.

During the last month and a half, the MPs crisscrossed Iraq, moving from Camp Virginia in Kuwait to Tikrit and Nasariyah in Iraq. They operated rolling checkpoints, escorted convoys, seized massive amounts of weapons and transported enemy prisoners of war.

Two days ago they reached the vice presidential palace in Baghdad, and are now preparing for the next phase of the mission, which is to train and help organize the city&#8217;s police force.

On Sunday, leaders of the 709th Military Police Battalion from Hanau, Germany &#8212; which includes the 527th as well as the 615th MP Company from Grafenw&#246;hr &#8212; met with leaders of the Baghdad police to determine what they need to do next.

Before they start working with the Iraqis, the soldiers have had to spend several days cleaning their new living quarters. They are building makeshift latrines, getting power from generators, pumping out the flooded palace basement and have adopted two dogs &#8212; one blind dog and one puppy &#8212; that live behind the fenced-in compound.

They are also getting a chance to read mail. Life, the soldiers say, has gotten better after the sandstorms and constant movement that had defined their lives.

&#8220;I got seven care packages today,&#8221; said Sgt. Stephen Palazzo, a military policeman from Giessen. In each package were letters, and one even included pictures of his infant son, wife and puppy. His wife had included, in blue paint, a footprint from his son and a paw print from his dog.

1st Lt. Michael Hong, a platoon leader for the 527th, said mail should be more consistent now that the soldiers won&#8217;t move so much.

Soldiers were inundated the past two days with boxes that contained candy, baby wipes, socks, books, letters and DVDs.

Pvt. Joseph Raap, who has been in the Army for nine months, received a box from his cousin that contained an American flag and a pocket watch with an eagle on its cover.

The military police from the 709th, who completed a seven-month deployment to Kosovo in November, arrived in Kuwait in February.

But there was great irony to the training.

Waltman said the deployment has been hard but enjoyable. Their training pretty well emulated what they encountered in Iraq, he said, and no one has been seriously hurt. &#8220;That&#8217;s the good news,&#8221; he said.

Being a military police officer, though, is one of the better slots in the military, he said.